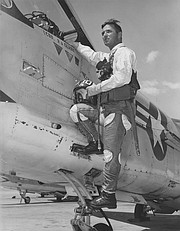 Clark, a child of the "Roaring Twenties," grew up in a New York City orphanage. Upon graduation from high school, he got his first job with Look Magazine.

It was from a later job at the Alcoa Aluminum Company in Fairfield, Conn. that Clark entered the U.S. Navy in December 1942. Qualifying for naval air training, Clark spent 16 months as a naval cadet. Assigned to the Bombing/Fighter Air Group 17, flying the F6F Hellcat, Clark spent a month on Guam Island before boarding the aircraft carrier Hornet (CV-12) on Feb. 1, 1945. Hornet completed a 10-day shakedown cruise on the way to Ulithi Atoll, a then secret naval base in the Caroline Island chain. From there she steamed as part of Task Force 58 toward Japan. On Feb 16, Clark participated in the first carrier air strikes on Tokyo since the Doolittle raid three years earlier.

On March 4, Clark got a brief respite from combat operations. Hornet returned to Ulithi for a short rest period. As part of a select group of 12 pilots, however, Clark was chosen to ferry some severely battle damaged "flying dud" aircraft back to Guam for repair or cannibalization. The fighter assigned to Clark had taken a hit from a Japanese 5-inch anti-aircraft gun at Iwo Jima. It had many shell perforations on the starboard side, holes in the cockpit and seat, and an engine which Clark wrote, "... sounded like Hell. Popped like corn ... Glad to be out of that pile of junk." After the 350-mile flight to Guam, Clark was back aboard Hornet at Ulithi three days later.

In mid-March, Hornet resumed attacks on the Japanese mainland, this time against Japanese airfields on Kyushu. Clark was part of a 20 fighter attack group heading for Kure naval base when the force encountered a flight of about 60 Japanese fighters heading toward the Hornet's task force. The American fighters immediately engaged the enemy in a dogfight above an inland sea. Clark was attacked by an enemy "George," Japan's most capable fighter which entered service only at the end of the war. After the enemy turned into him, firing all the way, Clark maneuvered his Hellcat into a tail-shot position and fired his machine guns. The "George" smoked, splintered, burned and crashed; Clark's first kill. Soon after, Clark heard a loud crash and realized he had been hit in the starboard wing by a trailing Japanese "Zeke (Zero)." Clark rolled his Hellcat and split out, coming around for an attack from the side against the "Zeke." He saw tracers hit the engine and shatter the cockpit canopy of the enemy plane which crashed into the sea. This was Clark's second kill on the same day. Out of ammunition, and with only a handful of enemy planes remaining, he returned to the Hornet with 12 other Hellcats from his group as still another Kamikaze attack against the task force was underway. Clark was awarded his first Distinguished Flying Cross for his actions that day.

USS Hornet then began preparations for the invasion of Okinawa. Clark flew missions against the Okinawa mainland as well as troopships and supply ships enroute to Okinawa. On April 1, Clark flew ground support missions, dropping napalm on enemy targets as marines were landing on the island. Strikes in support of Okinawa operation continued until April 7 when Clark and his unit joined a group of 360 carrier aircraft to attack a Japanese fleet off the main island of Kyushu. It was during this raid that the Japanese super-battleship Yamato was sunk as well as an aircraft carrier and six destroyers.

After a few days of routine patrols, on April 12, the fighters of USS Hornet intercepted numerous enemy aircraft including one flight of "Kate" torpedo bombers and "Jack" fighters attacking the task force. Three of the "Kates" were downed by Clark's fellow fliers as Clark chased a "Jack" at 500 feet in close proximity to the U.S. carriers. He shot the "Jack" out of the air, his third kill, but a 40 millimeter shell fired from his own ship almost blew the tail off his Hellcat. Despite the damage, he managed a safe landing.

Two days later, Clark scored his fourth and fifth kills, both "Zekes," during a 90-minute dogfight. Clark qualified as a Fighter Ace and was awarded a second Distinguished Flying Cross for his heroism.

The following day, as other Hornet aircraft struck ground targets on Okinawa, Clark was part of a fighter sweep of 220 planes launched against Kyushu Air Base, some 240 miles distant. The force accounted for nine more enemy planes, contributing to the Hornet's daily total of 42 destroyed. One day later, April 16, Clark again headed to Kyushu on another fighter sweep. The group encountered a flight of 20 "Zekes" over the attack area, of which 13 were shot down, including Clark's sixth kill.

After more almost daily strikes on Okinawa, Clark and Hornet arrived back at the Ulithi base for repairs and re-provisioning on April 30. The day after the German surrender in Europe (VE Day) on May 8, Hornet began her last combat sortie of the war, returning to Okinawa to support ground operations. Her pilots then flew numerous missions against the Japanese homeland. On May 19, Clark was awarded his third Distinguished Flying Cross for his overall service in the Pacific campaign.

In September 1945, after 33 months of active service, Ensign Robert A. Clark left the Navy in Jacksonville, Fla. and returned to civilian life, although he remained in the U.S. Naval Reserve. From 1946 to 1950, he took advantage of the GI Bill and attained a degree in English literature from Wesleyan University in Middletown, Conn.

In February 1951, Clark was recalled to active Navy duty for the Korean conflict. He returned to flight school to be checked out on jet fighters; then he was assigned to Fighter Squadron 831, Air Group 15 aboard the aircraft carrier USS Antietam (CV-36) in January 1952. Piloting a F9F Panther fighter jet, Clark began flying combat missions over Korea the following month. By mid-March 1952, he had completed 20 combat missions. From October through December 1952, Clark completed 20 more combat missions launched from USS Antietam.

With so much active and reserve service under his belt, Clark decided to make the Navy a career. In July 1955, Clark rejoined the crew of USS Hornet for a cruise to the western Pacific. Hornet encountered 13 severe typhoons which extensively damaged the ship, forcing an early return to San Diego. The damage spurred the development of a new "hurricane bow" which is a feature of all modern carriers. In 1957, Clark served as Officer in Charge of the aerial reconnaissance unit aboard the carrier USS Randolph (CVA-15).

By 1961, Clark had been promoted and assigned to Washington D.C. He met and married his "Farm Girl," Darlene, who was from Rheatown, Tenn. but worked in D.C. for the Navy Department.

SHORTLY AFTER THEIR MARRIAGE, Clark was assigned as Executive Officer, and later Commanding Officer of the VU-10 Fleet Utility Squadron at Guantanamo Bay, Cuba. The unit operated combat and support aircraft to assist the fleets during training operations and provided escort services for unarmed U.S. aircraft flying in the vicinity of Cuba. With the start of the Cuba Missile Crisis on Oct. 22.1962, the squadron was called upon to perform to the maximum of its capabilities. The first order of business for Clark's unit was the evacuation of all U.S. dependents from the island. The unit took on the role of primary air defense for Guantanamo and flew continuous combat air patrols over the base. Working closely with the Navy's VFP-63 light reconnaissance squadron at the Jacksonville, Fla. Naval Air Station, F8U Crusader aircraft of Clark's unit flew numerous photo-recon missions over Cuba to document the Soviet missile build-up. This photography was flown immediately by couriers in the supersonic Crusaders to Andrews Air Force Base where they were met by helicopters which delivered the film directly to the White House. These photos are now an important part of American history. Clark said that it got mighty lonely flying up the east coast at 2 a.m. with just himself "and the Man in the Moon."

Deciding that he and Darlene would settle in the Washington area, he bought a home in the Mount Vernon area and began a new career as a Navy civilian employee, writing and producing Navy training and documentary films for a number of years. His last film was entitled "Kamikazi." He later worked for 10 years in the Office of the Chief of Naval Operations as a foreign military sales specialist. Clark retired for the second time and last time in 1984.

In retirement, Clark continued to enjoy flying in his WWII vintage, open cockpit Fairchild PT-23 Navy trainer. He would also hitch the occasional ride with his "Hurricane Hunter" buddies in Isla Grande, Puerto Rico. He relished going to the "getaway house" he and Darlene acquired in her hometown of Rheatown. Until the age of 90, Clark loved to take walks along Mount Vernon Parkway and play tennis with his friends.

Clark is survived by Darlene Clark, his beloved wife of 53 years, their daughter, Terry Clark, son-in- law, Robert S. Clark, and grandsons Trey and Tyler Clark, all of Alexandria.