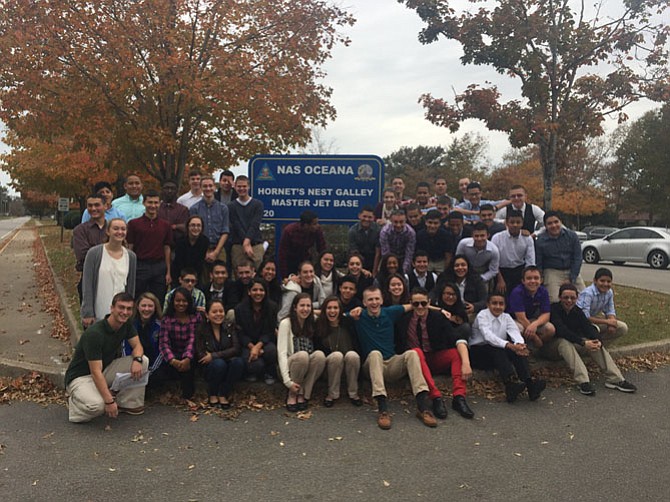 Cadets pose for a picture outside of the Hornet's Nest, the most obvious place for Herndon Hornets to enjoy breakfast.

The Ship Control Console on the USS WASP is impressive.

The Herndon High Navy Junior Reserve Officers Training Corps (NJROTC) departed Herndon on Friday, Oct. 30 for a three-day and night orientation field trip to Virginia Beach and Norfolk. The purpose of this and similar annual trips is to familiarize the cadets with active duty sailors and marines serving on ships and aircraft squadrons in the fleet. This helps cadets make better career decisions, and it exposes them to some of the most professional and hardworking servicemen and servicewomen on active duty.

The cadets arrived at the Virginia Army National Guard Barracks at approximately 11:30 p.m., and they quickly moved into open bay accommodations and prepared for the next day. Early Saturday morning, the cadets ate breakfast at the Naval Air Station Oceana’s appropriately named “Hornets Nest Galley” and then proceeded to the Naval Shiphandling and Simulation Facility at Norfolk Naval Base. After a warm welcome by the manager, Captain Mike Turner, USN (Ret.), cadets split into groups and entered the ship simulators. They learned to drive frigate-sized ships in accurate pilothouse settings. Realistic simulations with 60 knot winds and heavy seas caused some to have to step out to prevent sea sickness, but most endured and enjoyed driving their ships around a harbor.

The cadets then headed over to the USS WASP (LHD-1) for a tour of this front-line amphibious warship. Cadets first explored the well deck, where Landing Craft Air Cushions and other amphibious craft used by marines to land ashore are launched. Next, they visited the flight deck, where helicopters and vertical takeoff and landing aircraft operate. Finally, they saw the pilothouse, where the captain and navigation team drive the ship near shore to support Marine Corps landings. After paying their respects to the ensign flying on the fantail, cadets departed down the pier.

The next stop was to the newest U.S. Navy attack submarine, the USS JOHN WARNER (SSN-785). Cadets toured the torpedo room, the extremely cramped crew quarters, the conning tower attack center and parts of engineering.

After returning to the barracks to change into civilian clothes, the cadets spent the evening at the Navy Morale, Welfare, and Recreation bowling alley on Naval Air Station Oceana. There, they had a great time bowling and eating pizza.

Sunday, the cadets enjoyed downtown Norfolk, where they saw the Nauticus Museum and the WISCONSIN (BB-64). They also had a short visit to the MacArthur Memorial.

Before returning home on Monday, the cadets cleaned the barracks and presented them for a field day inspection to the Army National Guard. After passing the rigorous inspection, they spent the morning visiting the Swift Boat Squadron at Little Creek. Cadets helped Navy gunner’s mates assemble small arms at the gun shop, and then they took a tour of some of the latest small yet powerful swift boats, which the Navy uses along rivers and in shallow waters. After spending time testing their skill against computer targets at the electronic gun range, the cadets bade farewell to the sailors that hosted them and headed back to Herndon.