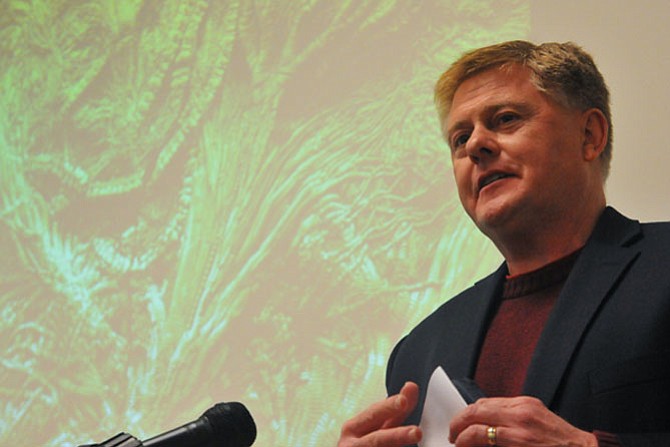 Fairfax County Supervisor John Cook reads from the “Green Pasture,” “I know a painting so evanescent that it is seldom viewed at all, except by some wandering deer. It is the river who wields the brush, and it is the same river who, before I can bring my friends to view his work, erases it forever from the human view.” Photo by Louise Krafft. 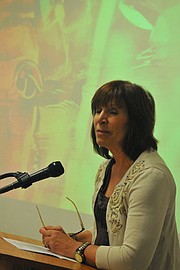 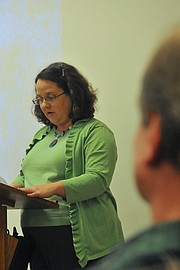 The read-a-thon involved public readings of 3-5 minute sections of the Almanac and was held at the Ellen Coolidge Burke Branch Library. Following the read-a-thon and a celebratory birthday cake for Leopold there was a showing of “Green Fire” a documentary film about Aldo Leopold. 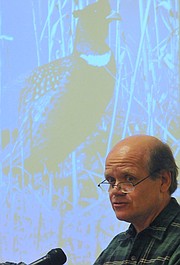 NVCT board member Greg Evans begins his reading of Leopold’s “January Thaw,” “… the hibernating skunk, curled up in his deep den, uncurls himself and ventures forth to prowl the wet world, dragging his belly in the snow. His track marks one of the earliest datable events in that cycle of beginnings and ceasings we call a year.”

The Northern Virginia Conservation Trust is a regional, nonprofit land trust founded in 1994. Since its founding, NVCT has preserved 6,410 acres of land in Northern Virginia and is accredited by the Land Trust Accreditation Commission. For more information on the trust and its activities visit www.nvct.org.