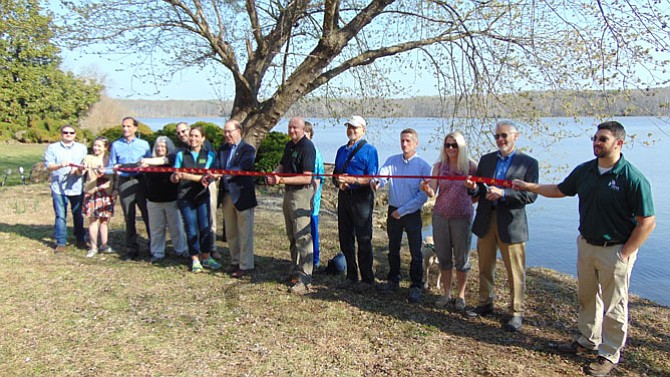 The official ribbon-cutting ceremony for the purchase of the Stribling property at Pohick Bay Regional Park. Photo by Steve Hibbard.

A ribbon-cutting ceremony was held Saturday, April 14, 2018 for a new 3.2-acre parcel of land known as the Stribling property, which was purchased by the Northern Virginia Regional Park Authority and will be added to Pohick Bay Regional Park.

The waterfront property valued at $2.1 million is situated on the Mason Neck peninsula in a lot located within the current park borders that had served as a private property before Pohick Bay was a regional park.

“We’re really excited to add another piece of parkland to the Northern Virginia Regional Park Authority System and also to the land that we’ve preserved on Mason Neck,” said Paul Gilbert, Executive Director of the Northern Virginia Regional Park Authority (NOVA Parks). “It’s a beautiful property overlooking Pohick Bay. It has water access; it’s right near our camping facilities. And it’s a great addition to the park and will serve the public for generations to come.”

“We actually have 1,800 acres on Mason Neck – 1,000 acres is Pohick Bay Regional Park, and another 800 acres, which is part of the land that we lease to the U.S. Fish and Wildlife Service,” he said. “So, we’ve been involved in preserving land on Mason Neck from the very beginning.

“We preserved the first piece of land here in the 1960s and have been adding to it ever since. Having parkland is a critical part of having a good community and good resources for the public. A key test for any park agency is, is it growing? Because we have to be growing our land base of parkland as our population grows,” he said.

THE PURCHASE was made possible through a series of conservation grants, including the Land and Water Conservation Fund as well as the Virginia Land Conservation Foundation. In addition to the grants, a below market rate loan was provided by the Virginia Clean Water Revolving Loan Fund, administered by Virginia Resources Authority. The property will also be protected by a conservation easement held by the Northern Virginia Conservation Trust (NVCT) to further ensure the conservation vision for this parkland.

Michael Nardolilli, Chairman of NOVA Parks, said: “As our region’s population grows, so does the necessity for more public parkland. The Board and staff of the Northern Virginia Regional Park Authority are committed to doing our part to provide for the increasing needs of park patrons.”

He added: “The land portfolio of NOVA Parks has grown by 20 percent over the past decade or an additional 2,000 acres. So, if we put that in terms that we can all understand, 2,000 acres is about three-square miles of new public parkland over the past 10 years -- or that would be three Arlington National Cemeteries. And in our area where land is a premium, that really makes a difference.”

Supervisor Dan Storck (D-Mt. Vernon) added: “There’s a lot of history here. A lot of the quality of life for this area is about the parks and the green space that we have here. Mount Vernon District has amazing numbers of options and resources and opportunities for people to enjoy the natural world. And even the parts of the natural world that man has intervened, even those are some amazing places along the Potomac and Mt. Vernon Estate, and the fact that we have woods and views like this.”

According to Katie Weidenfeller, a NVCT Board member: “This property wouldn’t be happening today if it weren’t for the partnership…. The Northern Virginia Conservation Trust’s role in this partnership is to make sure this land stays like this and it remains a place for wildlife -- for people to enjoy nature in perpetuity. That’s what land trusts do. We are institutions that protect land forever. So, this land will be here for your grandkids and your great-grandkids and hopefully they’ll be able to see this beautiful view as well.”

Added Glenda Booth of the Virginia Land Conservation Foundation: “It’s a rare opportunity and an honor to be able to preserve anything and especially a parcel here on the river. And the Foundation chose this project…. This was chosen and recommended by the staff and chosen by the Board because of its location on the Potomac River and its adjacency to a conserved area to a park. The Board believed it could also contribute to public recreation in our area and to water quality of the river and to the overall integrity of the Mason Neck Peninsula.”

According to Brian Bauer, Marketing and Communication Administrator with Northern Virginia Regional Park Authority. “This was the Stribling properly formerly when the park was created many years ago. This property remained a private residence and only recently did the owner decide that it was time to sell, and fortunately for us, she approached us first.”

Gilbert said in the near future, the property won’t change dramatically. The two existing houses on the Stribling property could be rented to park staff. In the longer term, he said it could be used for overflow camping.

“It’s a beautiful site where folks could launch a canoe or kayak. We could have tent camping or small cabins that would be a nice addition to that because our camping facilities continue to be very popular. They’re busier now than they’ve been for decades,” said Gilbert.

NOVA Parks was founded in 1959 as a regional park agency with parks in Arlington, Fairfax, and Loudoun counties, and Alexandria, Fairfax and Falls Church. It has about 12,300 acres and 33 parks, much of it protecting the rivers and waterways of our region. Pohick Bay Regional Park offers a variety of amenities for its users, including camping (tents, cabins and RVs), trails, golf, boating, playgrounds and a waterpark.