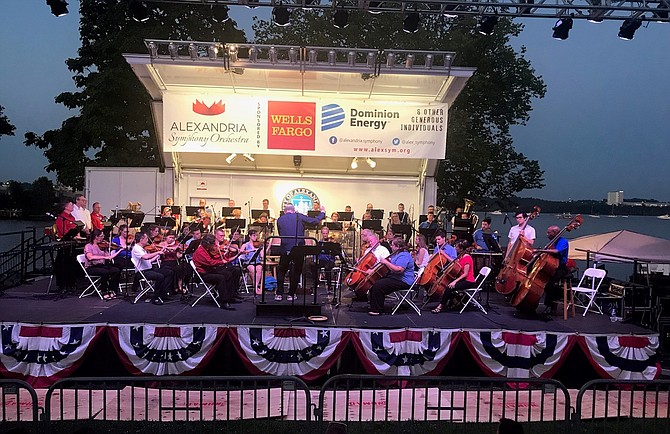 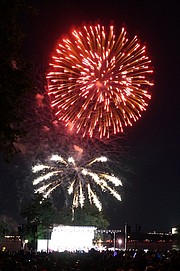 Fireworks light up the sky over the Potomac River in the finale of the City of Alexandria’s 270th birthday celebration July 13 at Oronoco Bay Park.

A member of the Presidential Salute Battery of the 3rd United States Infantry Regiment, Joint Base Myer-Henderson Hall, also known as “the Old Guard,” gives visitors an up close look at one of the cannons used in the finale of the city’s birthday celebration.

The skies over the Potomac River lit up with fireworks and cannon fire July 13 as the City of Alexandria celebrated its 270th birthday at Oronoco Bay Park.

“What an incredible fireworks display,” said Cindy Golubin of TTR Sotheby’s International Realty. “In all the years I have been coming here, I think this was the best fireworks display yet.”

The main attraction was the ASO, led by Maestro James Ross, and its performance of the “1812 Overture” complete with cannon fire over the Potomac River.

The Old Guard was represented by 14 platoon members in ceremonial uniforms, who gave up close tours of the cannons during the day and enjoyed a lunch sponsored by the Old Dominion Boat Club.

“We could not have asked for better weather,” said Greg Golubin, who hosted a community group picnic to view the fireworks. “This is one of the best things the city does each year. As long as I am able, I plan to keep coming back.”