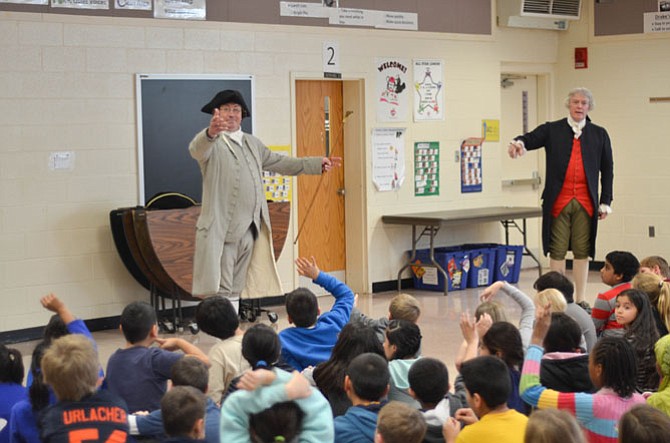 School children in eight Fairfax County Public elementary schools had the opportunity to hear and speak with Founding Fathers Thomas Jefferson and Patrick Henry in January. Historical re-enactors Bill Barker and Richard Schumann, respectively, assisted with the experience. The re-enactment was made possible by CarolAnn Babcock of Reston and her husband, Jim. For about eight years, the couple has sponsored educational programs for Fairfax County schools through the Colonial Williamsburg Foundation. 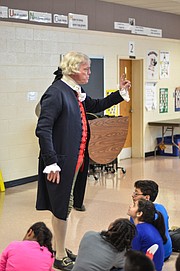 Historic re-enactor Bill Barker portrayed third President of the United States Thomas Jefferson at FCPS Dranesville Elementary in Herndon on Jan. 6. The presentation was shown to students in both the fourth and sixth grade.

Despite a morning snowfall on Tuesday, Jan. 6, both Thomas Jefferson and Patrick Henry were able to successfully visit Fox Mill Elementary in Herndon, followed by a visit to Dranesville Elementary in Herndon. At both locations, the re-enactors were able to speak about their experience before and after the American War for Independence, as well their view on other matters such as sports and travel.

The third president talked to student about topics such as proper English manners and how at a young age, he realized the English colonies in America had been developing separate American traits. Jefferson mentioned he was at one time astounded to hear a speaker at the Virginia House of Burgesses, and at this point introduced Patrick Henry.

A SYMBOL of America's struggle for liberty and self-government, Patrick Henry was a lawyer, patriot, orator, and participant in virtually every aspect of the founding of America. As a member of the Virginia House of Burgesses, Henry sparked the American Revolution in the English Colony, and was elected the first governor of the Virginia Commonwealth, serving five terms.

During the visits to the schools, the re-enactors took questions from the student audience. Jefferson and Henry used the questions to reach to topic on citizenship, and mentioned how they wished good relations could develop with the Native Americans. One student inquired how long it took for letters to get form one location to another. Another student asked a question regarding books on iPads. Re-enactor Bill Barker did not miss a beat. “What is an iPad?” asked an inquisitive Jefferson.

Two Dranesville Elementary teachers who will be participating in the summer workshop included fourth grade teacher Kristine Petersen and sixth grade teacher Nancy Borick. “It will be an amazing opportunity to look at history inside out,” said Petersen. Both teachers were impressed by the re-enactment program. “I felt they made it very accessible for the kids,” said Petersen.

“The students were wonderful, sharp as a tact and had good questions,” said re-enactor Richard Schumann. “This is one of the most important missions Colonial Williamsburg can do, civilizations which lose their identity by ignoring history will face rough times,” said Schumann. Schumann has portrayed Patrick Henry at Colonial Williamsburg for over 16 years.

“I love that it made history come alive for the students, it helped make history real,” said Dranesville Elementary fourth grade teacher Sandy Coyner, a resident of Herndon. Many of the teachers saw the program as an educational treat. “The re-enactors were very good,” said Dranesville Elementary fourth grade teacher Sean Gray. “I would love for them to come back, they were both authentic and engaging,” said Gray.

THE BABCOCKS started by reaching out to schools near their Reston home, but since then, their reach has expanded to sponsor programs at 15 schools. The January school assembly and re-enactments continued the following days to Reston schools including Lake Anne Elementary, Sunrise Valley Elementary, Hunter Woods Elementary. Other FCPS schools visited included Westbriar Elementary in Vienna, Kent Gardens Elementary in McLean and Greenbriar East Elementary in Fairfax. “With so many children from other countries and cultures attending our schools today, it is all the more important for them to get a glimpse of the social and political foundation upon which this country and our republic form of government is based,” said CarolAnn Babcock. “In some 10 to 12 years they will be in the voting booths steering our nation.”