Winter is a great time to see Eagles. 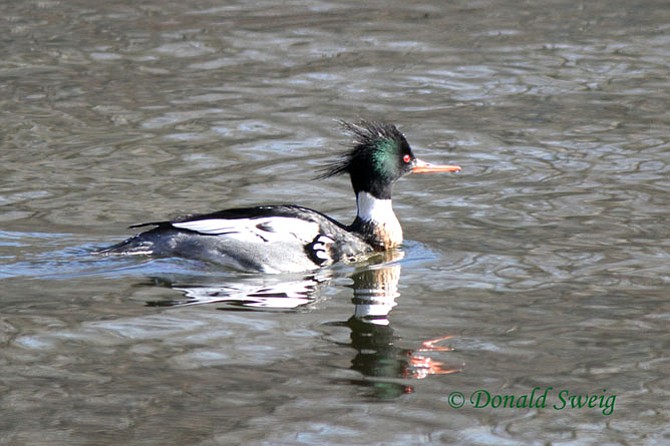 A pair of nesting bald eagles and often colorful, transient, wintering waterfowl are two of winter's best attractions on the 218-acre Burke Lake, at Burke Lake Park in Fairfax Station. The very large Eagle nest high in the naked leafless trees is easily seen from the shoreline by the boat launch or from the floating pier nearby; just look across the lake to the north.

On any given day you may or may not see the eagles on or near the nest. Bald eagles tend to use the same nest year after year, adding additional sticks and branches each year until the nest can become quite large and quite heavy, as much as 7 or 8 feet in diameter and 10 or 12 feet deep, and weighing 1,000 pounds or more. The Burke Lake eagle nest has been there for a number of years.

Bald Eagles, in the mid-Atlantic/Chesapeake region usually mate and lay eggs in mid-February. They incubate the eggs for about a month (34 to 36 days) before the chicks hatch, and then it takes about 10 to 12 weeks before the young, juvenile eagles are ready to fledge and leave the nest.

In late January or especially early February the adult eagles can sometimes be seen mating on a branch or snag near the nest. Soon after, one may see a white head slightly sticking above the edge of the nest as the eagles incubate their eggs.

When first hatched, the young eagles chicks will be too small to see in the nest; by late April or early May the chicks may be large enough to be seen with a pair of binoculars or the little telescope. By June the juvenile birds are nearly fully grown and can sometimes be seen walking and bounding around in the nest, and flapping their wings, although at this point they're still being fed by their parents. By mid to late June they should be fledged and have left the nest.

Young Bald Eagles are almost entirely brown when they first leave the nest; by the end of the first and during second year they begin to get some transient white on the body or under the wings. Late in their third year, and during their fourth year they become sexually mature and get the white heads and tails that are so characteristic and charismatic of our national bird. If you would like to see the eagle nest, and perhaps the eagles in it or nearby, take some binoculars and have a look for yourself from the boat launch area or the floating pier. Bald eagles are a very special bird, they're always fun to see.

Also, most winters, particularly in late January, all of February, and in early March, Burke Lake also hosts a good variety of interesting, often colorful, and beautiful wintering waterfowl. One may see Common, Red-breasted, and Hooded Mergansers, Common and Red-throated loons; Bufflehead, Ruddy ducks, Ring-necked ducks, Gadwall, Pied-billed and Horned Grebes, and in 2014 even a number of White-winged Scoters.

Just going to look is all part of the adventure; one never knows what one may find. (Perhaps even a Common Goldeneye … you never know). Most of the waterfowl should be easy to see; take some binoculars and some kind of a bird book guide if you have one. The birds are frequently in the middle of the lake or flying back-and-forth over the lake. They are often or usually visible from the shoreline at the boat launch, on the path that goes around to the north toward the dam, or from the dam itself.

So go have a look. The winter wonders at Burke Lake may just be too good to miss.