Romance and Reproduction Are Underway
Votes

Romance and Reproduction Are Underway

Our area is awash in bald eagles preparing for offspring. 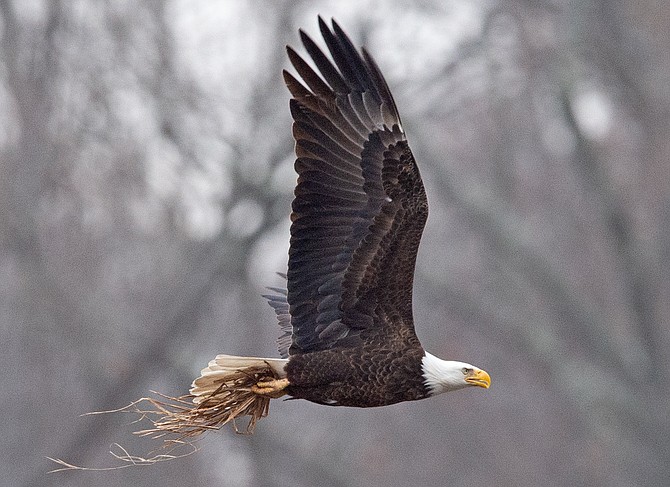 Bald eagle bringing grass to nest. Both sexes help build the massive nests, which they line with grasses and other finer materials. Photo by Randy Streufert

Two bald eagles calling. For such large birds, some observers consider their call to be weak.

Three bald eagle chicks in a nest, not yet fledged. Bald eagles are mottled brown until their fifth year. Chicks fledge between May and July.

In the grip of mid-winter’s cold and Covid isolation, romance may be but a fleeting fantasy for humans, but among area bald eagles, romance and reproduction are well underway.

On Jan. 18, while clipping English ivy off Dyke Marsh’s trees, volunteers were transfixed by a bald eagle pair mating. On Feb. 3, Ed Eder watched a male take a fish to the female who was incubating eggs. In December and January, locals saw eagles carrying sticks to nests.

Bald eagles (Haliaeetus leucocephalus) mate for life and typically return to their previous year’s site and add to their nests. The nests, usually near water, are five to six feet in diameter and two to four feet tall, some of the largest nests in the world weighing up to 4,000 pounds. Females incubate two to three eggs for five to six weeks. Between May and July, chicks fledge, when anadromous fish swim up the Potomac to spawn.

Mature bald eagles have a snow-white head and tail, a yellow hooked bill, yellow talons and a chocolate-brown body. Those under five years old are mottled brown. Adults can weigh from 10 to 14 pounds and have an eight-foot wingspan.

They are powerful flyers and often perch, monitor their surroundings, swoop down and grasp their prey in their talons. They eat mostly fish, but also gulls, small mammals, snakes and waterfowl.

Local fans have not yet located all active nests this year, but in 2020, there were three active bald eagle nests in Dyke Marsh and one in Fort Hunt Park. Mason Neck had at least 25 active nests in recent years, approximately 50 year-round resident bald eagles and up to 100 in the winter. Fort Belvoir typically has six or seven active nests. To ornithologists, “active” means that pairs are tending to a nest or eaglets.

In the 1700s, there were around 100,000 nesting bald eagles in the lower 48 states. By 1963, the numbers had plunged to 417 known nesting pairs. Scientists determined that DDT and other compounds in pesticides moved up the food chain and thinned eggshells so severely that the shells broke and chicks failed to hatch. In 1967, the U.S. Fish and Wildlife Service (FWS) listed the bald eagle as endangered. Congress banned DDT in 1972 and numbers began to inch up. In 2007, FWS announced the bald eagle’s recovery and removed it from the endangered species list, but it is still protected under other laws.

While the bald eagle has been America’s national emblem since 1782, the bird has had detractors, the most famous being Benjamin Franklin who wrote, “He is a Bird of bad moral Character. He does not get his Living honestly. You may have seen him perched on some dead Tree near the River, where, too lazy to fish for himself, he watches the Labour of the Fishing Hawk; and when that diligent Bird has at length taken a Fish and is bearing it to his Nest for the Support of his Mate and young Ones, the Bald Eagle pursues him and takes it from him. ... Besides he is a rank Coward: The little King Bird not bigger than a Sparrow attacks him boldly and drives him out of the District.”

While bald eagle numbers have risen, some threats remain, especially habitat loss. “The most destructive human activity is the development of waterfront property. Because eagles depend on shoreline habitats and aquatic food sources, human development in these coveted areas poses the greatest threat to the bald eagle’s survival,” says the American Eagle Foundation.

Bald eagles that ingest lead bullets or fragments after feeding on animals can be poisoned. They can collide with vehicles, wind turbines and power lines. In August, someone shot two Highland County bald eagles.

They may be adversely affected by pollution from mercury, fire retardants and prescription drugs taken by humans that end up in the waterways. A few years ago, the Virginia Wildlife Center was unable to save an eagle with a stomach full of plastic, a balloon and a thumbtack. Then there’s climate change. The National Audubon Society projects that by 2080 only 26 percent of the bald eagle’s current summer range will remain. Most bald eagle mortality is attributed to humans.

Fortunately, this majestic, “cowardly” bird is thriving along many Virginia waterways and still deserves protection.