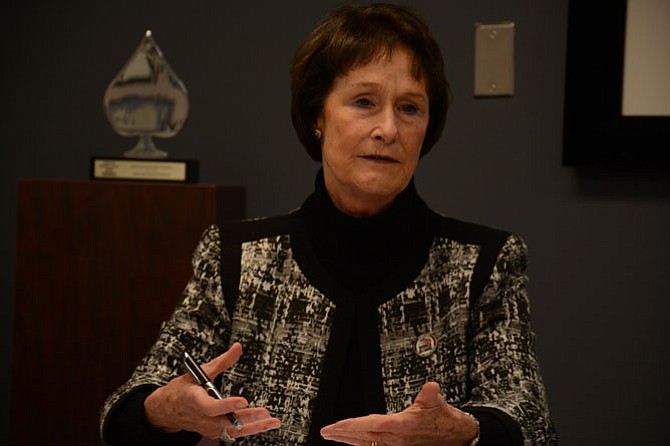 Board of Supervisors chairman Sharon Bulova speaks at the 2015 State of the County Address video release. Photo by Tim Peterson.

Despite a projected shortfall of nearly $100 million facing Fairfax County going into the FY 2016 budget, Board of Supervisors chairman Sharon Bulova remains encouraged by a 2014 that she said was full of accomplishments.

“We can’t stop pedaling,” she said in a question-and-answer session following a screening of her 2015 State of the County address video. “It becomes increasingly harder, with reduced revenue stream from past years. It just continues to be not easy.”

The chairman’s half-hour address, released Wednesday Jan. 14, highlights transportation improvements around the county, including the opening Phase I of the Metro Silver Line, two new VRE stations, the Bus Rapid Transit and Metro extension hybrid option being looked at for the U.S. Route 1 corridor and the December opening of the I-95 Express Lanes.

“With our current population at over 1.1 million residents and growing,” Bulova said in the address, “Fairfax County is planning ahead when it comes to county services, redevelopment opportunities and transportation options in our community.”

When asked if the growth has yielded a similar growth in non-residential revenue for the county, Bulova responded that they are seeing “some increase.” While some new development buildings aren’t full yet, she didn’t express a concern for overbuilding.

Fairfax County Public Schools superintendent Dr. Karen Garza appears in the video, highlighting the projected growth of the school system to over 200,000 students by 2020, its growing special needs population and academic achievements that “continue to exceed their counterparts in the state.”

Garza also noted the adoption of the FCPS “Portrait of a Graduate” set of ideals as part of a long-term strategic plan for the school system that’s under development.

“Graduates should leave FCPS knowing how to be a communicator, collaborator, ethical and global citizen, creative and critical thinker, and goal-directed and resilient individual,” she said.

FCPS is facing a significant deficit of its own, as Garza outlined in the recent release of her 2015-2016 school year budget.

The county’s budget process will advance in February when the county executive Edward Long brings forward an Advertised Budget.

Whether residents can expect a property tax increase to cover the county’s shortfall, Bulova said, “We’ll see what he puts on the table.”

The full video of the State of the County address has aired on Channel 16 and can be viewed on the chairman’s homepage at http://www.fairfaxcounty.gov/chairman/.