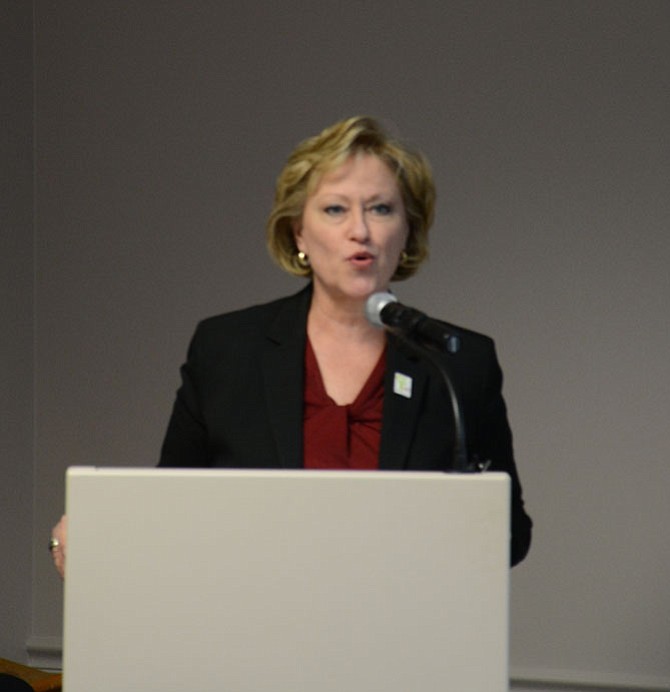 Fairfax County Public Schools Superintendent Karen Garza speaks Nov. 25 at a joint meeting of the FCPS School Board and Board of Supervisors. Photo by Tim Peterson.

Days before the traditional loosening of belts for Thanksgiving, Fairfax County officials discussed the need for tightening theirs.

The Board of Supervisors and School Board met jointly Nov. 25 to talk about budget forecasts, prior to Gov. Terry McAuliffe’s (D) state budget proposal expected in mid-December.

County Executive Ed Long delivered the estimate of a just over $100 million shortfall for fiscal year 2016. That’s versus the estimate in the FY2015 adopted budget of around $37 million.

Long cited lingering effects of the recession, including slow job growth at 0.4 percent in Northern Virginia versus 2.4 percent before the downturn, as well as 10.8 percent drop year-to-date in home sales. Federal procurement spending has been trending down, and Long is expecting a 3-4 percent decline for FY 2014.

Even with a projected $84 million in new funds from revenues, it doesn’t cover the expected increases in disbursements of about $185 million over the previous year. Those include county employee pay increases and benefits, public safety and human services, and for schools a 3 percent operating increase, capital support, debt service and Full-Day Mondays support.

“There are a lot of challenges going forward to the spring,” Long said. “Uncertainty remains in the economy, we don’t know what’s going to happen with the Sequester.”

Since FY2009, the county has cut around $269 million by cutting positions and programs, but it just isn’t keeping up.

“Looking back, there’s nothing easy left to cut,” said Long. “We’re down to the meat of county programs. Cuts are going to be hard, there’s no two ways about it.”

Board of Supervisors Chairman Sharon Bulova commented that additional county reserve funds shouldn’t be looked to as a resource to cover the shortfall.

“Our reserves are too low for comfort,” Bulova said, “and compared to other jurisdictions, we’re dangerously low.”

FCPS Superintendent Karen Garza followed Long to further explain the challenges facing the vast school system regarded as one of the top in the country.

“Sometimes our challenges get masked by looking at the overall percentage of our size,” said Garza. “Forty-nine schools have 50 percent free or reduced lunch or higher. There are some parts of our county where that population and the needs of our students are certainly growing.”

Garza referenced growths of 2-3,000 students in the system over the last several years, as well as jumps in the percentage of students who take English for Speakers of Other Languages and or are eligible for free or reduced price meals. Total enrollment is now over 186,000 students.

“The real cost of growth exceeds $190 million,” Garza said. “And of the cuts over the last six years, one-quarter were just the last year. There are 2,175 fewer people, but at the same time we grew by 20,000 students. That’s significant for our system.”

Echoing Long, Garza said the cuts are not allowing schools in the county to keep up with needs and in particular for schools, the needs of teachers.

She showed starting teachers’ salaries hovering around the middle of surrounding jurisdictions, above only Loudoun and Manassas Park City for 10 years experience and a master’s degree, and just above Prince George’s Maryland for maximum salary.

Even with $53.1 million in a transfer from the county, Garza is still projecting a $63.9 million deficit for FY2016, something she and the supervisors agree should garner some attention from the state.

“We recognize and believe the state has to do something more to help us,” said Garza.

Lee District Supervisor Jeff McKay weighed in as well. “We’re funding 70.6 percent of the FCPS budget, which is significantly higher than almost everywhere else in the state,” he said. “If we received adequate funding from the state, we wouldn’t be having this conversation. It’s a huge emphasis moving forward. If we’re not looking at the long-term, these issues will continue to compound.”