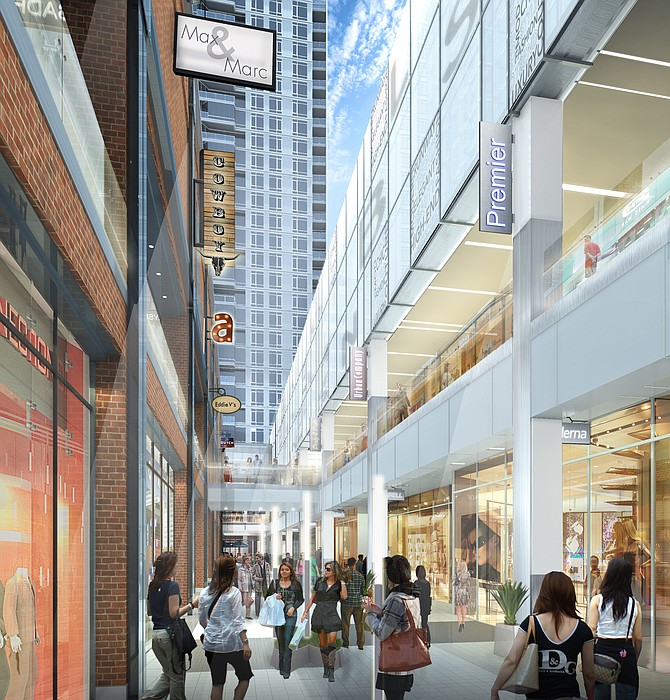 Rendering of the open-air interior of the Ballston Common Mall.

With an average of 20 percent office vacancy across the county, it’s clear that the exodus of federal government jobs has impacted Arlington. Local neighborhoods have struggled with their own losses and have, in turn, found a diverse range of solutions to try and rebound.

Ballston is still recoiling from the 2013 federal government decision to relocate the National Science Foundation from Arlington to Alexandria, taking 2,100 jobs from a region already impacted by Defense Base Closure and Realignment (BRAC). Overall, Arlington has lost 17,000 jobs from BRAC. The American Diabetes Association announced on Jan. 23 that it would relocate its headquarters from Alexandria to Arlington, but with 300 employees it’s not much compensation for the loss of the National Science Foundation.

“This really does nothing for the region, it’s just moving pieces around the chessboard,” said Troy Palma, a regional economist for Arlington Economic Development (AED). “We’re not growing an economy like in Silicon Valley or Austin, which is what we’re working to do. We have to figure out what we can grow here that is unique to this area.”

For much of Arlington, and Ballston in particular, that means doubling down on federal contracting.

“We’re a company town,” said Palma. “We will always be a government town given our location, so we have to understand our true assets here: the federal government. This is a cluster of development that makes sense.”

Ballston’s biggest strength, currently, is the headquarters of the Defense Advanced Research Project Agency (DARPA). While the headquarters itself isn’t that big of a job pool in the area, roughly 200 employees, Palma says it’s a major draw for other technology and contracting agencies in the area.

Palma listed a series of inventions, like GPS, the Internet, and voice recognition software, all developed either by DARPA or contractors working with that agency. Palma lamented that these inventions were being designed in Arlington for military use and then commercialized elsewhere. For Palma, the ideal future for Arlington would be to transition those inventions to the private sector while they were still in Ballston.

Rendering of the nighttime exterior of the Ballston Common Mall

Nearby, the Ballston-MU Metro Station and Ballston Common Mall are both receiving major redesigns. The Metro plans will help increase traffic circulation in the area and make it more pedestrian friendly, particularly on Stuart Street. The Metro will also have a new bus shelter installed across Fairfax Street from the station with the street vendors relocated to the canopy near the shelter. The area will also receive a major upgrade in terms of bicycle parking. Work on the metro redesign is expected to start in 2016. Tina Leone, the CEO of Ballston BID (Business Improvement District), warned that while the metro improvements were promising, it was also a temporary solution to the transportation problems in the area.

“It’s going to help things for about four or five years, and then we might see this problem come around again,” said Leone. “It might be time to look into a new bus station in Ballston, there needs to be some ideas flowing on that.”

According to Leone, the plans for the Ballston Common Mall will turn the building “inside out.” The plans open the storefronts up to the street.

“This mall can really serve the people that live and work here,” said Leone. “They’re not looking to compete with Tyson’s and Pentagon City, it can support the market here as a new town center. There’s going to be a plaza area at the entrance by Wilson, so we’ll be able to program that with events and activities. It’s a great opportunity to bring some culture.”

Leone says the mall can help as a local economy generator, but said the future of Ballston is still in defense research organizations, adding that incorporating local education centers into that network was an opportunity to reinvigorate that market.

“Education is a huge growth area here,” said Leone. “George Mason, Marymount, George Washington and Virginia Tech are all around Arlington and there is amazing potential for those universities to come together and create a Mecca for the disciplines connected to those organizations. There is a growth area in cyber security and health technologies, and there’s an opportunity to expand their presence here.”

Like Ballston, Crystal City was a traditionally contracting-driven economy impacted heavily by BRAC shifts. Where Ballston’s office vacancy is 19.5 percent, higher than the national average of 16.8 percent but average for Arlington, Crystal City’s office vacancy rate sits at 25 percent. Also like Ballston, while the area is looking for a new identity and new economic development, the core of the economy is still government contracting.

“As much as we want to diversify, we need to make sure that our core tenants are happy tenants,” said Palma. “Boeing just opened up their headquarters here. Lockheed Martin is still one of our largest employers in Crystal City.”

Angela Fox, the CEO of the Crystal City BID, said that in the wake of BRAC, Crystal City is trying to find its culture and identity without the same level of contracting that has defined the neighborhood.

“Obviously, in the beginning, Crystal City was very much a government enclave, and it is always going to have an element of the Department of Defense,” said Fox. “In the last few years, though, you’re seeing a little bit of a shift with the Patent and Trademark Office moving out [ in 2005], or BRAC, and when those move out it has a huge impact on the neighborhood. Getting a little bit better balance becomes an issue. Now the focus has been a shift towards younger, innovative companies. That’s a very natural progression.”

The changing demographics of the neighborhood is apparent, even on a street level, acording to Ellen Kaplan, a manager at Jose Andres in Crystal City.

“It’s slowly changing around here,” said Kaplan. “In the past year, we now have the Disruption Corporation and tech companies moving in. There’s going to be new and more jobs. People are going to want to move in, and they will probably be a younger set. We’re moving away from the reputation of a commuter area, but it’s slow.”

Crystal City isn’t the only part of Arlington struggling to overcome a reputation as a lifeless, commuter-driven neighborhood. Palma classified Rosslyn as a car-oriented district built in the architectural dark age of the 1970s. But Rosslyn, not traditionally known for a lively culture or nightlife, is anticipating a small renaissance with the opening of the Corporate Executive Board Towers in 2017 and 2018. The residential tower, expected to open in 2017, will add 377 homes and 45,000 square feet of retail space across the street from the Rosslyn Metro station. According to Palma, the residential developments in Arlington are targeting higher than average incomes, which he says should help spur development in the area. 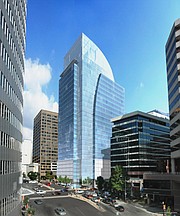 Rendering of the CEB Towers

The business tower, Central Place, will be opening New Year’s Day in 2018 and will add 800 new jobs to the company’s existing 1,200 strong workforce in Arlington. One of the most notable features of the business tower is the public observation deck at the top of the 390-foot tall structure.

“With Central Place coming online, that’s going to bring the only public observation deck with a 360-degree view of the entire region,” said Mary-Claire Burick, president of the Rosslyn BID. “We’re really going to become a tourist destination. There are already several monuments and tourist type things to do here, but that deck will significantly change the tourism industry here.”

“Virginia State Bar recently made a modification to their rule,” said Burick. “There’s a much more open policy on reciprocity. We’re hoping that is going to make Arlington and Rosslyn a really attractive place for law firms in D.C. that are looking for somewhere else to go. If you’ve ever been up in our building, it has the most amazing view of the monuments in D.C. For law firms looking for prestige and that ‘wow’ factor, Rosslyn is the only place for that.”

While the Silver Line is making areas further away from D.C. more competitive, Palma says developments at Tyson’s Mall and more remote areas that are becoming metro accessible won’t keep Arlington from rebounding.

“We’re 40 years into creating infrastructure,” said Palma. “You can talk about all these different things, location and price, but what we hear from all of our prospective tenants is that it’s about workforce. ‘What will my workforce want?’ And that’s what we have.”

The original story claimed that Arlington had lost 17 million jobs to BRAC. This has been corrected to 17,000