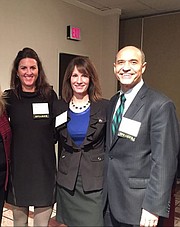 Things may be starting to look up for Arlington. Last quarter, office vacancy declined by 1.5 percent, the first time it has declined in four years. However, with a 20 percent vacancy rate throughout Arlington and the looming departure of the National Science Foundation and the Transportation Security Administration to Alexandria, Arlington’s Director of Economic Development Victor Hoskins said it’s probably a good idea to sit down and talk to the real estate professionals. That’s exactly what happened at the CREW NoVa Arlington County Development lunch on Nov. 10.

Speaking on behalf of the county, Hoskins said that the future for the area rests primarily in technology development — in particular: cyber security, education tech, and medical tech. Hoskins said the county is working on attracting technology firms from Brazil and China as part of an effort to expand its economic base. The newest corporations to find a home in Arlington are Lidl and 1776, who both announced their move to Arlington in 2015. Hoskins also teased that Arlington agreed to a deal last week for 50,000 square feet of office space in Ballston, but would not specify yet which company would be moving in. But Hoskins also said that part of drawing business into Arlington is maintaining a presence at tech and corporate conferences, like South by Southwest.

“In terms of these industries, people we talk to go ‘Arlington, Texas?’” said Hoskins. “That’s how bad our brand is at some of these conferences.”

One of the developers at the meeting was Kelly Shooshan, chief operating officer and director of residential development for The Shooshan Company. Currently, the Shooshan Company has two buildings seeking leases: The View at 4000 Wilson Boulevard and office space at 4040 Wilson Boulevard. The View contains 257 luxury apartments while 4040 Wilson Blvd is 415,000 square feet of office space.

“These are huge projects,” said Shooshan, “we’re continuing to work with the county to get this accomplished.”

One of the company’s projects currently in the works is a redevelopment of campus space at Marymount University, which started with the demolition of the Blue Goose building in Ballston. Shooshan said the company’s vision is to turn it into a more visibly urban and modern site, notably with many of the rooms and stairwells openly visible from the street to give the surrounding area more of a campus feel.

On the Shooshan Company horizons is the redevelopment of Clarendon West, also known as Red Top Cab Properties.

One of the areas that’s been particularly hard hit by the cycles, though, is Rosslyn. While the rest of Arlington begins to show signs of improvement, Rosslyn still suffers a 28 percent office vacancy rate, one of the highest in the region.

Mary-Claire Burick, president of the Rosslyn BID, says she’s familiar with the old image of Rosslyn.

“Government enclave? Military contractors? Closed at five?” Said Burick. “These are all outdated. We’re moving away from an office sector to a more mixed use community.”

Among the developer buzzwords, though, is the image of a neighborhood struggling for a new identity and a sense of economic viability. Burick notes that there are aspects to Rosslyn that many other areas of Northern Virginia still can’t compete with.

“Rosslyn is accessible, that’s really our selling point,” said Burick. Noting that three metro lines run through the area and the Key Bridge provides direct access to Georgetown. That transportation can be a double edged sword though, as Burick noted among her list of reforms the Rosslyn BID has put in place as slowing car traffic through the area to keep Rosslyn from becoming “a highway into Georgetown.” On the topic of Georgetown, Burick did made a quick mention of the ambitions for a gondola between Georgetown and Rosslyn. Hoskins said the county is currently looking into a feasibility study on the topic. In general, Burick said one of the BID’s focuses in the near future is on securing greater access to the Potomac, potentially with a small marina of some type.

Burick emphasized that Rosslyn needs to draw in a millennial population if it hopes to recover from the economic downturn. So what do millennials need? According to Burick, it’s a walkable downtown district with a sense of urban culture. Food trucks are a plus.

Burick highlighted Central Place, planned site of the CEB Inc. headquarters. The building will include a public plaza at the base and an observation deck with a 360-degree view of the county and across the Potomac. The site was at the center of a conflict earlier this year when local residents said the new height cap allowed the Rosslyn skyscrapers to dwarf the surrounding residences. Some of those questions resurfaced at the event with questions on how sustainable a millennial focus will be once those residents begin to age in place. Burick said the BID is aiming for a range of housing options to make Rosslyn accessible to residents of all ages.

But affordability is one of the categories that doesn’t seem to fit on that range.

“Affordable housing is difficult to achieve in Rosslyn with the price point we have there,” said Burick. “We continue to work with Arlington County on affordability in new developments.”

For affordability in Rosslyn, Hoskins referred to the county’s Affordable Housing Master Plan passed in September. However, the Affordable Housing Master Plan only makes mention of affordable housing in the Ballston-Rosslyn corridor at large and defers to the Rosslyn Sector Plan. The sector plan says that maintaining housing affordability in Rosslyn is an important goal of the plan, but also notes that this may not be possible in certain situations.

“Market rate housing that gets built in the Rosslyn Coordinated Redevelopment District (RCRD) is expensive due to high land and construction costs that are consistent with the demand for Rosslyn’s location and the premium views,” says the master plan. “While future development in Rosslyn should contribute to increasing the inventory of affordable housing units in Arlington, there may be advantages to leveraging affordable housing contributions within the RCRD to preserve existing [market rate affordable units] or create new [committed affordable units] in Rosslyn but outside of the RCRD.”