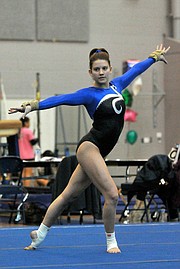 As Rachel Barborek waited to start her floor routine during Saturday’s Barbara Reinwald Invitational, the Fairfax senior looked around at the gymnasts and spectators inside the Washington-Lee High School gymnasium and realized most of them were looking right back.

“Today on floor, in one corner I could see everyone was staring at me,” Barborek said. “I was like, that’s cool, I guess. It doesn’t bother me, especially not on floor, because I like to perform.”

Barborek put on a show, earning a score of 9.3 and causing onlookers to say things such as “she’s so good” and “she’s fun to watch.” Barborek’s performance on floor helped her overcome a sub-bar performance on beam and eventually capture first place in the all-around on Jan. 24.

“It really was not my best at all,” Barborek said about her overall performance. “I started with two falls on beam and I really thought that Sophie was going to beat me. It was a nail-biter at the end.”

The ultra-competitive Conference 6 championship meet is scheduled for Monday, Feb. 2 at McLean High School. Barborek is the defending conference all-around champion. She finished second at the 2014 6A North region meet, earning a trip to states.

McLean senior Lizzy Brown-Kaiser, who finished conference runner-up last year, Washington-Lee’s Sophie Hatcher and Annie Hatcher, and Yorktown’s Mitrovich could also be in the running for the conference all-around title.

Hayfield’s Overstreet, a junior, captured a three-way share of the AAA vault state championship as a freshman and won the 6A bars state title as a sophomore with a state-record score of 9.925, but has battled a back injury this year. She finished third on bars (8.85) and floor (9.05)Saturday.,

The team competition will likely come down to Washington-Lee, the three-time defending region champion, McLean, last year’s conference champion and region and state runner-up, and Yorktown. Only the top two teams advance to regionals.

“Our conference is the hardest by far because McLean and W-L” have been the top two teams in the region each of the last three years, Yorktown head coach Joanne Price said. “Going up against them in an entry-level meet is a hard position to be in. They’re both excellent teams.”

The 6A North region meet is scheduled for Feb. 11 at Lake Braddock Secondary School.