ACCT Stages ‘Cheaper by the Dozen’

Comedy tells of efficiency expert who raises a family with 12 children. 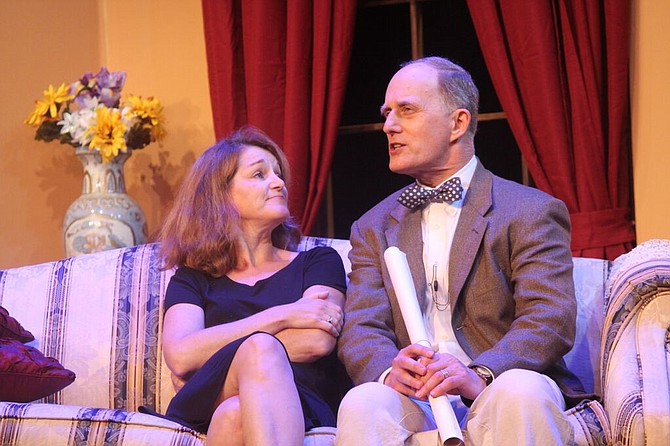 Director Becky Patton wanted to direct "Cheaper by the Dozen" because it was one of her favorite books. "Today, the thought of raising a dozen children makes me want to run screaming in the other direction; however, directing this wonderful group of actors has been an enormous amount of fun," she said.

She said Gilbreth Sr. was a time and motion study expert; his wife Lillian was one of the very first industrial psychologists. And together their work paved the way for the modern study of ergonomics. And their household management bears a striking resemblance to that of Capt. Von Trapp at the beginning of "The Sound of Music," with its whistled assemblies, inspections and reports. "The push to become 'the most efficient family in America' has its price, but is not without plenty of humor," she said.

She said the cast has a variety of acting experience (or none, in several cases), and she wanted to help the newcomers enjoy their first experience while not boring the old hands. Part of their enthusiasm has stemmed from the research the actors have done on their individual characters, since this is basically a true story. "We also spent time talking about how families interact and really enjoyed the dynamics," she said. " I had each one create a back story for their character — what they liked, who their ally was in the family, what their favorite subject was," she added.

"I would be remiss if I didn't point out to you that this show is only possible through the hard work and dedication of many people, in addition to the actors ... Set builders, painters, and decorators, sound, lighting and properties designers, stage managers, costumers, the ticket booth and concessionaires, and of course, my fabulous producers who kept everyone connected and the show moving forward," she said. "I want to give the marvelous technical crew a shout out for making 'Cheaper' the endearing production it is today."

James McDaniel plays the role of the father, a historical figure who lived from 1868 to 1924 who had a major influence on scientific management and management in general. "He is a little behind the social fashions and conventions of the day; his value system is still rooted in the previous (Victorian) age, so he is in conflict with the growing independence of his daughters who want to adopt the current fashion and conventions," he said.

He said that a strong theme throughout the show is the father's concern that "time is precious" and that it is running out before he can finish helping his family become self-reliant. "I am still deciding how to emphasize this theme without being maudlin and melodramatic," he said.

He added: "I hope the audience will compare, reflect upon, and cherish relationships with their own family members. It will remind audiences that there will always be conflicts between young and old, but we can still love, respect and support one another."

Brevan Collins plays the role of Larry, a senior in high school who plays fullback for the Montclair High School football team. "He really likes Anne, but is afraid to ask her out at first because her dad is very scary," he said.

It has been a challenge for him to play someone who is five years older, he said. "I don't really know how a 17-year-old acts or thinks because I am 12. I have been using my script and watching how the older teens act," he said.

Alyssa Denton plays the role of Anne, the oldest child in the Gilbreth family who wants to fit in — whether that be with clothing, the way she carries herself or wanting to impress boys. "She faces troubles when her family prevents her from doing as she wishes and to focus solely on schoolwork and skipping grades," she said.

She said she was challenged in finding some of the underlying motivation with Anne's actions. "While on the surface they can appear very shallow, I wanted to find the deeper meaning to her wanting a boyfriend," she said.

She hopes audiences leave the production hugging their loved ones; adding that when looking at the production as a whole, it's a really touching story.

Zack Collison plays the role of Bill, a typical younger brother who enjoys bothering his older siblings but likes to cover it up in front of their dad. "At one point in the show I have to chaperone my oldest sister on a date which makes me more disturbing to her than the others," he said.

He said some of his challenges were how to say his lines convincingly, depending on the notation of voice, and finding what he could do on stage to physically interact with his family.

He hopes the audience will see how real life was for the Gilbreth family — and discover what life meant for them each as an individual and together as a family.

Suzanne Martin plays the role of the mother, Lillian Gilbreth. "Lillian Gilbreth was a brilliant women with educational credits that would be impressive even in our times," she said.

She has been reading Lillian's autobiography, and she said the play takes some liberties with many of the life events in the Gilbreth family. "I have found I needed to take a step back and look at the messages the play would like to deliver, and step a bit further from the events and Lillian's true reactions to them," she said.

She hopes people will walk away with a realization that life is precious, and that we need to value each day we are given. "I hope audience members go home and call/write/see their loved ones and tell them how special they are to them," she said.

Lyndsey Lawrence plays the role of Lillian, the second-youngest daughter in a 12-child family. At age 11, she hasn't found herself at the center of boy-craziness like the rest of her sisters. "Her disinterest in boys and interest in other childlike things prevents her from bonding with her sisters, but brings her closer to the younger kids in the family," she said.

She said a challenge was having to portray herself much younger than she is, and being very energetic and bubbly every second she was on stage. "This was a change for me since I'm usually cast in roles with the character being much older or having a meaner personality," she said.

Olivia Hays plays the role of Martha, the third oldest child in the Gilbreth family. "She, like her older sisters, has her focus set on attracting boys and wanting to fit in," she said. "Martha always means well, but sometimes her judgment is clouded."

Her challenge in working on the piece, she said, was that Martha was trying to be older, but she is still a little immature and impulsive. "My challenge in developing her character, was balancing my delivery of lines so that her immaturity doesn't come off as lack of intelligence," she said.

She added: "Every family has its quirks, and the Gilbreth family is no exception. Though the Gilbreth family is a little wacky, especially with the father's emphasis on efficiency in the home, its members value their time together. My hope is that the audience members enjoy the Gilbreths, and are reminded, even if just in a small way, what makes their families special. Then they may value the time they have (or had) with their families a little more."

Producer Leah Hays said "Cheaper by the Dozen" is a timeless story that appeals to all ages and offers a wonderful opportunity for young actors to experience the stage with adults. She said integrating children into the theater production is important because young actors can learn so much by being around the more experienced actors. In fact, her whole family is involved in this production: her husband John (Dr. Burton), daughter Olivia (Martha) and son Johnie (Dan.)

She added: "Each time the cast rehearses, the father's response to Anne's question in Act III gives me pause, "... It's for where your heart lies — that's what you save time for." She said she hopes the audience pauses and ponders, 'Where does my heart lie?' "It's prudent to get that figured out because time is always passing," she said. The message was very real for her in seeing her family onstage. "In the blink of an eye, my Kindergartener blossomed into a young lady heading for high school, and my baby boy that loved to be held, now races across the ice in hockey gear," she said.