As city approves details for the mall redesign, other questions remain unanswered. 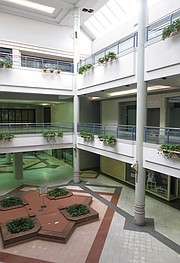 “Residents want to know when groundbreaking is going to happen,” said Matthew Warner, a nearby resident. “If we don’t get the sense that there is a groundbreaking date, no one is really going to believe that it’s happening.”

For city staff, after years of planning and negotiations, the process is mostly out of their hands. On June 13, City Council approved a final set of special use permits for the site that would increase retail and residential floor space as well as allow a large, outdoor projection to play cartoons and the possibility of a seasonal ice skating rink.

“With this last approval, this is it in terms of what they would need [to get started],” said Karl Moritz, the director of Planning and Zoning. “They may get a retailer or something that requires a tweak to what’s been approved, but they have all the regulatory approvals that they need from the council. We work on what we call the final site plan but that’s very close to being finished.”

Moritz said the final site plan will be completed by the end of summer and brought back to City Council after the council’s summer recess.

Currently, Landmark Mall faces 40 percent vacancy rates. Current plans involve demolishing the existing mall, built in 1965, and re-establishing the center as an open access, outdoor retail center. Some in the public and city government have expressed concerns about delays in the project.

“We need to get this project moving,” said Mayor William Euille. “It should have been done and built and ready 10 years ago, so let’s keep that in mind.”

However, exactly what retail will be installed in the facility and any timeline for the project remains to be seen. Staff from the Alexandria Economic Development Partnership (AEDP) recently attended conferences at RECON, the world’s largest trade show held annually in Las Vegas, and a South by Southwest conference focusing on innovative startup companies.

“We cannot divulge the tenants at this time,” said AEDP President and CEO Stephanie Landrum. “The meetings are in a preliminary phase. Typically what happens is announcements are made after leases are signed. As leases are firmed up, they will make announcements.”

According to Landrum, the importance of attending these types of events is in establishing relationships with the businesses and educating them on opportunities in Alexandria. Since the conference, Landrum noted that the AEDP has been in contact with more than 750 businesses, though the majority of these are not Landmark Mall specific. However, Landrum did say that the AEDP is currently meeting with potential tenants for Landmark Mall.

According to Landrum, establishing the tenants also must be completed before designs can be made on the layout of the building spaces.

“It’s a puzzle,” said Landrum. “One user could come in and need 10,000 square feet, but that could also be broken into five smaller storefronts. People [in this industry] are using the word curation: it’s about finding the right matches for the project.”

Landmark Mall is currently divided between three owners: Macy’s on one side, Sears on the other, with the Howard Hughes Corporation controlling the middle.

“This project remains an important priority for us,” said Caryn Kboudi, vice president of the Howard Hughes Corporation. “We continue to make great progress on the development front and we continue to look at a lot of different leasing opportunities to make sure we create a wonderful, curated experience.”

Kboudi said the Howard Hughes Corporation is intending to craft the new Landmark Mall more towards a culinary and entertainment experience. However, like Landru, Kboudi was vague with regards to future timeline and potential tenants in the new mall.

“There is no timeline at this point,” said Kboudi. “This is something we hope to be able to share at some point in the future, but we have to hit certain leasing milestones first.”

While expressing support for the AEDP’s work at RECON and South by Southwest, Kboudi also would not speak with regard to specifics and would not comment on the involvement of Macy’s or Sears in the project.

“I don’t know that we have a precise groundbreaking date at this point,” said Jonathan Rock, an attorney for Howard Hughes. “Our goal, if you can call it that, is for the first quarter of 2016, but obviously there are things that need to get done, including approval of the final site plan.”