Bacon and Bureaucracy in Alexandria
Votes

Bacon and Bureaucracy in Alexandria 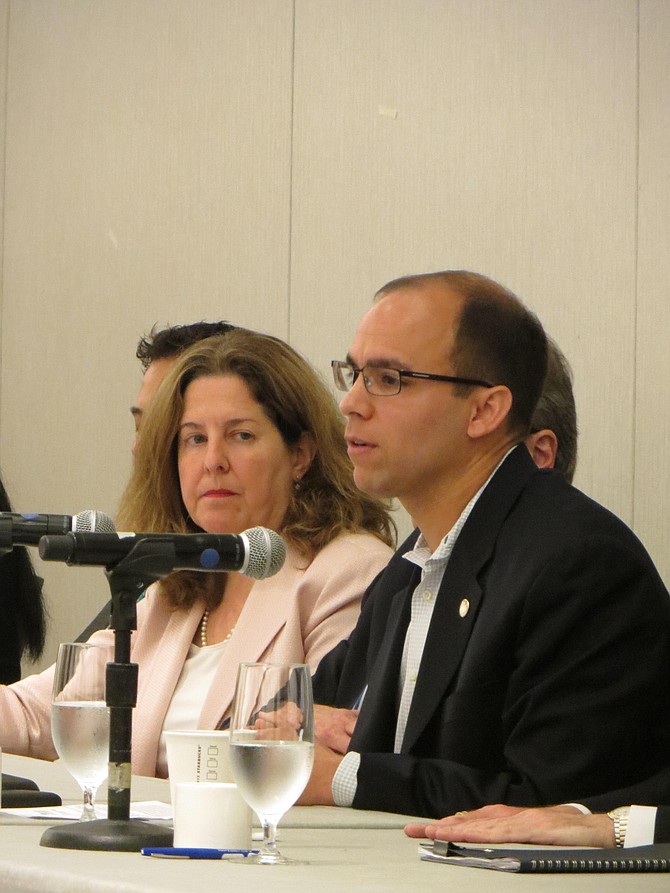 For the first time in the legislative session, Alexandria is getting a little help from Richmond. A bill from the General Assembly that would have required the city to complete its sewage system reforms by 2027 could be eased to 2030 if Gov. Terry McAuliffe’s amendment is approved.

Alexandria has a combined sewer system, so household and business sewage fills the same tanks as rainwater, which flush into the river when they overflow. Because of this, 70 million gallons of raw sewage is estimated to be dumped into the Potomac River by Alexandria each year.

The demand from the state had been a major driving cost in the proposed FY2018 budget and a topic of discussion at every City Council event. At a legislative breakfast hosted by the Chamber of Commerce on March 27, the sewage system was the first question posed to council members and the legislative representatives.

“We were able to negotiate to a less-bad version of the bill,” said state Sen. Adam Ebbin. “We were able to extend the deadline to just ‘nearly impossible’: five years … I don’t recall a single locality being targeted this way.”

The legislators all said the bill was more about targeting Alexandria than environmental reforms.

Mayor Allison Silberberg expressed her gratitude to McAuliffe for advocating what the city sees as a more reasonable timeline for sewer system development. Silberberg, describing herself as a lifelong environmentalist, said she agreed that tackling all of the sewer outfalls was the right thing to do and hopes that a longer timeline can help the city accomplish these goals with minimal impact on local residents.

“This issue has been festering,” said Silberberg. “The combined sewer dates back to the early 1800s. We are fully committed to getting this done and we will do everything we can to mitigate the impact on citizens. It’s the right thing to do and we’ll be stronger for it in the end.”

Sewage wasn’t the only controversy mucking around in Old Town. Another major topic of discussion at a more local level was the proposed Business Improvement District (BID). The proposal would charge an additional tax to businesses along King Street and a few adjacent streets in order to create a BID, an organization that helps beautify, advertise, and improve public spaces along King Street. Many on the City Council were supportive of the idea.

“I like that it gives us an entity we can work with and fill in the gap of what the city can’t provide,” said City Councilwoman Redella “Del” Pepper. “It has a great deal to offer in terms of setting an identity as a business community with the best restaurants around. All of that is really important. It gives us a chance for a solid identity and I think it’s great.”

For Councilman John Chapman, the biggest advantage of a business improvement district is bringing visitors from the main street to the side-streets.

“If you’re on King Street, people walk by, but off of King [they don’t get that foot traffic],” said Chapman. “The opportunity for additional marketing won’t come from city government.”

Chapman referred to Crystal City, where a BID came in and helped redevelop the area as one friendly to smaller businesses and restaurants.

The holdout among the council representatives was Silberberg.

“I think this is something the city should be handling,” said Silberberg. “I want to hear from more businesses. The Alexandria Economic Development Partnership and Visit Alexandria should already focus on what the BIDs do in other cities. I want to see it more fleshed out.”

Looking outside of Old Town, the council addressed another long-running challenge for the city: Landmark Mall. On Jan. 9, the Howard Hughes Corporation acquired the 11.4 acre Macy’s store and parking lot, giving it control over two-thirds of the site. Pepper, who had been one of the most prominent voices about transforming the mall, said all of the paperwork and policy on the city side is put into place and Howard Hughes is starting redevelopment plans for the site to turn it into an open-air commercial hub.

“The ball is in their court now,” said Pepper. “The West End will rise again.”

Councilman Paul Smedberg noted that city plans were in place for more than just Landmark Mall, but reforming that site will help bring a real center and create a uniform sense of place for the surrounding area. But while things are looking up for Landmark Mall and the city pursues new development around the planned Potomac Yard Metro station, Chapman said he’s been disappointed at the limited development in the Eisenhower Metro area. With the National Science Foundation moving in across the street and the Metro station on one of the most active Metro lines, Chapman said it was inexcusable to see huge amounts of empty land near the Eisenhower Metro station.

“[Eisenhower and Van Dorn] are two of the most underutilized stations in the whole system,” said Chapman. “These should be the low hanging fruit. Why haven’t we done anything with them? That is inexcusable to me.”

The state legislature will reconvene on April 5 to either accept the amendments or reject them, after which McAuliffe could still veto the remaining bills.