A House by the Sea
Votes

A House by the Sea 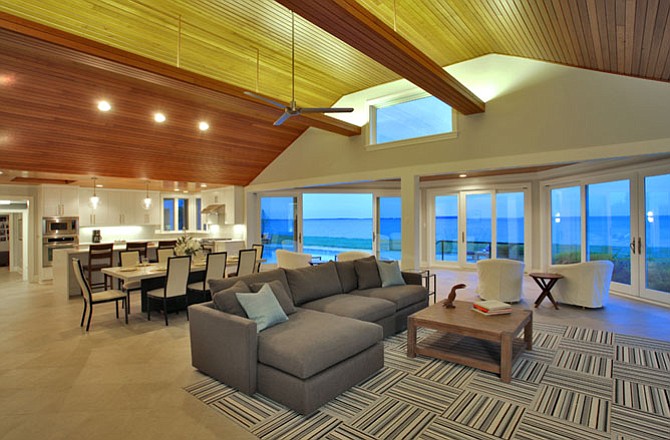 This Chesapeake Bay vacation home with renovations by Doug Roberts and Jessica Parker Wachtel of GTM Architects has an abundance of windows that allow in sunlight and offer views of the water. Photo courtesy of GTM Architects

As the sweaty days of summer slog on, many are dreaming about a home by the sea, a wistful retreat where cares flow as freely as an ocean breeze. A few local designers share seaside secrets for an idyllic hideaway. 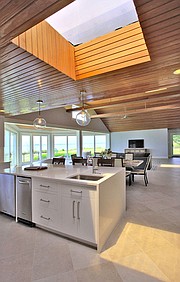 This home, which sits on the Chesapeake Bay, has an open floor plan that includes a kitchen that flows into the family room. Doug Roberts and Jessica Parker Wachtel of GTM Architects designed the home’s addition.

When a Bethesda, Md., family decided to update and expand their vacation home on the shores of the Chesapeake Bay, functionality and style were top priorities.

Doug Roberts and Jessica Parker Wachtel of GTM Architects in Bethesda added more than 1,400 square feet, but kept many of the existing features of the 3,792-square-foot beach house, which was built in 1985.

“What was unique about this project is that the family’s father had originally designed this home himself,” said Roberts. “It’s modern with lots of glass and cathedral ceilings. The family didn’t want to change that. They just wanted to expand it.”

The home now has an open floor plan, including a kitchen that flows into the family room, an exercise and recreation room, glass garage doors, an outdoor shower and a wet bar. The windowsills are lower, allowing in more light and expanded water views. The home’s bathrooms and five bedrooms were updated, adding a balcony with views of the bay to a rear bedroom.

“The work was all consistently done, so you really can’t tell that there was an addition,” said Roberts. “We replaced all of the materials — flooring, tile, trim — and put down new materials throughout.”

AN ALEXANDRIA COUPLE wanted their second home on the Eastern Shore to exude a calm serenity. They achieved that feel with white walls and furniture at the recommendation of interior designer Grace Nelson of Nelson Design Lab in Arlington.

“White exudes peace and quiet,” said Nelson. “They wanted their beach house to be the opposite of the chaos of Washington, but they didn’t want it to be too far removed modernity. They still wanted their luxuries.”

Among those amenities are a kitchen equipped with a Bosch dishwasher and a built-in Subzero refrigerator. The kitchen’s white cabinetry is accented with natural pine knobs and pulls that match the pine flooring. 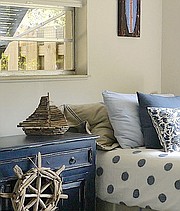 A bay window in the living room allows for majestic ocean views. That seascape can also be enjoyed from the clawfoot soaking tub in the master bathroom.

WHEN THE OWNER of a Rehoboth Beach, Del., condominium decided to rent her property to beach goers, she wanted to marry casual elegance and durability.

“When you’re designing a beach property that is also used as a rental, you want to find something that is durable and can be cleaned easy and can stand up to the sand,” said Kjos. “You don’t over accessorize a beach property, especially if it’s a rental.”

They created an office space “because a lot of people have to work even when they’re on vacation,” said Kjos.

A chandelier made of natural capiz shells, with an easy-to-clean lacquered finish, hangs over the wooden dining room table. The result is a beach feel, but with a modern twist, says Kjos.

“We tried to get away from the stereotypical beach décor with motifs like seagulls and driftwood,” she said. “We wanted to use water-like colors because it makes for a relaxing environment, but we mixed the city with the ocean and created a flow throughout the house so that it connected visually.”

Doug Roberts and Jessica Parker Wachtel of GTM Architects added a balcony with views of the bay to a rear bedroom of this Chesapeake Bay vacation home.

IT’S THAT CONNECTION, to the sand, the surf, and surroundings that makes a vacation house feel like a home. When Potomac, Md., architect James Rill went looking for a Vero Beach, Fla., vacation home, he was inspired by his favorite sport: baseball. “It’s very close to the Nationals spring training center,” he said.

“It was a dump when we got it,” he said. “When my wife first saw it, she was ready to kill me, but we stripped it to the bone and cleaned it up.”

When designing the space, Rill wanted to make sure the materials he and his wife chose could stand up to the sand and surf environment of south Florida. The couple wanted the single-level dwelling to have a look that was simple and clean. They chose dark red tile flooring and sea-inspired furnishings in blue and white.

“It has a subtle elegance,” he said. “It doesn't call attention to itself.”

The new kitchen opens up to the family room and is devoid of large appliances, which Rill says are unnecessary in homes such as his.

The home accommodates Rill’s parents, also baseball fans who make the trek to spring training camps. “We took the master suite and we made it into a nicer, handicapped accessible space.”