White Kitchens Are a Trend with staying Power
Votes

White Kitchens Are a Trend with staying Power 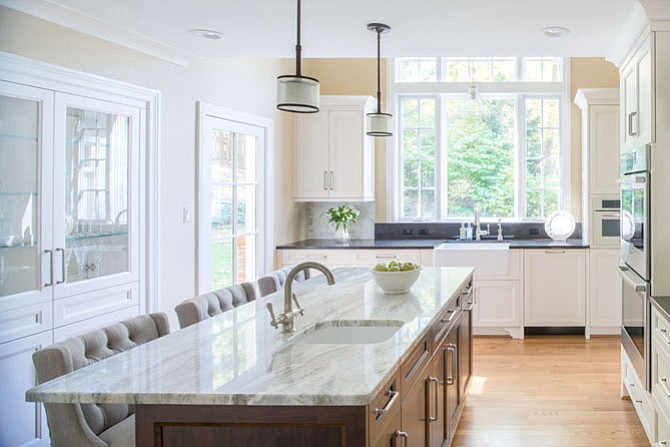 A large picture window is the focal point of this white kitchen by Anthony Wilder Design Build Inc. Photo by John Cole 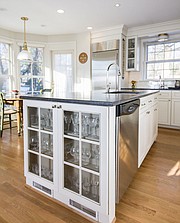 In this kitchen, designed by Wentworth, Inc. a cabinet with mullioned glass doors face the dining room. 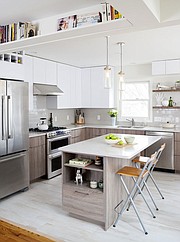 A Potomac, Maryland, kitchen was lightened, brightened and redesigned by Rill Architects to give the home’s owners to a connection to their natural surroundings.

The clean, crisp look of a white kitchen has staying power and versatility, according to the National Kitchen and Bath Association. The organization reports that white cabinetry is the top choice for 67 percent of its members. In fact, the percentage of homeowners requesting white kitchens has increased by 20 percent over the past two years.

The trend is also apparent locally, said designers. When a family of five returned to the Washington, D.C. area after spending 30 years in the U.S. Foreign Service, they settled into their home in Bethesda, a 1960 brick Dutch colonial that they purchased in 1986. They decided to give the home a makeover because, after being a rental for many years, it felt dated and dingy. The family felt that the kitchen was old, dark and closed-off from the living room. They needed a larger space to accommodate their family of five.

The homeowners knew they wanted the new kitchen space to be free flowing and light-filled. They also wanted to incorporate some of their existing furniture, such as an antique table and chairs.

Designed by Bruce Wentworth of Wentworth Inc., the new kitchen is sunny and spacious. It includes white cabinetry and an island with dark gray granite countertops. A large stainless sink, dishwasher, pull-out trash and bookcase for cookbooks make the island functional. Facing the dining room is a shallow cabinet with mullioned glass doors.

When the owners of an Arlington home decided to update their dark and dated kitchen, they opened the space to the living and dining rooms and added natural lighting and white cabinetry. The result was a room with a crisp and airy aesthetic. The new, open concept allows the homeowners to better interact with family and friends.

“Prior to the remodel, the kitchen was essentially closed off to the rest of the home,” said April Case Underwood of Case Design/Remodeling. “I think the grouping of materials the client selected with us are unique, definitely not cookie-cutter, and these make the space really interesting,” Underwood said.

Among the fixtures, accessories and materials used are Caesarstone countertops, a marble and granite backsplash and reclaimed shelving, provided by homeowners, which, “made the kitchen look more unique and gave it an eclectic feel,” said Underwood.

“I think in general the perfect combination of the various materials, from smooth and glossy to rough and textured, is simple but interesting and shows beautifully,” said Underwood.

A large picture window overlooking an expansive backyard is the focal point of a white kitchen in Falls Church. When the homeowners decided to renovate and expand the space, they enlisted the help of designer Keira St. Claire of Anthony Wilder Design Build, Inc. The project included adding additional space to the back of the house and removing a wall between the kitchen and the dining room.

“Although we opened up the wall between the kitchen and dining room, one challenge was maintaining a distinction between the two spaces, which was important to the client,” said St. Claire. “In order to create a feeling of separation, while preserving the sense of openness … [we designed] a custom glass cabinet piece, which is accessible from both rooms,” said St. Claire.

The new unit gives the homeowners extra storage and a place to display their crystal. Sunlight from the new picture window in the kitchen reflects off the crystal stemware and refracts, causing both rooms to glisten with radiant, natural light.

White cabinetry was contrasted against dark wood as part of a kitchen renovation in Centreville. While the basic layout of the kitchen remained the same, the space, which was designed by Allie Mann of Case Design Build, Inc., was brightened with white cabinetry, a built-in pantry and a custom cherry wood island. “The white kitchen is classic and timeless,” said Mann. “It can work with most color accent palettes.”

“The white kitchen is classic and timeless. It can work with most color accent palettes.”

A cramped and dark Potomac, Maryland, kitchen was lightened, brightened and redesigned to give the home’s owners a connection to their natural surroundings, which included a landscaped yard created for outdoor entertaining.

The kitchen was designed by Jim Rill of Rill Architects who added a working island around which the family can gather and prepare meals. He described the new look as a, “simple clean design with subtle elegance.” “

We added functional space with lots of windows and a place for everything, so kitchen could be cleaned up and used an entertaining area,” Rill said.

The family wanted a white kitchen, he said, because it, “creates a great backdrop for art and accentuates the exterior colors of spring, winter and fall.”