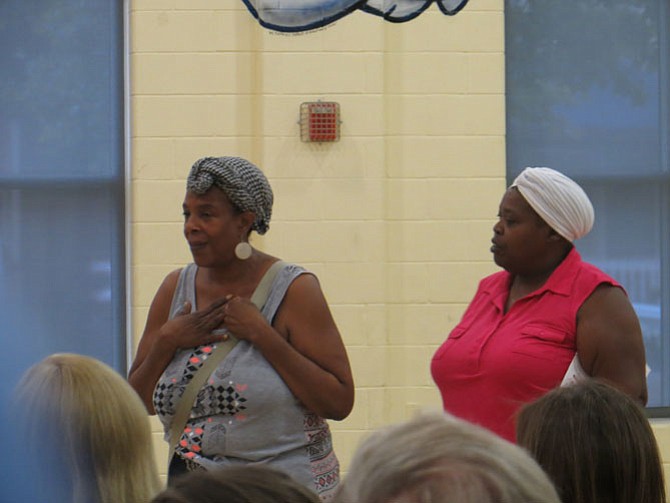 When asked “Who has heard gunshots in the local community?” an overwhelming majority of the audience responded that they had.

Shakkan Elliot-Tibbs had spent July 2 in Alexandria visiting his cousin. Elliot-Tibbs was on his way to the metro to meet his mother in Springfield when he was struck by gunfire. Police arrived at 11:30 p.m. responding to one of the many “shots fired” calls from the neighborhood, but that night found Elliot-Tibbs suffering from a gunshot wound. Elliot-Tibbs was transported to a hospital, but later died of his injuries. Elliot-Tibbs, a 22 year old from Woodbridge, is the first murder victim in Alexandria in 2015.

The police hosted a community meeting on July 6 at the Charles Houston Recreation Center, a little over a block from where Elliot-Tibbs was murdered. The meeting was attended by hundreds of local citizens, including Mayor William Euille. Elliot-Tibbs’ death ignited fears and tensions that many in the Braddock Road neighborhoods say have been bubbling under the surface for months or years. Some in the community said that local fears ran deeper than the murder; that the neighborhood was already on edge as a result of what they perceived as an underwhelming police reaction to the persistent calls of “shots fired.” Others in the Andrew Adkins public housing neighborhood, where the murder took place, believed that their neighbors’ fears were largely driven by racial mistrust.

While Deputy Chief David Huchler asked the audience for assistance in finding Elliot-Tibbs’ murderer, the most powerful testimony came from Elliot-Tibb’s mother. Huchler was initially hesitant to hand the microphone over, but yielded after an overwhelming outcry from the audience.

“It’s easy to say ‘it’s not my child,’” said Linda Tibbs, “but when you close your eyes to the situation, you’re not helping. You’re sending the message to this group of criminals that this is OK.”

Linda Tibbs explained that her son had been preparing to go back to school on July 13 and that her son was an innocent bystander. Huchler had previously stated that the gunfire was largely being exchanged by groups of individuals who were known to each other. But Linda Tibbs’ testimony raised more questions; questions Huchler and the Alexandria Police were unprepared to answer.

“You’re saying there’s a group of individuals [who have been firing at each other] in all of these cases, but the mother is saying that he was an innocent bystander?” asked Hayes Lewis. “Which is it?”

Huchler responded that the police could not reveal the details of the ongoing investigation, which in the middle of a meeting ostensibly held to increase communication between the police and the local community, did not sit well with many in the audience.

Bethany Case, a local resident, asked the audience to raise their hands if they had heard shots fired in their neighborhood. Nearly all of them raised their hands. She asked how many had witnessed a crime or seen a drug deal take place and received a similar response.

“There’s a leadership problem in the Alexandria police,” said Case. “You’re not making this a priority. Where is the police chief?”

Huchler explained that Police Chief Earl Cook was on leave and was travelling out of town, but that Cook had walked through the neighborhoods the week before. Huchler said that, since February, the police have been moving resources into the Braddock neighborhood to address the shots fired calls. Huchler noted that the department was utilizing high visibility tactics and enhancing their community outreach efforts while also working with plain clothes detectives and undercover assets. In relation to the recent rash of shots-fired calls, Huchler said the Alexandria police have made six arrests. However, Police Public Information Officer Crystal Nosal specified after the meeting that the reports of shots fired around the Braddock Metro are “not currently connected’ to the murder of Elliot-Tibbs.

But for other local residents, the fears being expressed had a racial element. Gwen Pratt Miller was particularly upset that the conversation surrounding a dead African American man almost immediately turned to a conversation about drugs.

“We’re still a divided city, it will always be that way,” said Miller. “There is no evidence about who shot the boy, black or white … Every [African American] in Alexandria is not a drug dealer or on drugs.”

“We need to go back to the basics,” said Joyce Rawlings in a plea to the community. “We’re in a city, we’re close to each other, and we see each other every day. How many say hello or good evening? Now how many clutch your bags as you walk by? These people are invisible to you. The first thing you put up between the neighborhoods is a big fence. You are all in crisis mode because someone is coming to take your stuff. Stop being scared. You can throw all kinds of money at the police, but we have to learn how to police ourselves.”

“To say that there’s not a separation based on economic would be hypocritical,” said Guse-Noritake. “There is. [Ms. Rawlings] is right. Fayette is not a big street, but how do you reach across and try to form a community? It’s difficult .… You can’t just walk across the street but it’s what needs to happen. Other places have done it, we want to do it, and we’re trying to make that happen.”

At one point, a police officer lived in the Andrew Adkins neighborhood, and Guse-Noritake said she was happy to hear from the police department that they had an officer who may move into the neighborhood again. In the meantime, Huchler said the police will run some local operations out of a vacant property. Huchler also said that there would be increased community involvement and more communication with the public.

As the meeting ended, local Alexandrian Scott Carter urged the group to join hands in a prayer for more community and understanding. For some, though, it was a hollow gesture.

“We’ve been praying for years,” said Miller. “Look where it’s gotten us.”