Decrease in numbers of homeless on the streets does not mean families are all housed. 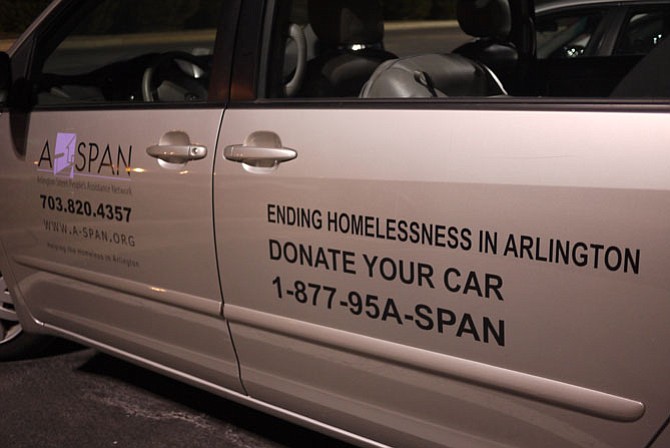 A-span van pulls up to do the Point in Time Count. Photo by Eden Brown/The Connection

Volunteers search for homeless under a bridge in Arlington.

Caroline Jones, of Doorways, an organization which is part of Continuum of Care and specializes in family homelessness, notes the Point in Time Count can be misleading. It’s a snapshot of what is happening on the street on a cold night in January.

While Caroline is careful to applaud the decrease in numbers on the street, she believes the “decrease” has to be seen in a wider context. “The reclassification of some homeless families as ‘housed’ just means those people are not out on the street — that day,” she said.

Housed individuals in the category of “rapidly rehoused” have 100 percent of their rent being paid for by a homeless agency: in three months they could be out on the street again. “If you change the definition, it doesn’t mean you’ve solved the problem.”

Jones is concerned that the rush to say that homelessness in Arlington County has decreased by 18 percent could send the wrong message to the community by declaring the problem nearly resolved when it is not. She cited her own statistics: one shelter for domestic violence victims has 11 beds but 15 people sleeping there. Family homelessness actually went up by 7 percent in Fiscal Year 2014 and did not decrease in FY 2015, she said.

Jones explains “Family Homelessness” is a category of its own. These are families who don’t know where they are going to be in a day or two. They may be housed in a situation where they are living in a one bedroom apartment with 10 other people, or in a home where they can only remain if they provide sexual favors. Jones said: “When families lack safe housing, they don’t live on the streets. Rather they struggle to find any and every place where they can temporarily stay while trying to flee abuse or rebound from extreme hardship. While not all of these families need shelter, we must continue to look at the totality of needs and ensure the services exist to support these adults, youth and children.” They weren’t out on the street in January: but they weren’t sheltered safely either. Most of her clients stem primarily from domestic violence; others have sheltered with friends or family but worn out their welcome. In some cases, her homeless families got caught in the economic downturn and can’t get back on their feet.

The sharp escalation in the cost of housing in Arlington County has played havoc with options for the poor. “Whatever happens in the economy, if you wait five minutes, it will show up in the homeless community,” Jones said.

The challenge, she says, is to quantify it. Five years ago, with the landmark policy change called the Hearth Act, there was a radical change in who could be counted as homeless. This made it easier to quantify homelessness, in terms of “at risk” people on the street, but, Jones said, “There was no one combing through the community for people living in a one-room apartment they would be evicted from the next day. Jones said there are 20 children sleeping on sofas in the Arlington community today: runaway teenagers who change to a different sofa every day. “The 100 homes campaign was great, but it didn’t house a single child or abused woman who has nowhere else to go. Families living in substandard conditions don’t know where they will be in a month. It’s out of the question for their kids to join a soccer team or do any of the normal things kids need to do,” she said.

Jones urges Arlingtonians to lobby for affordable housing in the community and give to the Continuum of Care organizations to help resolve this problem.