Editorial: Trending in the Right Direction 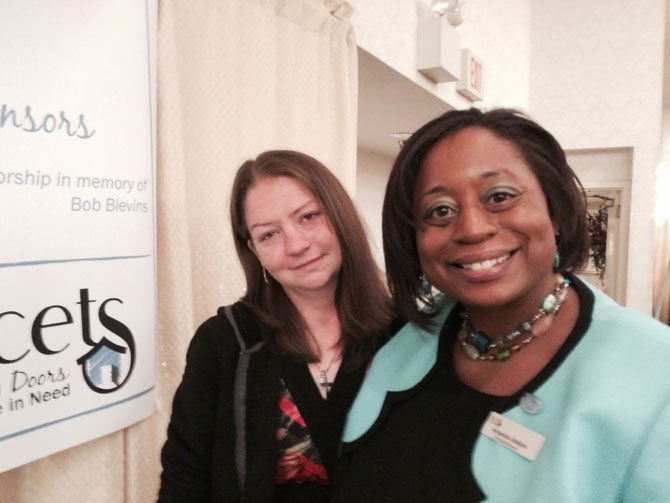 After being homeless for five years, Sandara Perry, left, recently moved into permanent housing with ongoing support provided by FACETS. Perry grew up on Route 1 in Mount Vernon, and was placed in foster care while her mother struggled with addiction. Without support to make the transition from foster care, Perry struggled with alcohol and abusive relationships. She shared her story at the FACETS annual breakfast last Thursday, April 24, and she is pictured here with FACETS Executive Director Amanda Andere. Photo by Mary Kimm.

On one night in late January, local jurisdictions in our area fanned out to count the number of people who were literally homeless. Fairfax County released its numbers last week; Arlington and Alexandria will do so in the near future.

In Fairfax County, the commitment in 2010 to end homelessness in 10 years has resulted in significant progress, even in the wake of the great recession. The number of people literally homeless decreased by a third from 2008 to 2014, from 1,835 to 1,225 counted this year.

Many non-profit organizations have partnered to prevent homelessness one family or individual at a time for those on the brink and to house chronically homeless individuals. There is so much still to be done.

The 2014 point-in-time count of people experiencing homelessness includes people who are described as "literally homeless," those who are in shelters, in time-limited transitional housing programs, or unsheltered and living on the street at one "point in time." It does not count the individual who might be homeless but is sleeping on a friend’s sofa or the family squeezed into an uncle’s "spare" bedroom after being evicted from their own apartment.

Two sentences from the county report are worth repeating, even if they are obvious:

"The results would be even more substantial if additional housing options were available. The reduction in homelessness will not continue at the same pace in the future without significant increases in the availability of affordable housing."

A year ago, the coalition of partners committed to ending homelessness embarked on the local piece of a nationwide effort to provide housing for the chronically homeless people in our community. There were an estimated 150 such individuals, living in the woods and in cars and on the street, in the county, and a year later, FACETS and others met this year’s milestone of bringing 50 such individuals into housing. These are people who need a continuum of services get on their feet.

This misguided attitude on the part of some county leaders ignores the fact that this region cannot be economically vibrant if there is no place affordable to rent even for households who make $50,000, never mind the households that get by on less than half of that.

Two full-time $10 an hour positions yield $40,000 a year. Last year, a family needed an annual income of $56,472 to afford to pay the $1,412 per month rent on the "fair market rate" for a two-bedroom apartment in Fairfax County. Rents have continued to rise.

Many working families living in Fairfax County struggle financially, balancing choices every month between rent, transportation, food, medical costs and other expenses that are not optional.