A portion of the Sugarloaf Regional Trail will be dedicated in honor of the region’s Native American history. 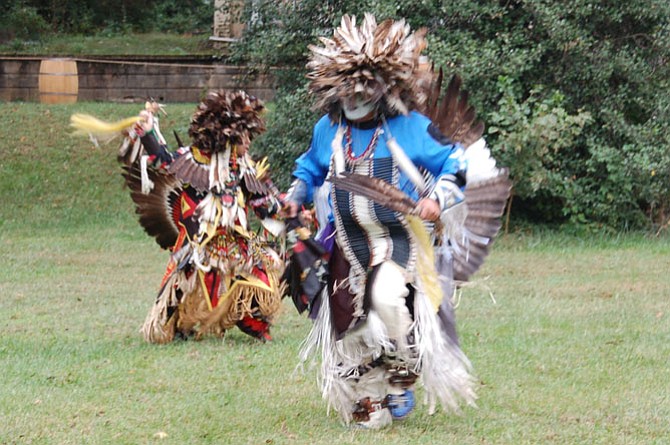 Wearing traditional attire and performing traditional dances and songs, the Piscataway tribe will help dedicate a 25-mile stretch of hiking trail that stretches from Point of Rocks to Seneca in honor of the region’s Native American cultural heritage on July 25. Photo Contributed 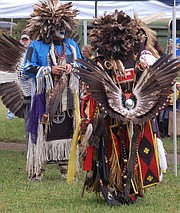 Representatives of the Piscataway tribe will be on hand for the July 25 dedication of a 25-mile portion of the Sugarloaf Regional Trail in honor of the Native Americans who once called the area home.

A project more than 30 years in the making will see its completion on July 25, as a 25-mile portion of the Sugarloaf Regional Trail is dedicated to the area’s Native American tribes.

Rain forced the postponement of the ceremony, which will feature dancers from the Piscataway tribe, but the delay was of little consequence to Margaret “Peg” Coleman, president of Sugarloaf Regional Trail.

In the 1970s, she and Chet Anderson, head of the trails organization, began writing trail guides, publishing a series of books since 1974, providing a wealth of information on the historical properties in Montgomery County and the surrounding areas in the meantime.

Native Americans used to live on Conroy Island. The Point of Rock Route 15 bridge is in the background. People can not get to the Island unless they use a boat.

The view at Seneca from the C&O Canal.

The dedication of a 25-mile portion of Sugarloaf Regional Trail’s Native American Heritage Trail is scheduled for Saturday, July 25, from noon until 4 p.m. at the Monocacy Aqueduct. Members of the Piscataway Dance and Drum Corp will be on hand performing, explaining their traditions and costumes while explaining the uses of native plants. For more information, go to www.sugarloafreti....

"This trail sheds light on such things as how Native Americans here lived, what types of villages and buildings did they have, how did they use the forests, rivers and fields to support these communities.”

“We are a small non-profit organization with a large commitment to record and preserve Montgomery’s upcounty area, especially Sugarloaf Mountain and the Potomac River,” she said. As a result, the organization has spent the past three years exploring, researching and gathering information on a specific portion of the trail that is of special significance to the area’s original residents.

In the first year, her group identified the boundaries of the trail, which will reach from Point of Rocks, home of the Piscataway tribe from the mid-1600s until 1722, down to Seneca, which the tribe called “Cohongarooto,” or “The land above the falls.” Much of the information used in determining which portion of the trail to include in the dedicated area came from the Maryland Room in the C. Burr Arts Library in Frederick, along with collaboration with Virginia Busby, an archeologist, who introduced Coleman to the Piscataway Tribe.

“This year, we go heavily into research, finding wondrous information, visiting a local archeological dig, handling local artifacts and meeting with the tribe,” Coleman said. The tribe was invited to “dedicate the trail with joyful sounds and dances.” Next year, her group will publish trail guides pointing out plants and wildlife of importance to the tribe in the region.

Most importantly to Coleman and the tribe, the trail will provide a symbolic return to land of great importance to their culture.

“The Piscataway Native Americans we met with are enthusiastic about the dedication. They are coming home, and requested passage for their elders to Conoy Island,” Coleman said. “There is no road access to Conoy Island. With Dr. Busby’s assistance, we arranged with the Department of Natural Resources to carry them to their island on the day of the dedication where they will have a private ceremony. The DNR generously agreed and has already taken members of the Sugarloaf Regional Trails across to Conoy on an exploratory trip.”

She noted that the Piscataway tribe had no written language during the era in which they lived at the intersection of the Monocacy and Potomac Rivers, where the trail will be dedicated, and instead used stories to pass along their history and heritage.

“Heritage Montgomery supports this effort because of the importance of celebrating the historic First Peoples of the area,” she said. “In a time when understanding and protecting our natural resources is becoming increasingly important, it is very helpful to look back to earlier cultures and understand how they used and stewarded the land we now call home.”

Until the trail is dedicated, “there is no significant interpretation of Native peoples available to the public,” which makes this trail the first in Montgomery and Frederick counties to tell the stories of the tribes who lived here. “There are many Native Americans living here today and many are eager to share their culture and history. This trail sheds light on such things as how Native Americans here lived, what types of villages and buildings did they have, how did they use the forests, rivers and fields to support these communities.”

While the trail is located along the C&O Canal towpath, Coleman stressed that the towpath will not be changed in any way.

“The irony is that the Indians were long gone before the canal was built and its builders went right through one village, destroying half,” Coleman said. “The towpath is a National Park and will be enhanced by this information, but in no way at all will it be disturbed. We hope visitors will have our trail guide in one hand and that the new information will bring them joy, increase their knowledge and open their minds to the ancient cultures.”