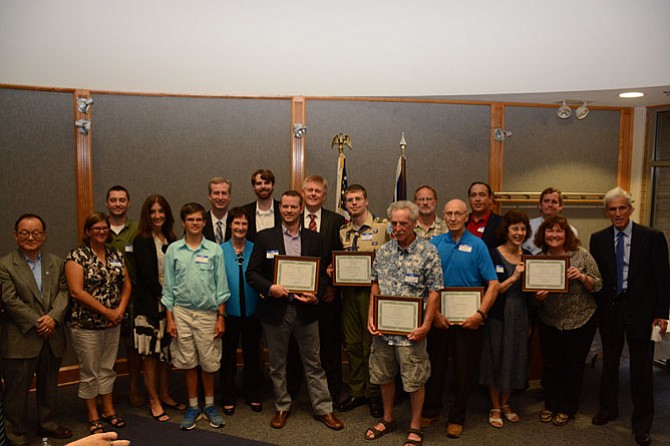 Winners of the 2015 Best Of Braddock Awards stand at the front of the Braddock District government office with local elected officials on July 8. Photo by Tim Peterson. 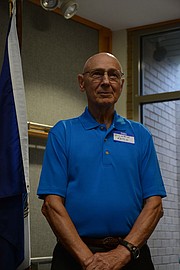 Duwain Ketch of Burke Centre was named Citizen of the Year at the 2015 Best of Braddock Awards and recognized for his work to support the Kings Park and Burke Centre Libraries.

Thanks to Jim Watkins, a striking statue of a barracuda emerging from the water now graces the Commonwealth Swim Club. Watkins and other volunteers, members of the club, have helped maintain and repair areas of the facility, including restoration of the storm runoff channel, new lighting and landscaping.

“It was so overgrown,” said Watkins, a pile driver by trade. “Something’s gotta change here.”

Watkins and the other volunteers were recognized for their efforts at the July 8 Best of Braddock Awards with the Neighborhood Enhancement or Beautification distinction.

“The improvements and changes to the physical appearance of the swim club have not gone unnoticed by the community and local neighbors,” said Cliff Keenan, chairman of the Braddock District Council, “and have helped bring in new members, providing a greater degree of financial stability.”

Watkins said he tends to spend more time around the pool facilities working than at home and that he “loves doing it.”

Each of the Best of Braddock winners had a different story of motivated civic engagement, both from private volunteers and government employees that went above and beyond the normal call of public works.

Opening the program, supervisor John Cook (R-Braddock) referenced the John Mayer song “Waiting on the World to Change.” “We are the direct opposite of that,” Cook said. “Not every county has that same spirit of volunteerism and dedication to the community that’s exemplified by people getting awards tonight.”

Keenan echoed Cook, saying these citizens are “doing so many amazing things.” Then, speaking directly to the audience packed into the Braddock District government office meeting hall, said, “I encourage each of you to get as involved as possible.”

The full list of Best of Braddock Award-winners includes:

*Special Recognition for a team of public employees, awarded to the Fairfax County Park Authority team that worked with Olde Forge-Surrey Square neighborhood residents to renovate their area playground.

*Neighborhood Enhancement or Beautification in the Braddock District went to James Watkins and members of the Commonwealth Swim Club.

“She oversaw the accomplishment of community goals while being a good steward for the Chesapeake Bay watershed,” Keenan said. 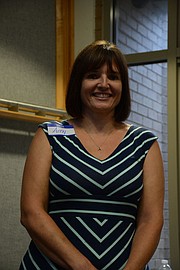 Amy Zydel of Olde Forge-Surrey Square was also named Citizen of the Year at the 2015 Best of Braddock Awards. She was recognized both as a champion for foster care children and parents in Braddock District and around Fairfax County.

*Club or Organization Making a Difference in the Braddock District was awarded to Friends of Long Branch Stream Valley, an advocacy group that organizes trash clean-up activities, works with the Park Authority on trail maintenance and helps sponsor informational nature walks.

*Most Can-Do Public Employee-Local was presented to Dennis Barton of the Fairfax County Park Authority for his help on Jonathan McCarty’s Eagle Scout service project to build a drainage ditch near Lake Accotink. The project required removing an estimated 26,000 pounds of dirt.

*Young Person of the Year went to Jonathan McCarty, an Eagle Scout with Boy Scout Troop 1115 whose final service project involved digging a drainage ditch along the main hiking trail to the west of Lake Accotink. McCarty has since become an adult leader with Cub Scout Pack 1115.

“Duwain is a shining example of a model volunteer who works diligently and with a pleasant demeanor,” said Keenan, “and one who volunteers willingly without need for recognition.”

The second *Citizen of the Year award went to Amy Zydel, a resident of Olde Forge-Surrey Square. Introduced by Keenan as “a pre-eminent champion for foster care children and foster care parents,” Zydel was recognized for her operation known as “The Closet,” a garage stockpile of foster parent supplies and equipment culled from churches, yard sales and donations.