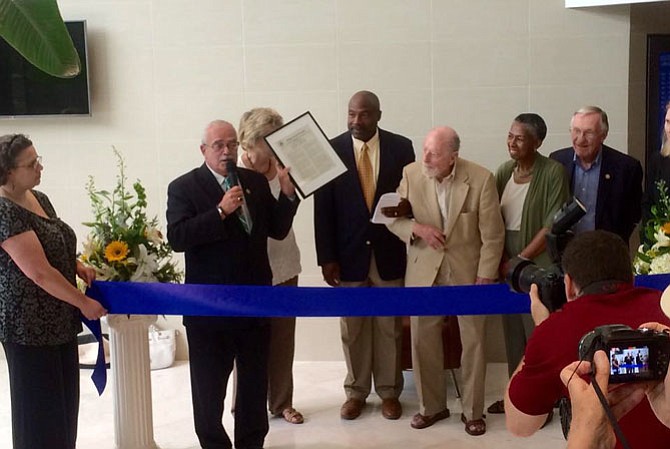 “This place is a quintessential place for kids to learn. The infrastructure here fits nicely,” said Mark S. Ingrao, CEO of the Greater Reston Chamber of Commerce. The preschool previously was located for 25 years on Cameron Glen Drive in Reston. This site will become an indoor recreation center for the area known as Town Center North. The Town Center North area is about a mile from the future Reston Town Center Silver Line Metro station, expected to open by 2020.

A COMMUNITY OPEN HOUSE was held from 12 to 3 p.m. The Robert E. Simon, Jr. Children's Center has serviced the children of families in both Fairfax and Loudoun County, and employs 23 staff members. The preschool can service 110 children, and currently has 76 enrolled in its programs.

“The conclusion has been education starts primarily in the home, the peer group and school room. When you think about it, the first years are the most important years,” said Simon. The real estate visionary bought 6,750 acres in Fairfax County in 1961. In the past 50 years, the Reston community has grown to include nearly 60,000 residents and about 60,000 daily workers. Simon had his 101st birthday this year, and took the opportunity to tour the preschool’s new facility.

“There is a strong sense of community here. It is a home away from home for parents, children, and staff,” said Leila Kaszubinski, an assistant director at the preschool. The new location includes a full service kitchen as well as break rooms for the staff. Pat Hynes, Hunter Mill representative to the Fairfax County School Board, and chair of the board also visited the Simon Center. “They are doing important work here. The new space is beautiful,” said Hynes, a resident of Reston.

“We are excited about this new place and glad to have the center here,” said Celia Jiao, a lead teacher at the preschool and Reston resident since 1988. “When people look at the quality of life, there is not a better investment than preschool education. Early experiences make a dramatic impact in the long haul,” said Del. Plum. Plum praised the staff at the Children's Center, saying it is a top-notch location. Representatives from Bartaco Reston and Barcelona, a Spanish tapas restaurant, also brought food samples to the grand opening event.

“This school is committed to serving a broad range of kids,” said Sen. Janet D. Howell, a resident of Reston who serves on the nonprofit Southern Regional Education Board (SREB). A goal of the SREB is to increase accessibility of early childhood program. Terry McAuliffe, Governor of Virginia is a board member of the SREB.

THE SIMON CENTER preschool classes have learning centers that include art, reading, dramatic play, science, math, computers, sensory, music, etc. Children are encouraged to explore, and choose activities to foster their development in all these areas.

The Simon Center opened in January 1990 as part of the Reston Area Child Care Consortium, a consortium of employers, community residents, parents, educators and varied professionals concerned about the childcare needs in the community. The center is licensed by the state of Virginia, and has been accredited by the National Association for the Education of Young Children (NAEYC) since August 2000.