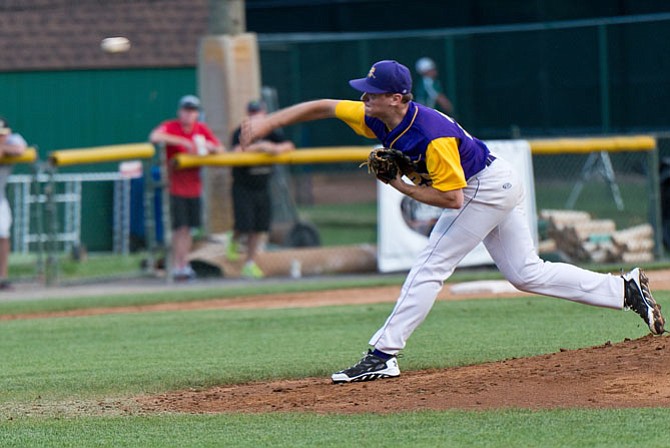 After scoring two runs in the bottom of the eighth inning to beat the DC Grays in a nail-biter in the first round of the Cal Ripken Collegiate Baseball League playoffs, the Vienna Riverdogs will take on the Baltimore Redbirds in a best-of-three semifinal series. The series, originally scheduled to begin Monday, will now begin tonight due to inclement weather.

During the 2015 summer season, the Riverdogs posted a 21-19 record, second in the Cal Ripken Collegiate South, allowing them to advance to the playoffs for the second time in five years. The Redbirds took first in the North division, putting them in a position to compete for their fourth consecutive league championship.

“On paper, [the Redbirds] have the best team in the league,” Riverdogs manager Bruce Hall said. “On paper doesn’t always win games.”

During the regular season, Baltimore took three of four games against Vienna, but only one game was decided by more than one run.

Even after having lost several starters to injuries and vacations, including big-hitter Nate Lowe, who was ranked second in the league in home runs, Hall is confident that his team will be able to produce offensively, naming Louisburg College’s Jordan Sergent, James Madison’s Mike Sciorra, West Virginia’s Shaun Wood, and Virginia Tech’s Jack Owens as some of the team’s strongest offensive players.

“Even though we’ve lost four or five starters, we can still hit the ball pretty well,” Hall said. “These guys can all play.”

Baltimore’s Jason Morgan is ranked second in the CRCBL in wins (5), with teammates Dakota Forsyth and Emerson Gibbs tied for third (4).

“The Redbirds can definitely pitch really well. I think that as a team we have struggled with that in the past, but as the season has progressed we have been taking really good at bats,” pitcher Jack Gomersall said. “[Coach Hall] has put a strong emphasis on having a good approach every time up. Overall our team has hit the ball very well this year, and if we can get a few runs across against the Redbirds’ pitching staff it could be a very entertaining series.”

MLB prospect Kevin Lachance returned from several injuries and the shortstop is expected to lead the Riverdogs through the postseason. Lake Braddock graduate Jack Owens has also proven to be productive, and drove in four runs in the first-round game against the Grays.

Strong pitching will be key to the Riverdogs’ success versus Baltimore. Virginia Military Institute pitcher and JEB Stuart High School graduate Gomersall leads the league in both wins (6) and ERA (0.44), while Wofford College’s Jordon Accetta has the most strikeouts in the CRCBL (43). James Madison’s Mark Gunst has an ERA of 1.70.

“We’ll compete at the plate, play good defense, and get some good pitching,” Hall said. “We’ll have to play well and [the Redbirds will] have to be held down.”

Gunst will get the start in Game 1 tonight.