First-Place Big Train To Be Well Represented In All-Star Game The first-place Bethesda Big Train had at least 10 members selected to the Cal Ripken Collegiate Baseball League all-star game, according to the league Web site. The game will be held at 7:30 p.m. on Wednesday, July 16 at Shirley Povich Field in Bethesda. Gates open at 3:30 p.m. and the home run derby is scheduled to begin at5:30 p.m. Wes Rea will represent the Big Train in the home run derby. 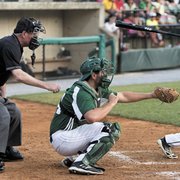 Entering Tuesday’s action, Bethesda was in first place in the CRCBL with a 24-6 record, 5.5 games ahead of the second-place Baltimore Redbirds.

Bullis Grad Stucky To Play Lax for Boston U

Stucky was a four-year varsity athlete for the Bulldogs. He was an Under Armour Underclassmen All-American as a junior. As a senior, he was a team captain and earned Bullis’ Hustle Award.