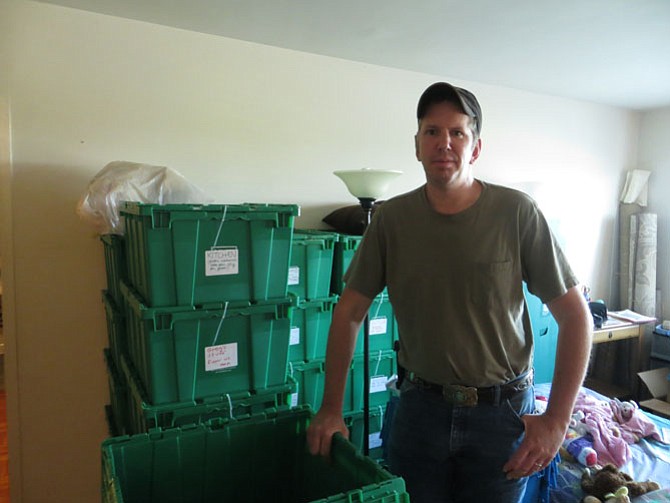 Greg Cain with the moving boxes in his family’s Hunting Point apartment. Photo by Vernon Miles. 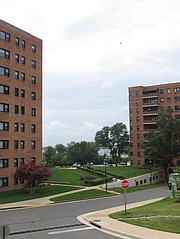 The Hunting Point towers and the courtyard between them, future site of a new amenities complex.

While the city prepares to gain a little over 100 affordable housing units at Potomac Yard and The Filmore, one of the city’s bastions of affordable housing is in the process of pricing out residents, formerly protected by a rent freeze, who can’t keep up with rapidly rising rent costs.

According to Helen McIlvane, Alexandria’s director of housing, there are 530 units in the Hunting Point apartment complex and roughly half are “efficiencies,” apartments that are less than 300 square feet. Exactly how many apartments would fall within the “affordable” range and how many will remain following the complex’s renovation into luxury apartments is unknown. After three weeks of requests, the property managers of Hunting Point on the Potomac remained unavailable for comment.

The Hunting Point towers, originally built in the 1950s, were purchased by the Virginia Department of Transportation in 2001 to make way for the new Woodrow Wilson Bridge construction project. One of the towers was torn down, and to maintain occupancy while construction was ongoing, the apartment rents were frozen at 2001 levels. As the years went by and the construction progressed, the towers became an affordable housing zone largely by virtue of the rent freeze.

But in 2012, as the Woodrow Wilson Bridge was completed, VDOT began looking for buyers for the project. VDOT was unable to come to an agreement with Kay Management, the former property owners, and wound up selling the remaining two towers to The Laramar Group, LLC.

Despite their uneasiness, residents of Hunting Towers say that they were told by the city that Laramar would be a good fit for the development and that the citizens’ concerns were unwarranted.

“I am convinced that Laramar is being very responsive to everyone’s need and collaboration and patience would be appropriate at this time,” Mayor William Euille said in a July 2013 email responding to residents expressing concerns. “They have demonstrated a very strong commitment to enhanced communications to the tenants and the city.”

Seven months later, Laramar would be given a “stop work” order by the Environmental Protection Agency (EPA) for their renovations after asbestos was discovered in the walls, floors, and ceilings of the apartments. But residents of Hunting Point say this was just the beginning of their nightmare.

Since purchasing the project, Laramar has begun renovating many of the apartments, but many of the residents say the renovations are mostly cosmetic and done with little regard for the current tenants.

“These buildings will never be luxury apartments,” said Maurice Barboza, who's lived in Hunting Point since 1995. “They have air conditioning units that were built a decade after the apartments were. You have heat that’s unreliable, plumbing that you have to turn off for an hour or so to make repairs.”

When Laramar began replacing the domestic water lines, Hunting Point resident Tara Cain had to empty her closets and cover all of her furniture in plastic. With sensor equipment being installed in the walls, many of her neighbors never got that closet space back. While demolition began, Tara Cain and her family were not moved to a temporary location, and lived with dust in the air and construction workers continually coming in and out of the apartment. But the new pipes routinely had water flow issues and would get clogged. Rather than compensation, after the involuntary “upgrade.” Tara Cain found that her rent had been increased.

Since Laramar had purchased the towers in 2013, Tara Cain’s rent has risen by $170, a nearly 20 percent rent increase. Alexandria’s Voluntary Rent Guidelines in the Alexandria Guide to Landlord-Tenant Laws and Policies say that tenants should face an annual rent increase of no more than 5 percent if the tenant pays utilities.

“We know the renovations have been very hard,” said McIlvaine. “We’ve been very disappointed that the developer has not provided assistance to residents in these circumstances despite urging from mayor and council to assist with moving and relocation. But Virginia law doesn’t require them to do that, though many do by choice.”

According to McIlvaine, the problem largely stems from the fact that the apartments were largely de facto affordable as a result of the rent freeze, rather than de jure as committed affordable units. McIlvaine says there are no committed affordable housing units at Hunting Point. In essence, this leaves the affordability dependent on Laramar.

But given the city’s impotency when it came to helping its citizens living at Hunting Point, many residents feel betrayed by the city’s recent approval of a clubhouse that grants Laramar a special exemption from open space regulations. At its July 7 meeting, the Planning Commission approved an 8,000-square-foot amenity building in the courtyard between the towers, currently a park. As part of the approval, Laramar volunteered $14,709 in support of the affordable housing policy, the cost of 10 months in one efficiency.

Jim Mercury, a former resident who was displaced by the rent increases, noted that the Planning Commission’s approval directly contradicted City Council Resolution 2501 adopted in 2012, which “reaffirmed the city’s current zoning and environmental requirements with regard to the Hunting Towers property” and informed “all prospective buyers of the Hunting Towers property of these existing zoning and environmental requirements.”

Citizens appealed other concerns to the Landlord-Tenant Relations Board but were told the Dillon Rule restricts the city’s ability to intervene on the citizens’ behalf.

“Mayor Euille sat there and told me that we’d love this company, that they have a commitment to affordable housing,” said Greg Cain. “He lied to our faces.”

Greg Cain isn’t alone in this sentiment. Maurice Barboza, who wrote the letter to the mayor and City Council that Euille responded to, said that Euille spoke to him and said that the prospective buyer was going to be a great landlord.

Euille responded that he had not been briefed on the current situation at Hunting Point because City Council is out of session, but that he maintains his commitment to affordable housing in Alexandria. For families like the Cains, however, September will be too late. Tara Cain said her family will be OK, they’re preparing to move to a neighborhood in the West End, but many of their neighbors are relocating further from Alexandria. One elderly neighbor is moving to Manassas.

“Alexandria is getting very rich or very poor,” said Tara Cain. “It’s not a city for the working class anymore.”