Gelato, ice cream shops rise to the occasion in the throes of summer. 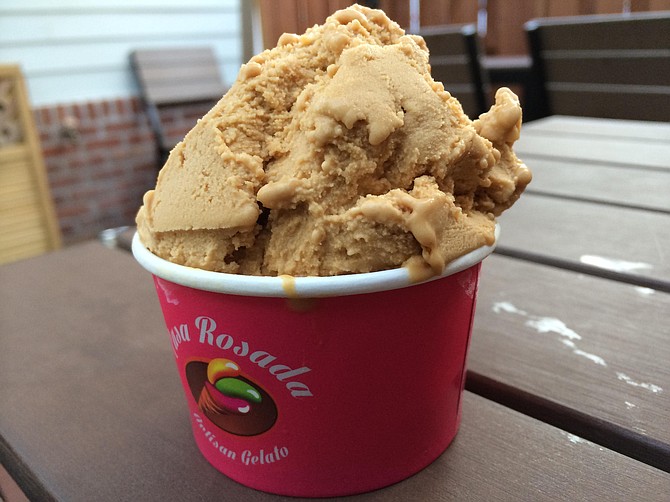 Alexandria — Tucked half a block off of King Street in what was formerly a private residence at 111 S. Payne St., Casa Rosada’s pink-hued façade beckons pedestrians and drivers alike. The gelato café – whose name means “Pink House” in Spanish, an homage to the presidential residence of Argentina, the country where Casa Rosada’s owners hail from – has certainly made itself at home in Old Town in its 13 months of life.

Unquestionably, the shop is a family affair. Ben and Raquel Umansky co-own the café with their sons, David and Mark. And the love of gelato runs deep.

“My mother and father … had been making gelato in their own home for a long time,” David Umansky said. In 2014, “the pieces came together” and they opened Casa Rosada that June. In the ensuing months, they’ve settled into a rhythm: Raquel Umansky manages the day-to-day business of the store, Ben Umansky – a chemical engineer by trade – continues to develop new flavors, and the whole family takes turns running the counter. Recently, the Umanskys hired three employees to share the workload.

And business is booming, especially in the hot summer months. (In the winter, David Umansky says, the foot traffic slows down a bit.) The restaurant rotates among a total of about 40 different flavors, showcasing about half of them each day. Among the specialty selections: PBJ, banana split, and sambayon, a gelato that contains a marsala-wine blend.

Some less-familiar names also dot the landscape, such as granizado. “It’s kind of like vanilla, but layered with melted chocolate,” Umansky said.

But fans of the tried-and-true flavors also won’t be disappointed. Chocolate, vanilla, and their allies remain on the menu daily, along with a rotating cast including pistachio, hazelnut, and mocha.

And while gelato is the star of the show at Casa Rosada, sorbets and soy treats play a supporting role. The sorbets are “vegan and made with water” rather than cream, Umansky said, providing an alternative for those who eschew dairy.

Back in the test kitchen, Ben Umansky has just perfected one of the café’s newest flavors: Tiramisu. “It took a few trials and errors” to get the flavors right, David Umansky said, but look for the finished product on Casa Rosada’s rotating menu.

Trial and error and slow, steady growth are hallmarks of any successful eatery. From at-home hobby to full-fledged family business, the Umanskys have grown their dream into a reality, one spoonful at a time.

A mainstay in Del Ray for years, The Dairy Godmother offers some of the best frozen custard in Alexandria. Located right on the neighborhood’s main drag, it’s within easy reach after dinner at one of Del Ray’s restaurants or a perfect stop-off for a midafternoon snack. And this time of year, the wait can be a dozen people deep. The menu changes frequently, so there’s no telling what will be in store for you upon your next visit, but you can bet it will be an interesting, refreshing, and tasty treat.

Hope Nelson owns and operates The Kitchen Recessionista blog, which can be found at www.kitchenrecessionista.com.