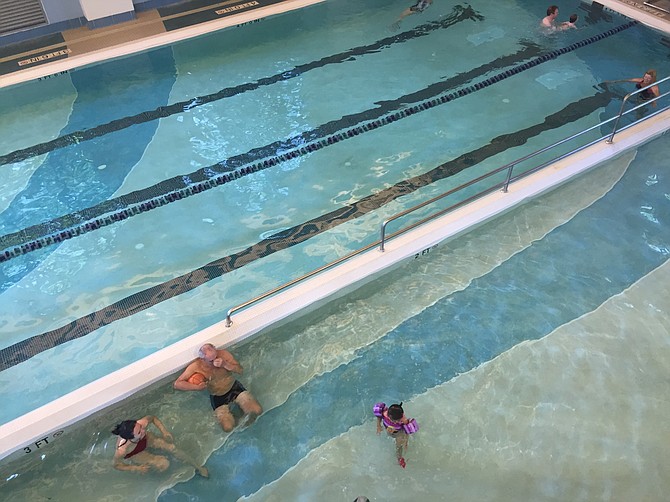 Health officials are reminding the public how to stay stay safe while swimming or engaging in other popular summer activities. Photo by Marilyn Campbell.

It’s a familiar call. The sun beams down from mid-summer sky. Temperatures rise above 95 degrees Fahrenheit, but safety conditions start to plummet.

“People will have been walking on the mall all day and then go to Arlington National Cemetery to watch the Changing of the Guard and they start to feel light-headed and dizzy,” said Lt. Sarah-Maria Marchegiani, spokeswoman for the Arlington County Fire Department. “The times that I’ve responded, they usually have only one small water bottle with them and they’ve been in the heat all day. It’s often tourists, but people who live here, too.”

While summer ushers in vacations, trips to the pool, barbeques and fireworks it also brings the potential for safety hazards. From recreational water illness to heat-related illnesses, summer fun can turn into a nightmare. Public health and safety officials have several tips for lessening summer safety risks.

WHEN THE TEMPERATURE SPIKES, so does the risk of heat-related illnesses. Lengthy exposure to 90-plus degree heat can lead to heat stroke, heat exhaustion cramping and, in extreme cases, death.

In addition to wearing loose-fitting clothes that are light in color and taking breaks from the heat and drinking two to four glasses of water for every hour one is exposed to high heat, health officials say applying sunscreen, limiting physical activity and wearing a hat or using an umbrella to block direct sunlight should also be added to the list of summer safety precautions.

"People can underestimate the power of the heat. Safety is always our number one priority," said Marchegiani. “If you have an elderly neighbor or anyone with mobility issues, check on them, especially when we have a storm and the power goes out.”

WHILE STRATEGIES for beating the heat include trips to the pool and water parks, these cool-down activities come with health precautions. Being aware of the potential for spreading germs can prevent recreational water illnesses, which can occur as a result of swallowing or having other contact with contaminated water.

Health officials advise swimmers to shower with soap before entering a pool, take bathroom breaks once per hour and take a rinse shower before returning to the water.

Washing your hands after changing diapers or using the restroom and checking a child’s diapers every half-hour to an hour are tips that are also advised.

Water safety is another summer concern. “Enroll children over the age of three in swimming lessons,” said Fluellen. “Don't rely on lifeguards to watch over your children.”

INSECTS ARE ANOTHER summer sighting that can be a prelude to danger. In fact, the Fairfax County Board of Supervisors proclaimed June at Fight the Bite Awareness Month. One bite from a disease-carrying mosquito or tick can lead to life-changing illnesses such as West Nile virus or Lyme disease.

“Anyone can get infected with these illnesses, but people over the age of 50 are at greater of developing more severe forms,” said Joshua Smith, Fairfax County environmental health supervisor. “We can find mosquitoes with West Nile virus anywhere in the county that is why we encourage people to take precautions.”

Those safety measures include eliminating standing water, treating standing water and spraying your yard. Using an insect repellent containing DEET, remaining indoors at dawn and early evening, and installing, repairing or replacing screens on both windows and doors to keep insects outdoors are also recommended.

“It is important to use common sense, stay hydrated and respect Mother Nature,” said Kurt Larrick, spokesman for the Arlington County Department of Human Services. “And some groups are more at risk [such as] infants, teens, older adults, and those with certain health conditions.”