Author to speak at Aldersgate United Methodist Church on June 9. 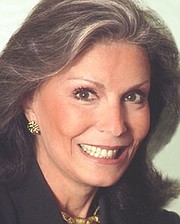 Meryl Comer will be giving a presentation and signing her book, “Slow Dancing with a Stranger,” her memoir recounting her last 20 years as a caregiver, first for her husband and now also for her mother, both of whom suffer from Alzheimer’s.

The event, which will take place at Aldersgate United Methodist Church on Collingwood Road, was organized by Christi Clark, education and outreach coordinator at Insight Memory Care Center, which provides care for Alzheimer’s patients from early to late stage. Insight also provides resources to caregivers, “It’s important to caregivers to feel connected,” said Clark, pointing out that Insight “not only provides care for the person living with dementia but also their caregiver.”

Clark hopes that the event will create awareness for caregivers and allow them to have that conversation with one another, as well as giving attendees the opportunity to connect with resources available to them. One of the advantages of their programming, Clark stresses, is the ability for patients and caregivers to form relationships with other families going through similar issues.

Comer’s book signing will be preceded by an hour-long presentation. She plans to use a town hall format, to give caregivers like herself a space to discuss their roles. Her book aimed to be honest about her own experiences, and she’s heard from readers that it helps them do the same. “I’m not here to preach,” she said. She does hope that a dialogue can be opened up around the often isolated experience of a caregiver, “to give them permission to say things out loud.”

Caregivers to those with dementia are six times more likely to get dementia, because of the stress.

Comer says that her experience as a caregiver showed that something needed to be done about the disease of Alzheimer’s. She compares the advocacy efforts to those of breast cancer or HIV/AIDS and states that one of the reasons Alzheimer’s resources are so far behind is that the caregivers, the “natural advocates on the frontline of care” for those suffering from Alzheimer’s are “too worn out to protest” and organize to fight for issue advocacy.

Comer used her background as a broadcast journalist, a career she set aside to be a full-time caregiver at the age of 48, to put herself at the frontline of an issue that keeps so many people silent. “Caregivers to those with dementia are six times more likely to get dementia, because of the stress,” she said.

When asked what advice she would give caregivers, she is careful to stress that that’s the last thing she wants to do, instead she wants to open dialogue on the experience of caregivers as well as the broader issue of Alzheimer’s. She wants to correct the idea that this is a natural part of aging. “This is a fatal neurological disease” that is only going to increase with frequency as the aging baby boomer population outlives other diseases.

Comer will continue to speak about her challenges as a caregiver, and to advocate for more research, including genetic testing, early intervention, and greater awareness of cognitive health in general. One hundred percent of the profits of “Slow Dancing with a Stranger,” a New York Times Best Seller, will go towards Alzheimer’s research.

The event will be held at Aldersgate United Methodist Church, 1301 Collingwood Road, Alexandria on June 9, 1-3 p.m., with Comer’s presentation from 1-2 p.m. and the reception and books signing from 2-3 p.m. RSVP to Christi Clark at christi.clark@insightmcc.org or 703-204-4664. The event is free and open to the public. A limited number of books will be available to purchase.