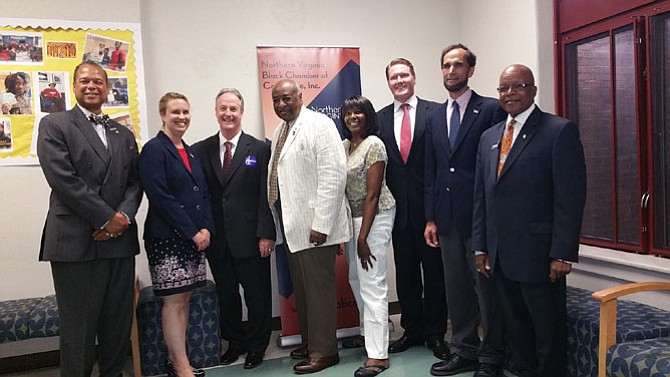 Butler read several questions to the candidates prepared by Gum Springs and Black Chamber of Commerce members. The first was what the candidates were going to do to attract businesses to the area. Each said they would openly solicit for new business. Storck said he believes promoting tourism to visit the historic landmarks and the upcoming U.S. Army National Museum, and attracting health workers to live in the local area where several hospitals and clinics exist would benefit the area’s economy. Sargeant said he would solicit for retail businesses and gain commitments for high density residential development as part of an overall strategy to promote economic development to the area. Dobbyn said he would work to eliminate predatory car title lending businesses while soliciting businesses that would promote jobs and the economy for local residents. Bennett also stated her commitment to attract small businesses to the area.

The second question dealt with the pedestrian safety of the Sherwood Hall Lane and Route 1 intersection. All candidates agreed that a special effort must be made to establish a crosswalk there and to do a safety analysis to look for other actions to prevent accidents from occurring.

All candidates agreed to support efforts to extend the yellow line and bring mass transit to the area.

In the area of education and housing, both the audience and candidates were especially interested in commenting on the problems as they saw them. It began with the question: What were the candidates going to do about 800 children on the Head Start wait list? Storck said that the state should kick in money to fund Head Start; he supports preschool programs and would look for money to eliminate the wait list. Dobbyn agreed to the need to fully fund Head Start and criticized Storck who he pointed out to the attendees now sits on the School Board. He said that Storck takes credit for his effort to build schools in the Lorton/south county area but has done nothing to fund Head Start and neglected efforts to improve academic performance of the schools, one of which his daughter attends. Sargeant offered that a large Head Start wait list “is unacceptable” and if elected he would work with his colleagues on the Board of Supervisors and School Board to match funds with the needs of Mount Vernon, such as Head Start.

The debate and questions moved to funding for mental health services. Bennett said she was told that 25 percent of prisoners in Fairfax County would not be there if adequate mental health services was available. All candidates agreed that more state funding and more attention overall must be devoted to mental health services. Candidates discussed the recent case of the death of a female inmate with mental health issues in the Fairfax County jail where she was tasered several times while shackled. The incident is now under investigation. She was struggling with prison guards who were attempting to transfer her to a hospital for medical evaluation. Sargeant said that adequate training of the guards in how to deal with mentally ill prisoners was essential to preventing this from happening in the future. Dobbyn called for the release of the video tape of the tasering of the deceased prisoner and referred to his endorsement by the Citizens Coalition for Police Accountability as evidence that he is the right person for the supervisor job. He said he will be a strong advocate to protect against misconduct by the police and prison guards. Storck said he would support tax increases to fund mental health programs and other programs needing funding if there are no other options. Sargeant stressed the need for setting priorities as one technique to stretch money to where the need was greatest. Just prior to the close of the forum, Dobbyn said that “the other candidates don’t have the guts to say we may need to raise taxes to fund programs if needed, and if you elect me, I will. “

June 9 is the primary election to determine the Democratic nominee for Mount Vernon District supervisor who oppose Republican nominee Jane Gandee in November. Virginia law allows for an open primary. Voters are not required to declare their party preferences. Whether Democrat, Republican, or Independent, residents have a right to vote in this primary election if registered to vote and live in the Mount Vernon Magisterial district. Voters must present a photo ID at the election precinct to verify their identity.