At forums, four candidates seek to differentiate themselves. 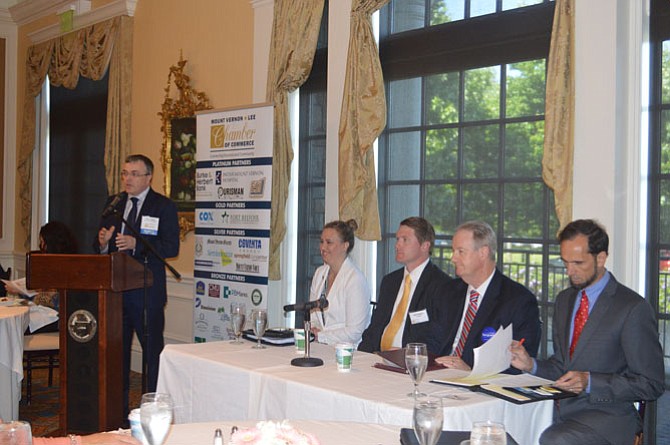 Mount Vernon residents have not experienced such intense political competition to choose a Democratic nominee for an elected local office in a generation. The reason: Democratic Supervisor Gerry Hyland’s decision to retire after 28 years in office.

The open seat on the Board of Supervisors has attracted four Democratic candidates with a variety of backgrounds and experience. Candice Bennett, a resident since 2008 and a business consultant, lives in the Lorton area and this is her first run for elected office. Jack Dobbyn, a native son, attorney and Woodlawn youth league coach is a self-employed businessman and current advisory committee appointee of Hyland’s. Previous to this he ran unsuccessfully against Republican Del. David Albo of Springfield. Tim Sargeant, a current Hyland appointee to the Fairfax County Planning Commission, works in community relations for Dominion Power. He lists among his accomplishments playing a central role in the Lorton area redevelopment and having a hand in developing the plans for numerous other development projects throughout the county over the years. Dan Storck is a small business owner and the current elected Mount Vernon District representative to the Fairfax County School Board.

This past week these four candidates took time out from campaigning to participate in not one but two debates just a few days apart, signaling that the heavily contested Democratic primary election is just around the corner — on June 9.

First, the candidates attended a Mount Vernon-Lee Chamber of Commerce-sponsored debate at the Belle Haven Country Club on May 14. After brief introductions, candidates responded to written questions prepared by the Chamber members in advance.

All four candidates supported placing a meals tax on the ballot as a referendum, although Bennett said she objected to the tax. The current Board of Supervisors has already turned down Hyland’s Meals Tax proposal; therefore, it will not appear on the ballot this fall.

Sargeant, similar to the others, supports affordable housing in the North Hill area but added that he would want to be assured that sufficient transportation and other infrastructure was in place or planned prior to approving a plan for affordable housing.

A question came up from the audience about lack of adequate senior citizen transportation services that threatened seniors to go into a seniors facilities and prevented them from aging in place in their homes. All conceded this was a need but a complicated issue. Storck suggested that more attention should be given to co-locating of services, and use Uber transportation. Dobbyn stressed the need to develop or redevelop communities that are more walkable, and to promote ridesharing as an option. Sargeant also stressed the need to plan more walkable communities through improved community planning.

Widening Route 1 came up as a concern that it has the potential to wipe out some small businesses. Would the candidates support an economic impact analysis as part of the widening planning? All supported such an analysis while also saying they support moving forward without delay in the Route 1 widening effort.

In their closing remarks each provided the audience with their personal brand of experience that they viewed as what best qualified each of them for the job of supervisor. Bennett approached the qualifications from the point of view that she is a newcomer but will not be looking to the past for answers and will be a creative thinker. Her proposed partnering with the Fairfax County Economic Development Authority to award small business incubator micro grants.

Dobbyn, a lifetime resident who lives with his wife and children in an area where his daughter attends a school with classroom trailers and is in need of upgrading, made the case that improving the academic performance of his daughter's school and the other schools in the region would be a very high priority. He added, win or lose, he said is here to stay and is committed to helping the Mountt Vernon community long term.

Storck, who has stood for election successfully several times as Mount Vernon representative on the Fairfax County School Board said that he is dedicated to the community, having raised his children here and has been working for many years in the school system first as a PTSA leader and a youth league coach and then as a School Board member. He said his success as a leader on the School Board has saved the taxpayers money and promoted innovative approaches to education programs, and demonstrates that he will be an effective supervisor who will get things done.

Sargeant pointed to his many years on the Planning Commission and his record of community leadership in a variety of planning projects such as the Laurel Hill development area among several other development projects. He expressed his concern that seven Mount Vernon schools of the 17 schools county-wide not fully accredited were within the Mount Vernon District and that it would be one of his top priorities to turn the schools around and restore them to full academic accreditation. He also committed to establishing a satellite office for the School Board member in his own governmental center office so that the two of them could more closely collaborate on strategies to improve the academic performance of the Mount Vernon schools.

Storck countered then and several days later at the Democratic Committee debate that the problems require more money and teachers to improve academic performance. He argued that turning around these schools is far more complex than it might appear.

Two days later, at the Democratic Committee Political Forum, this issue was raised once again. Dobbyn, and Sargeant both weighed in on the issue and said improving these seven schools would be a high priority on their agenda if they were elected supervisor. In response, Storck said timprovement is definitely needed and repeated that more money is needed to improve and expand teaching programs at these seven schools.

At the Democratic Committee debate, a list of nine questions was prepared prior to the debate by the debate organizers. The moderator, Kris Amundsen, kept tight control on time. The bulk of the attention was devoted to six questions as follows:

In the two debates, the candidates generally agreed on the greatest overarching issues facing Mount Vernon: the county’s financial strains and over-reliance on property taxes, the need to turn around the poor performing public schools in Mount Vernon, and the need to continue the momentum to widen Route 1 and extend mass transit programs to cope with the traffic mess.

June 9 is the date of the primary election to determine who will be the Democratic nominee on the ballot in the November general election. Virginia primary elections are open to all, whether a Democrat, Republican, or independent .