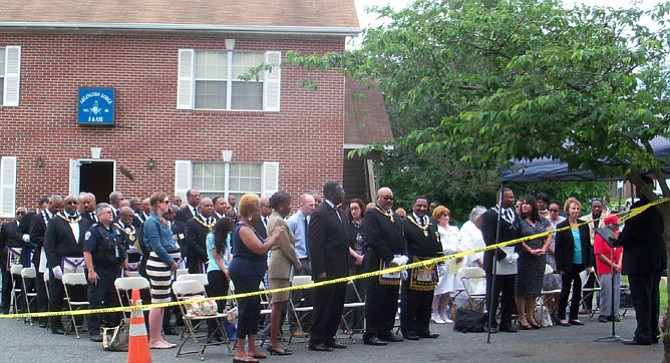 Arlington County erected a marker commemorating the strong and beneficial presence of generations of mostly African-American men in the Nauck community. Photo by Michael McMorrow. 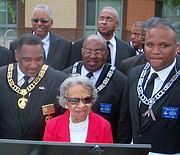 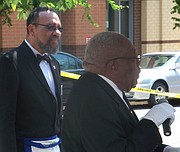 The main speaker was Grand Master Roger C. Brown of the Prince Hall Grand Lodge of Virginia. His words of praise for the past and of encouragement for the future were heard by the members, their families and guests. However, Brown’s presence was overshadowed, slightly, by someone in the audience.

Emma Moorman is the granddaughter of Henry L. Holmes, the first leader of Lodge #58 at its founding in 1888. Holmes exemplified the standard of civic service for all county residents during his lifetime and down through the years. He served as Commissioner of Revenue from 1876 to 1903, was a developer of neighborhoods in Central Arlington and held membership in numerous fraternal and religious organizations. Born in Arlington, Moorman is proud of her grandfather and his accomplishments, but not nearly as proud as Lodge #58 in having her at home nearby. Moorman expressed pleasure at assisting to unveil the history marker and seeing, again, the commitment of local Masons to serving the community. “Everything is just wonderful,” she said.

Currently, Julius D. Spain, Sr. is Worshipful Master of Lodge #58. An active duty military officer stationed in The Pentagon, Spain entered the local Masonic scene about six years ago. He appreciated its history, but quickly realized that the story of Lodge #58 and its good works were unknown outside the confines of the meeting hall.

Spain also was concerned over the erroneous image of Lodge #58 being only for African-Americans. To the contrary, membership is open to anyone subscribing to the principles of the Masonic movement. Spain noted that Lodge #58, a few years ago, had a Caucasian serving as Worshipful Master.

Cynthia Liccese-Torres and John Liebertz work in the county’s Department of Community Planning, Housing and Development. Recovering Arlington’s past and telling about the county’s many and diverse communities is part of their jobs; it also is the main reason they love their jobs.

In short order, the independent goals of Spain and of Liccese-Torrres and Liebertz turned out to be but one, and the result is an educational display standing at 2222 South Shirlington Road not far from the Glebe Road and I-395 intersection.

Dr. Alfred Taylor, Jr., community historian, noted that “nobody can tell your story like you,” but the sidewalk plaque will serve the purpose of leading people to better understand their past.