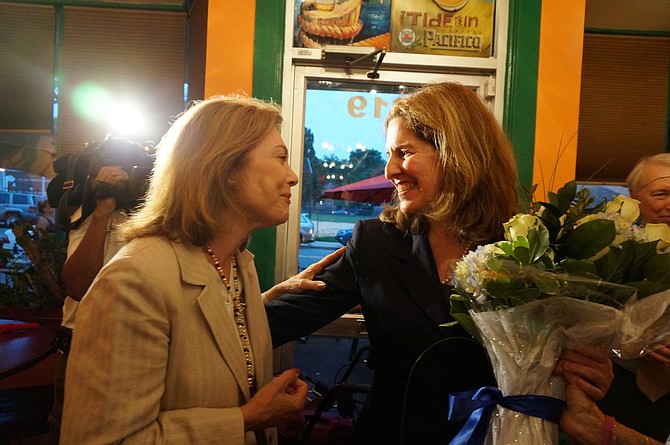 Vice Mayor Allison Silberberg, right, is congratulated by a supporter at Los Tios Restaurant following her victory in the June 9 Democratic primary. Silberberg defeated incumbent Mayor Bill Euille and former Mayor Kerry Donley in the race to determine the Democratic candidate for mayor in November’s election. At this time, she is running unopposed. Photo by Jeanne Theismann. 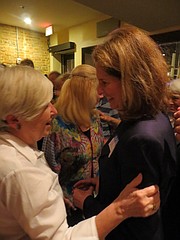 After a tense race with a last minute shift in the polls, current Vice-Mayor Allison Silberberg became the Democratic nominee for mayor. Without a Republican candidate for mayor, Silberberg is currently unopposed in the race to be Alexandria’s next mayor, unseating incumbent William Euille. 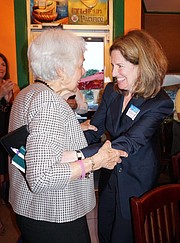 Vice Mayor Allison Silberberg, right, is congratulated by former Mayor and state Sen. Patsy Ticer on her victory in the June 9 Democratic primary.

“I am honored to stand before you as the next mayor of Alexandria,” said Silberberg. “We will continue to fight to preserve Old Town, the West End, and everything in-between.”

Silberberg won by 312 votes, roughly 2 percent, in a 13,437 vote election. Euille has been the unopposed incumbent mayor since his election in 2003. In this primary, Euille ran against Silberberg and former Mayor Kerry Donley. With 27 percent of the vote, Donley trailed behind Silberberg and Euille. Euille led in the polls for much of the evening, but the City Hall voting precinct was one of the last to report in. The City Hall precinct covers much of Old Town, an area Silberberg had focused heavily on preserving during mayoral debates, and Tuesday night it paid off. City Hall had one of the city’s largest voter turnouts and, with nearly 65 percent of the vote, voted overwhelmingly in favor of Silberberg.

“There are people here who’ve lived in their homes for decades,” said Silberberg. “We need to listen to them.”

At the Democratic event, Donley congratulated Silberberg and said the party needed to stay united for the upcoming November election. While Euille had earlier been in attendance at the event, the incumbent mayor was at a separate campaign event during Silberberg’s announcement.

In the race for the 45th District, Mark Levine won the Democratic nomination with 27.8 percent of the vote. Levine and four other candidates ran to replace Del. Rob Krupicka, who resigned after the current legislative session. With a campaign financed by private individual donors and a $70,000 personal loan, Levine said his campaign was a grassroots effort.

“We won because people invited me into their living rooms and we chatted,” said Levine. “And now, we owe no one anything.”