Mount Vernon: Moving on ‘Move Over’ 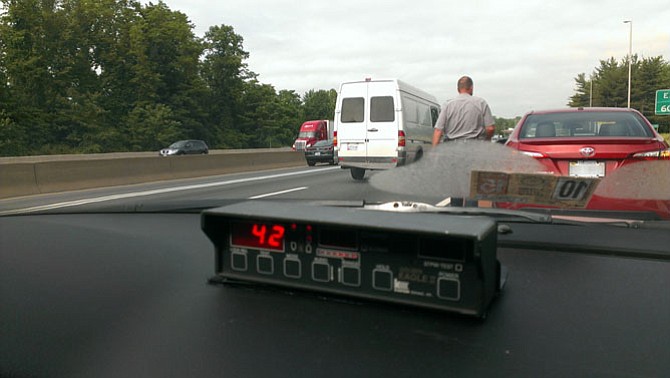 Master Police Officer Joe Moore approaches the driver’s side of a vehicle while the radar system in his police cruiser registers the speed of cars passing directly next to the shoulder. Photo by Tim Peterson.

A Virginia State Trooper pulls over a driver that sped past a parked police car with its emergency lights flashing. 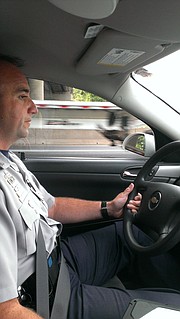 Master Police Officer Joe Moore watches his radar while parked behind a Virginia State Trooper that has pulled over a driver.

He’s sitting on the right-hand shoulder, parked, with his cruiser’s emergency lights on. A dozen yards ahead of him, a Virginia State Trooper has a vehicle pulled over. A black sport utility vehicle blasts by in the closest lane going 64 miles per hour. The additional lanes were all clear. Moore guns the Chevrolet Impala and flags the driver down.

During his first chat with the driver, Moore says she claimed she didn’t know what she did was illegal. On his second visit, after running her driver’s license and plates, she changes her tune. “Everyone was doing it,” Moore recapped. “Honesty is rare,” he added, as he begins writing her a ticket.

Moore was partnered with the trooper for a multi-hour shift of “selective enforcement” of the “Move Over” law (looking for specific violations “but not turning a blind eye to other things,” he said).

Virginia Code 46.2-921.1 requires drivers to either change lanes when approaching an emergency vehicle stopped on the highway with lights flashing or, if there’s no option to move over, “proceed with due caution and maintain a safe speed for highway conditions.”

The law first went into effect in 2002 and was amended in 2010 with the addition of highway maintenance and roadside assistance vehicles whose amber flashing lights differ from the blue and red of police cruisers.

Enforcement of the law hasn’t been “prevalent” however, according to 2nd Lt. Jason Long, traffic safety section supervisor with the Fairfax County Police. According to the National Highway Traffic Safety Administration, 138 law enforcement officers were struck and or killed on highways between 2003 and 2013.

“You would think with 13 years of a law being on books, people would know about it,” Long said. “We don’t want that to be the way people become aware of these laws.”

To coincide with Virginia declaring June “Move Over Month,” Fairfax County traffic police and Virginia State Police collaborated on a education and enforcement event Friday, May 29. Teams of police offivers and troopers leapfrogged across major roadways including Routes 28, 50, 286 (Fairfax County Parkway), 267 (Dulles Toll Road) and Interstates 66, 495 and 95 for several hours in the late morning and early afternoon.

While one officer was stopped with another vehicle (pulled over for speeding, missing registration stickers, etc.) on the side of the road, the second officer would park with lights flashing to their rear and watch radar for vehicles speeding past. Once they pursued someone in violation of the Move Over law, the two would switch places.

Generally when a car is pulled over, there isn’t another officer hanging around to enforce the law. However, the state and county police were able to staff this event to facilitate both enforcing and educating the public.

Over the course of the event, Fairfax County officers issued 34 summonses and eight warnings, 13 of which were for violation of the Move Over law. Virginia State Police handed out 160 summonses: 69 for the Move Over law, six for reckless driving and 27 for speeding.

Of the individuals Moore pulled over, three said they didn’t know about the law. Long said this type of anecdotal evidence is really the only way they have of measuring the success of efforts like the selective enforcement blitz.

“Everyone knows speeding is a traffic violation — they don’t say, ‘Oh, I didn’t know I couldn’t speed,’” Long said, adding that they want “to see at least the law is in people’s minds.”

Moore will testify in July about his results and perceptions of the day’s event. In the mean time, he’s anxious to try smaller versions of the same leapfrog approach on different days of the week and at different times to see how it will affect the results.