Volunteers sign up to assist in national sports event. 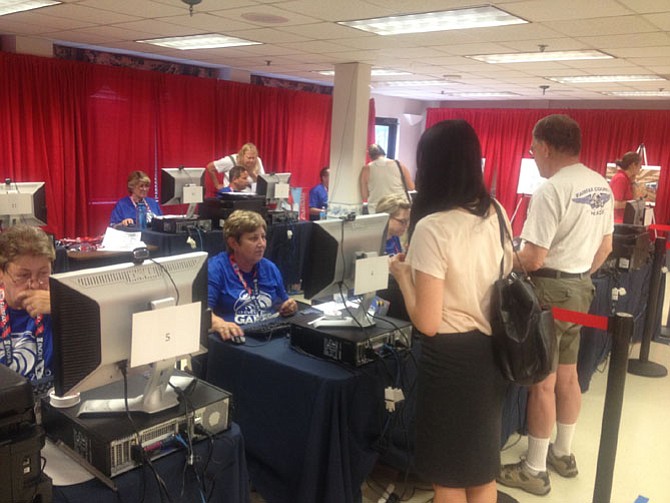 Volunteers have been registering to assist at the 2015 Fairfax World Police and Fire Games at 1800 Cameron Glen Drive in Reston. More than 10,000 police and fire rescue personnel from all over the world will compete in the games, which run from June 26 to July 5 at locations in Fairfax County. Photo by Ryan Dunn.

This week, staff affiliated with the Fairfax World Police and Fire Games have been greeting and authorizing the volunteers and participants in the upcoming events at 1800 Cameron Glen Drive, Reston. Athletes and participants will also check in at the Reston Town Center Hyatt. “It has been busy all day,” said Reston resident Roseann Kuryla, a manager of the games Volunteer Service.

More than 10,000 police and fire rescue personnel from all over the world will compete in the games, which run from June 26 to July 5 at locations in Fairfax County. The World Police & Fire Games started in San Diego, Calif., in 1985 and are held every two years. Helping with the operations are over 6,000 volunteers. “I think the games should bring in some money,” said Fairfax County resident and volunteer Rosemary Brooks.

“We will have a lot of activities in Reston,” said Diana Rothe-Smith, director of Volunteer Management. The games will have competitors from around 70 countries. Reston Town Center will be the central location for World Police & Fire Games athletes when they arrive by the thousands this month. Reston Town Center was selected to host the Athletes Village, and at the Town Center Pavilion, a variety of social activities and entertainment has been planned.

Like the athletes, the volunteers come from different backgrounds. College freshman Heather Jones first heard about the games from her part time job, and decided to volunteer. “The games will bring together a lot of interesting people,” said IT consultant Laurent Trieu, who plans to volunteer at the tennis games. The Tennis event for the Fairfax 2015 World Police & Fire Games will be hosted at both George Mason University and Robinson High School. “I think the games are a great opportunity for Fairfax County, and a chance to cheer on the first responders,” said volunteer Robert Sledzaus, a resident of Reston for more than 25 years. The Opening Ceremony Friday, June 26 at RFK Stadium in D.C., will include a parade of athletes and lighting of the torch. A closing ceremony will be held on July 5 at Wolf Trap National Park in Vienna.

“The public will be very pleased to see the games,” said Craig Luecke, a retired professional firefighter in Fairfax County. Luecke is one of the planners for the upcoming 2015 World Police & Fire Games coming to Fairfax, and attended previous World Police & Fire Games events in New York City and Belfast. Many of the athletes attending do not have sponsors and will be paying for this event on their own. “At the games, there is a true brotherhood and sisterhood when the athletes get together,” said Luecke.

The games will take place Friday, June 26, through July 5 at 53 venues, mainly in Fairfax County. More than 200 Fairfax County officers will compete.

Nine sports competitions will take place in Reston, including:

All Reston events, and almost every sports competition are free and do not require tickets. Reston Town Center will be the central location for World Police & Fire Games athletes when they arrive. Reston Town Center was selected to host the Athletes Village, and at the Town Center Pavilion, a variety of social activities and entertainment has been planned. A soft opening will be held at Reston Town Center on Wednesday, June 24.

The surface parking lot at Presidents Street and New Dominion Parkway will be Champions Square, for the public, athletes, friends and family. Champions Square will feature a Champions Pub, live bands, vendors, souvenir sales, entertainment and a concierge service.

The Liberty Lawn will be between Presidents Street and the Hyatt Regency Reston. This area will feature hammocks for relaxation, lawn games and a “lawncierge tent” to rent soccer gear, volleyball, badminton, croquet, bocce balls and other sporting equipment. The town center pavilion will be open for credentialed athletes and their guests. There will be a silent disco (dancing while listening to multiple DJs on headphones), a tech lounge, games and bicycles for rent.

With the expected numbers of area visitors, many Reston businesses look forward to the games. “We are very excited about the 2015 games and welcome all visitors and game participants to our store,” said Liz Gardner, resident of Reston and manager of the shop Appalachian Spring located at Market Street in Reston Town Center.