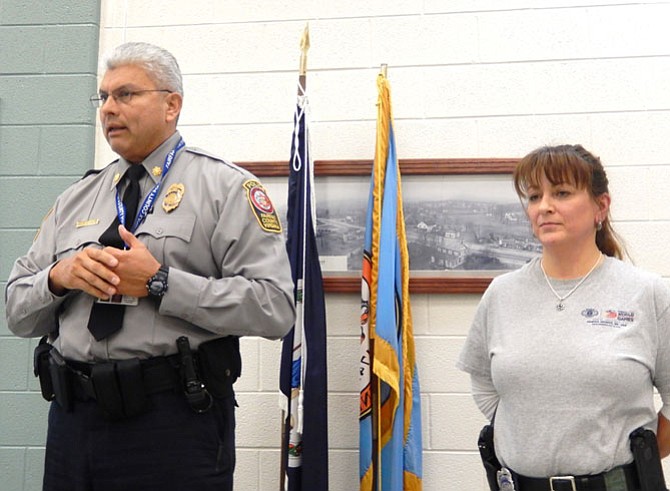 A huge event on a scale Fairfax County has never before seen — that’s the 2015 World Police & Fire Games. It’ll run June 26-July 5 and promises to be a once-in-a-lifetime experience for area residents.

Perez is in charge of bringing together 37 different federal, local and state entities to provide security for the events. These groups include the county Fire and Rescue Department, Sheriff’s Office, Virginia State Police, the U.S. Department of Homeland Security, the TSA, ATF, and Department of State.

The World Police & Fire Games started in San Diego, Calif., in 1985 and are held every two years. “We’re celebrating the camaraderie, honor, courage and athleticism of first responders from around the world,” said MPO Michelle DuBois, one of the county Police Department’s athletic outreach ambassadors.

THE OFFICIAL website is Fairfax2015.com and, said Perez, “It’s getting 9 million hits a day. The local, economic impact is expected to be $70 million to $80 million for those 10 days.” That’s because, in addition to the athletes, themselves, an estimated 30,000 visitors are also expected to attend the games here.

Some 80 county firefighters and 50 county police officers are registered to participate, including Police Chief Ed Roessler Jr. “He registered for the triathlon and has been diligently working out and preparing for it,” said Perez.

Some other local first-responders will be defending their awards won previously. Fire Department Battalion Chief Jerome Williams won a gold medal in stair climbing in the last games, held in New York. And county police officer, Lt. Mark Kidd, is the current gold-medal holder in darts.

But all the participants are special, said Bill Knight, president of the World Police & Fire Games. “These athletes are truly heroes from around the world,” he said. “And they deserve to be treated like Olympians.”

GMU will also host baseball games, as well as basketball, bodybuilding, boxing, swimming, tennis, and track and field. At the Reston Town Center will be the athlete village and check-in, plus the half marathon and honor guard competitions.

Martial arts will be held at NOVA’s Ernst Center, and weightlifting will be at the Herndon Community Center. Meanwhile, archery, cycling, mountain biking and orienteering will take place in Fairfax Station’s Fountainhead Regional Park. And Tysons Corner will host dodge ball and stair racing.

MASS TRANSIT will be used as much as possible to transport the athletes to and from each venue.

“There’s no cost to attend and view any of the events,” said DuBois. “So we encourage people to bring their families and friends to them and enjoy.”

But such a huge undertaking can’t be accomplished without volunteers, and some 4,000 of them are needed. Signups are at http://fairfax2015.com/volunteer.

“We need medical personnel at each venue to cover the athletes, volunteers and spectators,” said DuBois. “People are also needed to check in the athletes and direct them to the next station. Volunteers must be 18 or older and able to read, write and communicate in English. They must also pass a background check to keep everybody safe.”

Urging people not to pass up this opportunity to lend a hand, she said, “You can play a key role in one of the largest, multi-sport, multi-venue events in the world. Instead of just watching, you can be a part of history.”