Years after couple wanted to collect school supplies for their village in Uganda, Arlington Academy of Hope has built a school, clinic there. 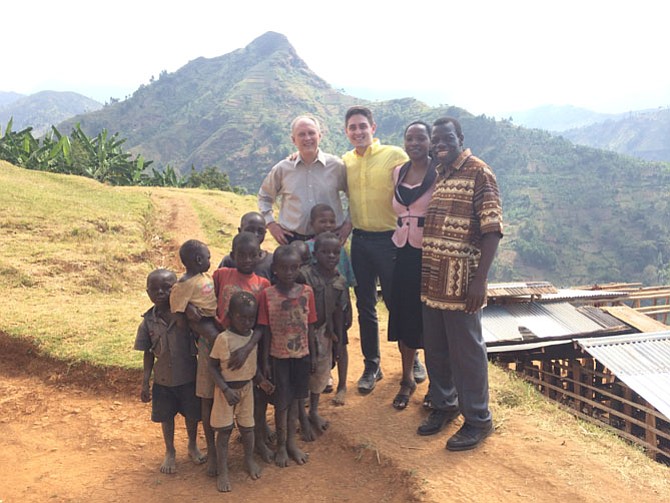 A group of Arlington Academy of Hope teachers and volunteers including, from left, Dean Scribner, Justin Scribner, Arlington Academy of Hope head teacher Sarah Sabano and organization founder John Wanda, along with a group of children from the village, en route to a Sunday morning church service. Mount Nusu, the mountain in the background, is a popular hiking destination in Uganda. Donated photo

When Joyce Wanda won a visa to move to the United States from Uganda 18 years ago, she and her husband packed up and left everything they'd ever known with the hope of some day doing something to help those who remained there.

By 2004, they'd created a community of friends in Arlington through their work, church and their son's school, Arlington Traditional, and the time was right to start giving back.

This is one of many classrooms inside Arlington Academy of Hope, in Bumwalukani, Uganda.

Joyce Wanda asked some of the teachers there whether there were any extra pens and pencils that were left behind or no longer needed. She explained that many children in the village where she grew up didn't have access to those kinds of school supplies on a regular basis, and that even used pencils would be appreciated.

Arlington Traditional School was unlike anything Joyce and John Wanda experienced in Uganda.

That's where the idea for something more began to germinate.

"We wished the kids in Uganda could have a small portion of the gift that students here in Arlington have," she said. It wasn't just the teacher-student ratio they wanted to improve. They also wanted to get supplies to the students, knowing that some children were sharing pencils with up to five other students.

The result is Arlington Academy of Hope (AAH), a primary school in the village of Bumwalukani built with the donations raised by the organization of the same name where children, in much smaller classes than Joyce and John Wanda remember, are getting an education and excelling in ways the village had never dreamed. The school's name comes from the community that helped build it.

Families in Arlington can sponsor a child to attend the school for $360 per year, and those children and their sponsor families correspond at least three times per year, Joyce Wanda said. In a handful of cases, sponsors have made the trip to Bumwalukani to meet the student they're helping to send to school.

She's particularly proud of the school's requirement that at least half the students enrolled there must be girls. Before the school's creation, families often only sent boys to school, as girls were expected to marry, have their own children, or help care others in the village, she said.

Additionally, there's a lending program, in partnership with the international organization Women Microfinance, to help women start their own businesses to further establish themselves and work toward greater stability in the village. The goal is for those women to eventually take a larger role in supporting the school, Joyce Wanda said.

The school's supporters are some of its biggest fans, making return visits time and again to see how things are going and getting their families involved along the way.

Dick Burk, currently AAH's president, is organizing a service trip to the school this summer, one of many he's taken to visit the school.

"I'm trying to organize 14 days in-country, for people who want to know more about Arlington Academy of Hope there," he said. People who are interested in the trip will get to spend most of that time in the village itself, something most people who visit Uganda would not get to see because it's several hours from the nearest airport. There will be opportunities for some sight-seeing, including a hike to a nearby mountain and "the most beautiful waterfalls you'll ever see."

The trip will take place from July 23 through Aug. 6, during the dry season when the students will be attending school, he said. There will also be an opportunity to visit the clinic that AAH's sponsors in the United States and elsewhere have helped to build and fund, which sees more than 20,000 patients in a year, in addition to visiting other schools that are either helped by AAH or modeled after the program there.

Donations from Arlington residents and other supporters helped build the Arlington Academy of Hope school in Bumwalukani, Uganda, to provide a place for children to attend school with smaller classrooms and more highly trained and dedicated teachers.

The same goes for Holly Hawthorne, principal at Arlington Traditional School and the organization's vice president, and her husband, Dean Scribner, who have also made several trips to the village in Uganda and whose son, Justin Scribner, also volunteers there.

As an educator, Hawthorne is especially proud of the progress AAH has made.

She recalled that there was some concern when the first group of students was up for their final test, to determine if their grades were good enough to go from primary to secondary school. The school's backers decided that if three students, out of a class of 24, were eligible to go on to secondary school they would consider it a success.

"All the kids passed," she said. "It was wonderful. But then we realized we had to help them continue." The same thing happened year after year, and money raised by AAH now supports students in primary and secondary school and university.

As a result, Bumwalukani, which once was listed as among the lowest-ranking areas of Uganda in terms of student performance and educational achievement, is now a bright spot in the country.

What's even better, the students who go on to university, in some cases, are studying to become nurses or following other paths in the hopes of returning home to help the village.

For people from Arlington who go to visit the school in Bumwalukani, it's a life-changing experience.

"Living here in Northern Virginia, you only know what you know," Hawthorne said. "Kids have no idea anyone lives like this. I'd never been to a third-world country before and it changed my life. We learned so much from them and they have nothing."

Scribner, who just returned from a trip to the school last month, has thousands of photos from his travels there, showing the school's progress, the clinic the organization helped build, the kitchen where composted materials are providing methane for cooking the lunch of beans and rice the children eat every day. The photos are filled with smiling faces.

They have a photo of the first child they sponsored, Anna, on their piano, next to family photos. She's studying in university now, Hawthorne and Scribner said.

Students at Arlington Traditional and AAH both participate in the same summer reading program each year as part of a sister school program, Hawthorne said.

Bree Hanafin had never been in another country before her first trip to Uganda on behalf of the AAH in 2013. She had just graduated from college and spent nearly a month there.

"You definitely realize how fortunate you are," she said of her trip there. "It's a breath of fresh air."

The school itself is "beautiful," she said, but she noticed, during her first trip, when she took over several bags filled with sporting equipment including baseballs and soccer balls, that the children would have to travel three miles to find a flat area to play soccer. While she was there, she was helping to teach during the students' physical education class, so she started work to help build a flat field closer to the school.

"We raised more than $8,000," said Hanafin, who will be going back to Bumwalukani this summer with Burk's group. "I hope that by the time I get there the project's started."

When asked who should consider signing up for this summer's trip, her answer was immediate.

"Any young person should consider it, it'd be such a great experience," she said. "Seeing kids excited to learn ... it's such a great feeling. I'm so excited to go back. "