Kenmore Students Put Art on the Table in Arlington
Votes

Kenmore Students Put Art on the Table in Arlington 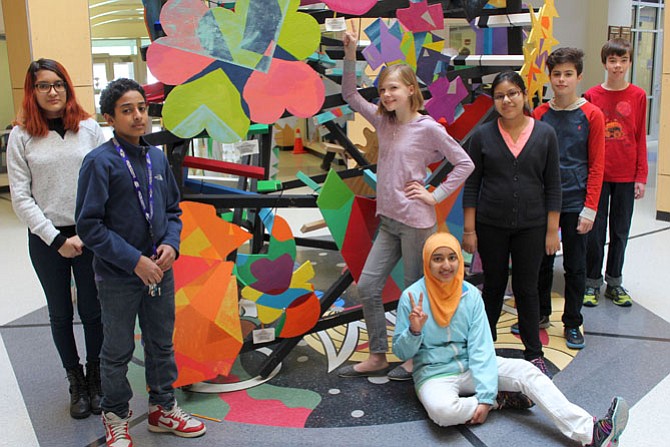 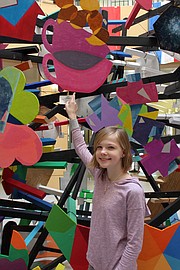 With power tools and the gift of color, Kenmore Middle school art students designed and constructed 39 coffee tables that went on display in the gallery space in Arlington’s Ballston Mall.

“It was really cool. There were these people that I don’t really know come to admire the things I created in my school,” Ryah Aziz said as she explained the excitement of participating in her gallery show opening. The public was invited to the artist reception and students from the class had an opportunity to network among potential buyers and admirers.

Jeffrey Wilson, Kenmore’s art teacher, explained the process that went into the project. Students worked with color studies to create notecards and designed the tables based on these individual shapes. “The color studies were based on the concept of color, light, layers, overlapping, and contrast,” Wilson said.

The seventh graders completed their project with power tools. With basic power drills and jigsaws, designer coffee tables were brought to life. And each student had a particular concept that inspired his or her piece.

Simon Alemu was stirred by his country flag of Ethiopia and explained his thought process: “I was thinking about contrast and the significance of the colors of nature. I tried to balance it all out.”

Giovani Congelio had a less specific theme to his concept and instead choose to develop a more abstract idea: “I like my table because it’s crazy, kind of random.”

Although Wilson’s class has worked on a table project before, he decided to build on the notion this year and he focused on the more technical aspects of the work. Aziz enjoyed the opportunity to work with tools when it came time to cut her table: “I don’t really have much experience with woodshop and power tools. I found that experience was very beneficial. It turned out pretty well in the end.”

Students also got a chance to work with a professional artist. Howard Smith, a local graphic artist, worked with them as they created their digital pages for the catalog. He also assisted the seventh graders with composition and their conceptual designs. Congelio appreciated the extra help and described meeting Smith: “I think it was inspiring.”

Some of the students took their artwork to the next level and offered their tables for sale to the public. To date, three of them have been sold, including tables by Noah Jeffries, Lamia Kaiser, and Jiji Mahgoub. All tables can be viewed at the online catalog. Students also created a short film to document the project. Both the catalog and the video are available on the school web site. The exhibit is currently on display at Kenmore.

Wilson explained how much the students enjoyed the complete process: “You have an idea and you try to make that idea come to life. Whatever it takes to solve it and build it and get the idea realized is a really great process and I wanted every student to have that experience.”