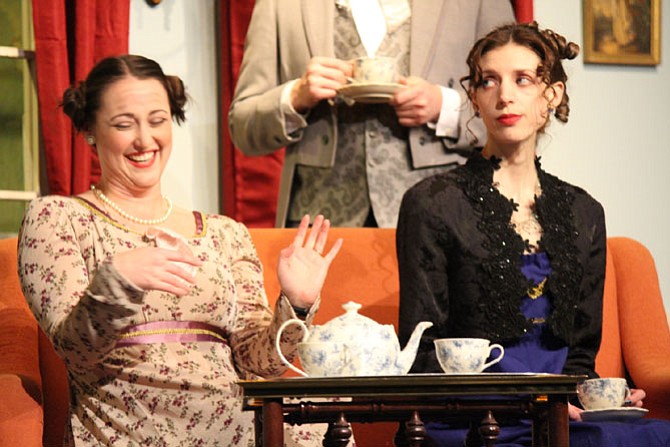 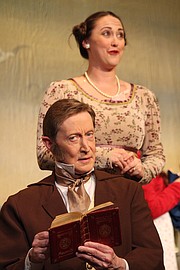 The play follows the humorous consequences of matchmaking gone wrong (and right) among the five Bennett sisters — Jane, Elizabeth, Mary, Catherine and Lydia — who have been raised well aware of their mother's fixation on finding them husbands and securing set futures.

Ayala-Bush said "Pride and Prejudice" provides an opportunity to showcase wonderful characters and situations, and she loves presenting period plays that allow you to transport yourself to a specific time and place in the past.

"It's adult playacting at its best," she said.

She said the play condenses a large novel into two hours of acting with multiple subplots, a large cast, each with their own agenda.

"With a cast of 16, it's important to have each of the actors understand and create the characters' backstory in order to allow the dimensions of the character to show on stage and to better engage with the other characters."

She added that a great deal of time was spent in understanding the relationships, motivations and the rationale for what each character is saying and doing in this play. In addition, the period of the piece requires specific manners, posture and accents to convey the time, situation and location.

Cal Whitehurst plays Mr. Bennett, an upper middle-class landowner in 19th Century England and a father of five daughters. Because he doesn't have a son, under the terms of his estate, the property will pass to a cousin after his death.

"He finds the highly feminine atmosphere in the house a bit overwhelming and often retires to his library for a little peace and quiet," Whitehurst said.

He said speaking with an upper-class English accent while not losing the meaning of the dialogue and the emotions behind the words was a challenge.

"Also, one has to maintain the very formal stance and gestures appropriate to the period." But because "Pride and Prejudice" is so popular, "My portrayal has to stand up against the preconceived idea of Mr. Bennett that many members of the audience will have based on having read the book or seen other actors in the part."

Whitehurst said he hopes audiences will find the same pleasure in the play that fans of Jane Austen find in her novels — and will get the chance to immerse themselves in a world very different from their own — a highly stratified society in which conventional behavior was strictly enforced.

"She understands little about proper manners and loves to talk," Norcross said. "Her greatest joy in life would be seeing all her girls married and [she] will do anything possible to see that happen."

She said the challenges in the role were the sheer number of lines and a short rehearsal schedule pocked with bad weather.

"Couple the amount of lines with antiquated language, an accent, and a character voice — that was a challenge," she said.

Jenni Patton plays Elizabeth Bennett, the "independent daughter" who is opinionated, strong-willed and smart, and with great heart for the people she cares the most about.

"She is very self-possessed, and isn't afraid to speak her mind or stand up for what she wants — but she is also gracious enough to admit when she's wrong," said Patton.

She said a challenge was working with Jane Austen's language and giving it life for a modern audience.

"It could so easily be stiff and boring, but it certainly doesn't have to be," she said. "There are cultural nuances that aren't obvious to a modern reader at first blush, and I've really tried to draw those out so the relevance, and at times the rather biting humor, doesn't get lost just because we don't talk that way anymore."

She said the emotional cadences of the story are so timeless, and this is one of the most enduring love stories of all time, precisely because it is at its heart the story of love's ability to break down barriers. "We can all stand to be reminded of that every now and again."

Gary Cramer plays Mr. Collins, a cousin of Mr. Bennet's who he has never actually met before. Cramer said, "From the start, it is clear that he's not going to be picky about which daughter he targets ... anything young and female will do nicely if she is 'an active, useful sort of person.'"

Being a bit pompous, lecherous, oily and tone deaf in the ways of wooing, Cramer thinks that his character is in the script for comedy relief purposes.

"Some of Mr. Collins' distinct habits are clearly indicated in the script, but the fun and challenging side of bringing an already quirky character to life is to add my own spin to it without changing the dialogue or the author's intent."

"As hard as it may be for some to accept the old-fashioned courtship behaviors, social niceties, and restrictions put upon women as shown in this play, it offers a good opportunity to learn a bit about how these thing were done in 'the good old days." He added, "It may even generate some after-show discussion about how much (or how little) things have really changed for the better in terms of setting the foundations for a good marriage since then."