People At Work: ‘Have To Choose To Believe’
Votes

People At Work: ‘Have To Choose To Believe’ 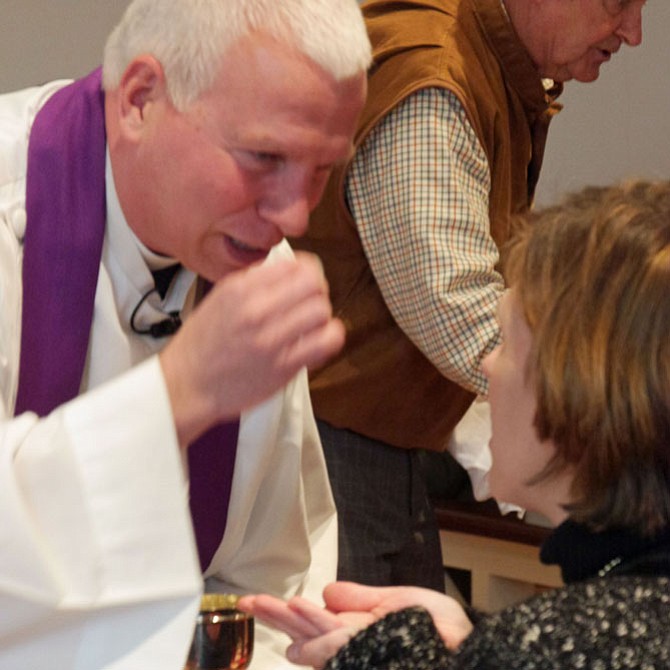 The Rev. Chuck McCoart offers the sacrament of water and wine symbolizing the body and blood of Christ at Communion during the service at Emmanuel Episcopal Church on the second Sunday of Lent. Photo by Shirley Ruhe/Gazette Packet 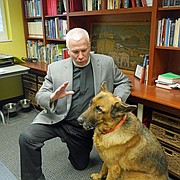 The Rev. Chuck McCoart’s 120-pound German Shepherd, Brock, accompanies him to church and waits patiently in the office for McCoart’s return after the Sunday service. 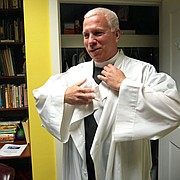 The Rev. Chuck McCoart dons the white robe, will add the purple Lenten scarf and tie on his belt, then head to the sanctuary for the Family Service at Emmanuel Episcopal Church on Russell Road. 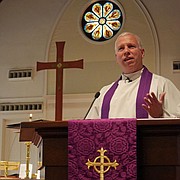 The Rev. Chuck McCoart reminds his congregation that holding on is worth the end result that will “blow your mind.”

The Rev. Charles C. McCoart Jr. (Chuck) tosses a dog treat to Brock, his 120-pound German shepherd, takes a final gulp of diet soda and slips the Lenten purple stoll over his white robe. This is the Second Sunday of Lent and the Family Service at Emmanuel Episcopal Church on Russell Road where McCoart has been since June 2013. He has welcomed 55 new families into the church since then. He says today there will be a children's message where he will compare a climbing wall that has handholds and footholds to what it is like following God — ascending higher — sometimes it's scary, sometimes it's tiring or exciting but it's worth it in the end.

McCoart said, "I believe the example of Jesus speaking in parables is a healthy model. My job is to find the modern day parable. I'm a storyteller," he said.

The organist begins Adagio in G Minor as parishioners filter in and find their places. Small faces sprinkle the pews. McCoart opens the service with The Decalogue which he said, "I've never done before. It highlights the Ten Commandments." He explains that he is still learning things since he has recently transitioned over to the Episcopal Church from the Roman Catholic Church where he spent the first 50 years of his life. "This just feels like the theology where I'm supposed to be, welcoming and diverse, more like me — things like the ordination of women, marriage of clergy and welcoming the gay and lesbian community."

McCoart moves to the pulpit and looks out at the congregation as if he is talking to each person individually. A parishioner comments that you feel like you are sitting in his living room and he is talking directly to you. "Everyone knows," he said, "about going through life and you feel like you just can't hang onto the rope. Life is peppered with challenges but just hold on and the reward will blow your mind."

Children line up in the front of the church and a ukulele leads tiny voices in "Lord I want to be a Christian in-a my heart" punctuated by red and blue bells wielded by several determined ringers. They move into Communion as rows of parishioners proceed down the center aisle to the front rail where they kneel side by side to receive the sacraments. McCoart invites all who seek God and who are drawn to Christ to participate in the Holy Communion, his blue eyes connecting with each communicant as he offers the symbolic wafer and wine.

As the service draws to a close the benediction is "Go in Peace … to the pancake breakfast downstairs" (twice postponed from Shrove Tuesday due to bad weather).

When he came to Emmanuel, McCoart says he had to pace himself for the marathon, not the sprint and also learn to say no: "I try to envision how to use my skills and gifts. But this isn't just up to me. We're growing together as a community welcoming everyone into the process of ministry, to be more and more the people God is calling us to be."

McCoart sais that he is the eldest son of a large Irish Catholic family, and God called him when he was 17. "It was the inaudible voice of God speaking to my heart saying 'this is what I want you to do Chuck.' It took a while for me to find my way because it was pretty overwhelming."

McCoart attended seminary from 1986-90 and held various positions in the Catholic church. He came to Emmanuel after serving for eight years as pastor of Good Shepherd Roman Catholic Church on Mount Vernon.

As McCoart explains his faith, he says from the time he gets up until the time he goes to bed he thinks about his church, responding to whatever needs have arisen. Every day turns out to have surprises and he has to triage what to do first. He sees the good in people and is a cheerleader for God "and I learned it is a sin to bore someone with the Gospel message of Christ so I try never to be boring," he joked. "It's not easy to love people who wrong you," he continued, "but we are called on to try.” Sometimes it takes a long time. "I try to remember those Bible verses like 'love your enemy' and 'rain falls on the just and the unjust'." For McCoart praying is like blinking. "It is so much a part of what you do that you can't separate it from yourself. The rest is the presence or awareness of God. You have to choose to believe. You have to exercise that muscle."