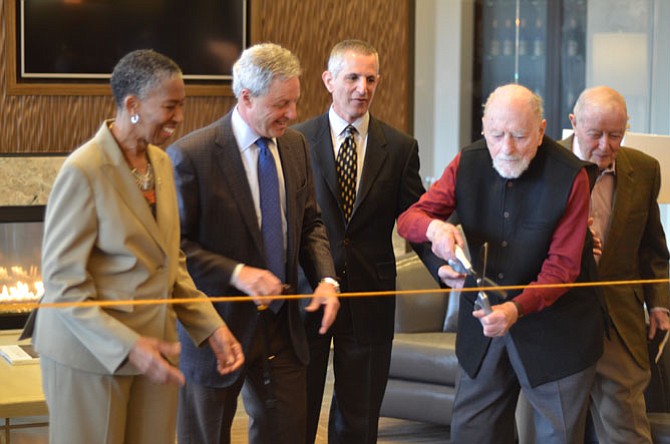 Despite an overcast afternoon, spirits were high on Saturday, March 14 at the Harrison, located at 1800 Jonathan Way in Reston. The luxury apartment community held a weekend grand opening, with a ribbon cutting ceremony on Saturday afternoon. Attending were local dignitaries including member of the Fairfax County Board of Supervisors Cathy Hudgins (D-Hunter Mill) and Robert E. Simon, founder of Reston. Promising resort-style living and easy accessibility to Washington, D.C., the Harrison is already taking tenants.

“Twenty-five percent of the 360 luxury apartments already have been pre-leased, and residents have started moving in,” said Shaneik Issac, a concierge at the Reston Harrison. The 360-unit project with two 14-story towers is an example of the development coming to the 50-year-old planned community of Reston. With the opening of the Metrorail Silver Line Stations, there has been an increase in residential development within Northern Virginia. The Wiehle-Reston East Silver Line station is within 2 miles of the Harrison.

Real estate development firm Renaissance Centro broke ground for the Harrison apartments in the summer of 2012. Located by Reston Parkway, the apartments have been described as an extension of the upscale Reston Town Center, and the buildings are in proximity to Reston Hospital, the Reston Regional Library, grocery stores, and childcare centers. The public was invited to tour the apartments during the weekend open house. “This has been an exciting morning to see this building,” said Hudgins. “Harrison is going to be an exciting place.”

Renaissance Centro managing members Albert H. “Sonny” Small and Douglas Erdman welcomed everyone at the Saturday open house, and said a few words before the ribbon cutting. “We are here today to celebrate a terrific opening,” said Small. “We want to create a community that will be around for a long time.” In addition to the Harrison apartments, Renaissance Centro also built the Stratford House and Carlton House located on Reston Parkway. Founded by Albert H. Small, Jr., Renaissance Centro has a 30-year legacy of recognized projects and a network of regional experts.

THE TWO TOWERS replace three low-rise apartment buildings, and construction and detailing is expected to finish in May 2015. Amenities the Harrison apartments offer include an outdoor rooftop pool, an indoor lap pool, a fitness center, an indoor spa, a yoga/Pilates room, a rooftop clubroom, on site concierge service and an executive business and conference center. A commercial demonstration kitchen and private dining room can be reserved for events and celebrations. The apartments are also in proximity to the W&OD Trail which stretches from Arlington to Loudoun County, as well as paths maintained by the Reston Association. The Reston Town Center and Herndon metro stations, part of the second construction phase of the Silver Line, are expected to open in 2018.

“The Harrison represents a wonderful addition to the Reston community,” said Ken Knueven, president of the Reston Association. “The Harrison represents a new direction with regard to the traditional apartment rental lifestyle. The Harrison focused its entire development on the value of community, both within the building as well as its immediate ties to the rest of Reston. Residents will be able to take advantage of all the wonderful amenities within the complex, as well as everything Reston Association has to offer. To me, that's a win-win,” Knueven said.

The Harrison offers spacious one-bedroom/one bath, two-bedroom/two bath, and three-bedroom/three-bath apartment homes some with dens. For residents' four-legged friends, The Harrison provides a dog park and pet spa. The nearby Reston Community Center offers classes, activities, and performances at its award-winning Center Stage. Architecture and design of the apartment high rise was made by Lessard Design, Inc. with building done by Paradigm Companies. Financing was made possible by Capital One Bank.

RESTON FOUNDER and visionary Robert “Bob” Simon joked the only thing the apartments lacked was an indoor ski resort. Simon encouraged everyone to take a tour of the building, and congratulated the designers and developers on their work. “The result here is probably the most outstanding single building in the world,” said Simon.