Luxury Apartments Popping Up All Over Northern Virginia
Votes

Luxury Apartments Popping Up All Over Northern Virginia 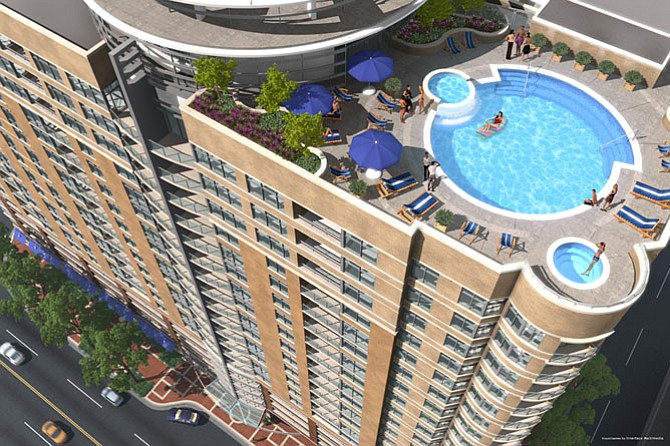 After a long, hard day at work, Jordan Coleman comes home to a large apartment with modern amenities, including a 24-hour concierge, ample living space, a state–of-the-art fitness center and a pool. The apartment features high-end appliances and finishes as well as an open, flowing layout and large walk-in closets. Coleman – a lawyer and Capitol Hill staffer – shares the pricey rent with a friend. The complex is owned by Avalon, which has properties in Arlington, Fairfax, Herndon, Falls Church, Tysons Corner and Vienna, Virginia, as well as Bethesda, Maryland, and Washington.

The demand for high-end apartments in the Washington, D.C., area is high, with rents soaring over the $7,000 mark. There are some who say the luxurious living spaces and carefree lifestyles are worth the extra money.

“There are two kinds of people who would be inclined to spend that kind of money in the luxury rental market,” said David Freishtat, who teaches in the Masters in Real Estate Development program at the University of Maryland and practices law in Potomac, Md. “First there are fairly successful, young people who buddy up and share an apartment with two or three friends. They can afford to spend 35-40 percent of take home pay in housing. They don’t spend much on food because they don’t have a family to feed,” he said.

“Empty-nesters who’ve sold their homes and decided to downsize are also inclined to rent high-end apartments. If they bought their house 20-30 years ago and sold it recently, they’re flush with cash,” said Freishtat. “They might be looking to buy a house in Florida or Arizona where there’s no income tax, but for the year and a half until they make that decision they’re going to live in a nice apartment because they’ve always lived in a nice house so they’re adaptable to those kinds of apartments.”

“The trade off in these buildings is that they are in great neighborhoods,” said Coleman. “They’re new construction and the layout is like you’re living in the suburbs, but with the convenience of living in the city. There are kitchens, bathrooms, living spaces are fluid and the closets are ridiculously large.”

Luxury apartment communities like the Gramercy at Metropolitan Park in Arlington offer easy access to public transportation and close proximity to restaurants and shops.

ONE OF THOSE NEIGHBORHOODS is Reston Town Center in Reston, Va., with restaurants and shops and public transportation. A new, luxury apartment building will has 360 apartments with easy access to such a lifestyle.

The Harrison at Reston Town Center is now open, promising 28,000 square feet of luxury, resort-style living, and an easy trip to downtown Washington, D.C. for work or play.

At The Harrison, where rent runs from just under $2,000 to as high as $6,650 a month, residents are offered such amenities as a culinary demonstration kitchen; a private dining room for wine tastings; a gaming area that offers pool, shuffleboard, chess, and card tables, a massage room, a spin studio and a 24-hour gym with state-of-the-art equipment. The pet-friendly property even caters to four-legged friends with a dog park and pet spa.

“People now want to simplify their lives,” said Karen A. Kossow, Vice President of Marketing, Community Realty Company, Inc. which provides leasing and management services for The Harrison. “They want an opportunity for a healthy and enriched lifestyle. For example, with the fitness center and lounge area, there are opportunities for socialization. You can keep youf pet here, and there’s even a place to walk your dog or give it a shower. If you work from home there are offices with a printer and fax and conference rooms where you can hold a meeting. These things just make your life easier and simpler and give you more time to enjoy life.”

Also at Reston Town Center is The Metropolitan, owned by Kettler, a real estate development firm based in McLean, Va., and which manages apartments throughout Northern Virginia. Residents at some of the firm’s properties pay more than $7,000 a month for features such as 17-foot ceilings, floor-to-ceiling windows, wood flooring and ceramic tile bathrooms.

Kettler is also putting the finishing touches on The Acadia, a 411-unit, high-rise luxury apartment building in the Metropolitan Park section of Arlington, Va., and plans to begin leasing units this spring. In October, the firm will begin construction on m.flats Crystal City. It will beKettler’s sixth property in the Pentagon-Crystal City neighborhood in Arlington.

“Our m.flats apartments are meeting a growing demand for living spaces within walking distance of work, shops and entertainment,” Robert C. Kettler, chairman and chief executive officer of Kettler, said in a statement. “Many young people are forming families later in life. As a result, they not only want to enjoy the vibrancy of city life, but live in an apartment that has many conveniences and amenities.”

Proximity to transportation is another bonus, said Jeremy Feldman of Bent Tree. “You have the Fairfax Connector and we’re near the Metro.”

Luxury apartments that offer residents access to public transportation are doing well. Twenty percent of the units in The Harrison have already been rented, even before its grand opening.