By Sharon Bulova, Chairman Board of Supervisors 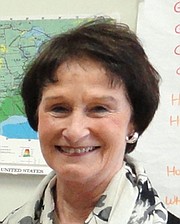 On April 28 the Board of Supervisors adopted the FY2016 Budget. Our board approved a total transfer to the schools of $2.01 billion, an increase of $66.7 million (an increase of 3.43 percent) over FY2015 and nearly two-thirds of all new revenue associated with increased property values. The total School Budget, which is comprised of the county transfer, plus state and some federal funding, totals $2.6 billion.

Education is our board’s highest priority; it is not, however our only priority. The school transfer amounts to almost 53 percent of our General Fund Budget. Public safety, human services, parks and libraries all receive a fraction of what FCPS does and these services are also critical to making Fairfax County one of the best places in the country to live, work, raise a family and grow older comfortably. It is also important that real estate taxes are affordable to our residents, many of whom are still struggling to get back on their feet following the recent recession.

Fairfax County’s Direct General Fund Budget, services and programs, excluding the School Transfer is $1.81 billion. This year the General County disbursements increased by only 2.06 percent, less than the increase in the School Transfer.

Fairfax County worked hard this year to advocate for a larger share of state funding for our schools. We were successful in receiving $9.9 million more than anticipated through the state budget. With these funds, FCPS is within $4.1 million of their total $2.6 billion Advertised Budget proposal; a gap of just 0.16 percent (sixteen hundredths of a percent) less than the School Board’s proposed budget.

The superintendent of Fairfax County Public Schools increased her request for a transfer after the state budget increase was announced and shortly before our budget adoption. More information about the Schools’ request and projections can be found here in the Budget Q&As.

In her April 28 release, the superintendent indicated this figure is now $7.6 million or 0.297 percent of FCPS Proposed Operating Budget. Enrollment estimates, and the associated costs, can and do change as the school year approaches and FCPS staff refines their estimates. The gap, therefore, is somewhat of a moving target.

Our Board of Supervisors continues to be supportive of the school system and our partners on the School Board. When the Board of Supervisors adopted the FY2016 Budget, we also gave county staff Budget Guidance for FY2017 which provides a planning target for an additional increase of 3 percent next year.

As we look ahead at the fiscal outlook for next year, we know that we will continue to be affected by a sluggish economy and the effects of federal cutbacks and sequestration. Like the schools, the General County side of the ledger is projecting a budget shortfall for the next (2017) Fiscal Year. This will have to be resolved, as Fairfax County is required to adopt and maintain a balanced budget.

This spring, the Board of Supervisors will lead the community in a Lines of Business review. This process will be a comprehensive review of all the programs and services the county provides. It will help the board to identify redundancies, establish further efficiencies, consider strategic changes to reach intended outcomes and, most importantly, make sure that the investments we make through the budget conform to the community’s expectations. In our Budget Guidance, we invited our counterparts on the School Board to participate and we hope they will undertake a similar process for FCPS.

I also hope that the School Board is able to fill the vacant Auditor to the School Board position they created in October of 2014. The Board of Supervisors has had an Auditor to the Board since the 1990s. This independent, critical perspective on the budget and county programs can help elected leaders identify efficiencies and cost avoidance opportunities and has saved taxpayers millions of dollars.

As you may know, the Board of Supervisors does not have line item authority over the FCPS budget. According to the Constitution of Virginia, that responsibility lies with the elected School Board, who set the funding priorities for the schools, including salaries. If teacher salaries are the School Board’s top priority, it is their responsibility to close the 0.16 percent gap between their proposed budget and the funds they are receiving.

Thank you to everyone who participated and contacted me during the budget process. Our board is always in a better position to serve residents when we have the benefit of your thoughts during the decision-making process.