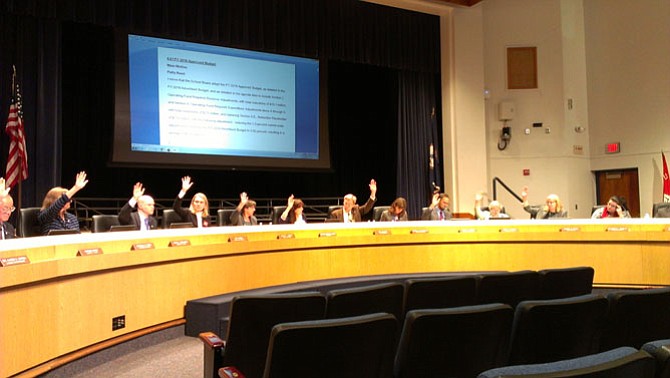 Public attendance during the School Board’s discussion of its Fiscal Year 2016 budget was significantly less compared to the May 7 meeting to approve adding “gender identity” to Fairfax County Public Schools’ nondiscrimination policy.

$7.6 million: That’s how much Fairfax County Public Schools said the School Board needed to cut to meet the goals set out in its Fiscal Year 2016 Advertised Budget.

When the board voted 10-2 on May 21 in approval of next year’s budget, covering that gap brought the step pay increase for employees down from a market scale adjustment of one percent to 0.62 percent.

More than 70 percent of the total budget of $2.6 billion comes from Fairfax County. The total transfer of $2.01 billion to the school system’s operating and debt service is over 52 percent of the county’s general fund disbursement. That rate has been “consistent” for several years, according to the Fiscal Year 2016 Advertised Budget Plan.

The county transfer is a 3.4 percent rise from the Fiscal Year 2015 adopted budget plan, a difference of $66.7 million. $1.83 billion of that goes to school operations, $187 million is the school debt service transfer.

In their Advertised Budget Plan, however, the School Board requested a $1.84 billion transfer for operations. They asked for a $70.6 million increase and got $56.6 million.

Some additional money from the Virginia General Assembly and a decrease in employer contributions to the Virginia Retirement system helped reduce that $14 million to $7.6 million.

The School Board’s Approved 2016 budget is a 2.2 percent increase over 2015, or $53.9 million. Though the budget team made $61.4 million in reductions, pushing back school start times, adding full-day Mondays for elementary schools, enrollment increases and reducing class size in certain elementary schools were all factors contributing to the increase from 2015.

COMING IN UNDER the market scale adjustment and its effect on employees, particularly teachers, was a main subject of discussion during the meeting.

“It all comes down to our credibility,” said Megan McLaughlin, representing the Braddock District. “Employee compensation is a top priority. Tonight, we’re taking one of our most important priorities and short-changing it.”

McLaughlin introduced two variations on a similar amendment to the budget that would each restore the full market scale adjustment. She proposed cutting the recurring funding that allows students to take Advanced Placement and International Baccalaureate tests for free, saving $5 million.

To buy time for additional community discussion and problem-solving, her amendments also called for Superintendent Karen Garza to set aside one-time funding to continue paying for students’ test fees in the 2015-2016 school year.

One of her proposed sources of that one-time funding was drawing from the school system’s flexible reserve fund of $8 million. That notion was an unpopular one among the majority of other board members.

Sully District representative Kathy Smith said drawing from the emergency fund as a one-time solution was “just not a fiscally responsible decision. You pray that you don’t need it.”

Elizabeth Schultz, representing the Springfield District, had prepared an amendment that proposed reversing the board’s recent decision to raise future members’ salaries in order to offset some of the budget reductions.

But after both of McLaughlin’s amendments failed, she said, “It s clear we’re not getting any traction.” Schultz then rescinded her amendment, calling it “shameful.”

During the discussion, board members voiced frustration with the Board of Supervisors for not fully funding their request.

“I’m very disappointed,” said vice chairman Ted Velkoff. “I feel like the supervisors have unwittingly validated the cynics — you’ll never be able to work with them.”

Velkoff said more help could come from the General Assembly. “The focus needs to shift to Richmond,” he said, where representatives are “failing to fund localities in the commonwealth. Frankly your Board of Supervisors and School Board don’t have the tools they need in order to solve these problems.”

At-large member Ryan McElveen acknowledged there are “always tensions between our two boards at budget time,” but that “none of us wants to make enemies of the Board of Supervisors.”

McElveen said John Foust (D-Dranesville) and other supervisors did “what they could for us.” But, he said, “We’re entering a new normal and unfortunately it’s pitiful, absolutely pitiful.”

IN HER STATEMENT announcing the vote, chairman Tammy Derenak Kaufax said, “We recognize that the Board of Supervisors cares about our great schools and shares our vision to make education our community’s top priority. We also recognize that there are no easy answers to our budget challenges. We will continue to work with the Board of Supervisors, along with state and federal representatives, to find solutions that support our students, families, teachers and staff, maintaining FCPS’ reputation for excellence.”

But acknowledging the projected $100 million deficit for the schools’ 2017 budget, she said, “Tomorrow we know the even harder work begins.” Referencing Garza’s publicly shared concerns over the future shortfalls, the chairman added, “Our ability to best serve our children is in jeopardy now.”

More information and resources about the FY2016 and FY2017 budgets are available online at www.fcps.edu/news/fy2016.shtml.