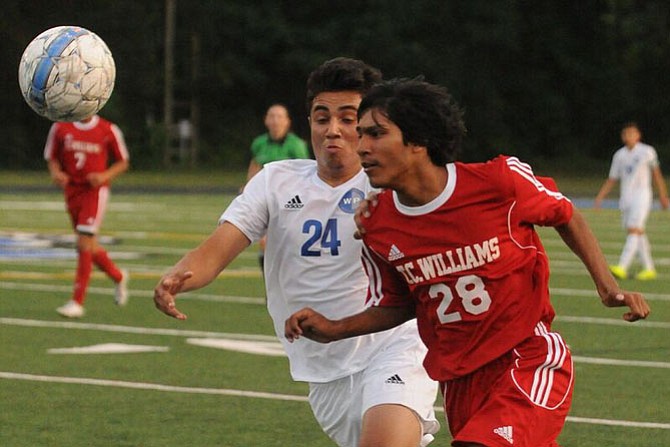 Conference 7 boys’ soccer rivals T.C. Williams and West Potomac wrapped up the regular season with a 1-1 draw on Tuesday night at West Potomac High School. While neither team added to the win column, the Titans and Wolverines each walked away feeling good with the postseason approaching.

For T.C. Williams, the defending state champion overcame adversity, tying the score in the 68th minute despite playing a man down after Emir Crnovic received a red card in the 56th minute. Senior defender Zach Eisenhour’s long throw found senior captain Ramsey Benzina, who finished with a header.

After going undefeated through the season’s first nine matches, T.C. entered the regular-season finale having lost two of its last four while averaging fewer than two goals per match. On Tuesday, the Titans failed to capitalize on numerous first-half chances, but put one in the net late to salvage a tie.

“It was definitely slow at first,” Benzina said, “and once we went one man down we knew we had to pick it up and we saw a little spark. But we need that spark every game. That’s the one we’ve been missing — that intensity and that passion — but it [showed] in this game and it’s going to keep on showing.

“... We have the talent, we have all the pieces, we just need that passion. It’s been lacking the past couple games, but it’s a great group of guys so we’ll find it — just in time for districts.”

The Titans (10-2-2) will host South County in the first round of the conference tournament on Friday. Will the momentum from Tuesday’s finish carry over? 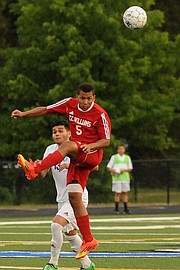 Freshman defender Kenneth Stoute and the T.C. Williams soccer team finished the regular season with a 1-all draw against West Potomac on Tuesday.

“That’s what you want,” T.C. Williams head coach Martin Nickley said. “That’s what you’re looking for. This was a really great challenge for us tonight because obviously West Potomac is a really good team and they kept coming, coming, coming the whole match. Even with that 1-0 lead, they were still attacking, still battling, still fighting. That’s a really good challenge for us to be able to come back and tie them.”

Eisenhour is confident results will come if the Titans maintain a high energy level.

“If we play with that intensity for 80 minutes, the goals will come,” he said. “We’ve been frustrated the last few games only scoring a couple goals, but if we can play with that intensity level for 80 minutes the goals will just start piling on. Sebastian [Hendi] had a bunch of chances in front of the net. Jason [Sookia] had multiple chances. He would have finished if [West Potomac] keeper [Nathan Christenson] didn’t play amazing. Their keeper had an amazing game today.”

The play of Christenson, a freshman, is one reason for West Potomac to be excited entering the postseason. It was Christenson’s second match in goal for the Wolverines and the first time he played a full match. Christenson made several key saves, including a game­saver against Sookia late in the second overtime period.

Moments before Christenson’s big save, West Potomac nearly took the lead, but a Wolverine's shot hit the right post.

“T.C. showed their strength with 10 players,” Sasso said. “... They showed great strength and character by getting the goal to tie the game. After that it was even both ways. It was a pretty good game. I was very happy about the outcome.”

Bright Somuah gave West Potomac a 1­0 lead with a goal in the 24th minute.

West Potomac finished the regular season with a 4­5­4 record and will host West Springfield in the opening round of the conference tournament on Friday.

“I promise you every game we improve,” Sasso said. “... Every game I see the strength, the character, the chemistry is getting there.”