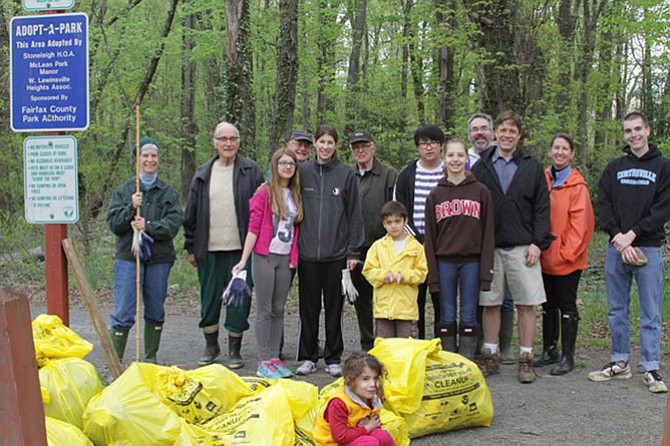 On April 25, 15 volunteers who cleaned up Saucy Branch Stream at McLean High Park near the junction of Westbury Road and Davidson Road Photo contributed

By Edward Monroe/Contributed to The Connection

For the weekend of Earth Day, on Saturday, April 25, local residents and students met at McLean High Park to stage a clean-up.

Youthful volunteers spanning several generations focused their efforts on the Saucy Branch stream that flows through the park. While the park clean-up is conducted annually through the local communities, this year it was linked to the larger initiative of the Alice Ferguson Foundation for a Trash Free Potomac Watershed.

Volunteers included those who enjoy the park as a forested walking space, while others appreciate its function as a natural stream corridor for fish and wildlife.

About 15 volunteers collected plastics and other wastes to be bagged, then removed by the Fairfax County Park Authority. Litter most likely gathered in the stream via its open waters and stormwater systems that extend west of Lewinsville Park and Lewinsville Center Park. Often, volunteers found that the litter carried downstream was snagged on branches and twigs for pick-up.

As a suburban stream in a developing area, the Saucy Branch appeared to be in both good and not so good condition. Stream bank erosion appeared active in places - exposing tree roots and bare soil. On the other hand, the erosion seemed more minimal and controlled where rock had been placed, known as riprap. And, while the park is host to a wetlands environment, invasive plants like the Multiflora Rose - once used in farmer hedgerows in old McLean – has now spread to reduce access to the stream for wildlife and for people to enjoy the rippling water.

Fortunately, the community is engaged in doing its part to move stream and park conditions in a healthy direction.

Many thanks to all the volunteers.