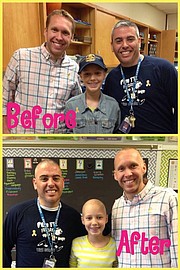 In top photo are (from left) Josh Douds, Tara Sankner and Bob D’Amato before the head-shaving. The men switched places in the bottom photo, after being shaved.

Tara Sankner is a 10-year-old Fairfax girl who’s fighting Astrocytoma Grade 2 brain cancer. She had completed 70 weeks of chemotherapy treatment that ended July 2, 2014; but due to tumor growth, she’s had to start a year-long, oral-chemo regime.

She’s in fourth grade at Lees Corner Elementary and, during the first round of chemotherapy, Tara experienced hair loss. So school Principal Bob D'Amato and the then math resource teacher Josh Douds let Tara shave their heads during the school’s morning news program to show their support for her and to let her know the whole school is supporting her through this battle.

So, in with keeping with tradition, this time when Tara unexpectedly lost her hair, D’Amato contacted Douds, who’s now vice principal at Union Mill Elementary, and asked if he’d shave his head again. He agreed and, on May 1, during the morning news program at Lees Corner, Tara got to shave both educators’ heads. She had fun doing it and said it lets her know the school’s still behind her as she again undergoes treatment.