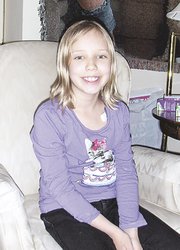 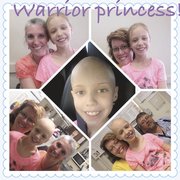 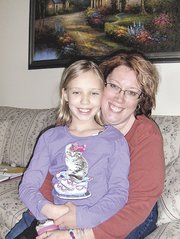 Tara and her mom, Tammy Sankner, at home, in March.

Just 8, Tara Sankner tires easily these days, doesn’t always feel well and even looks a bit different. But she’s still the same sweet, cheerful girl and, as far as her mother’s concerned, she’s “my warrior princess — the bravest girl I know.”

That’s because Tara, a second-grader at Lees Corner Elementary, is in the fight of her life, battling brain cancer.

“My day depends on how she’s doing,” said mom Tammy Sankner. “If she’s having a good day, I’m fine.”

“If not, we cry and scream with pain sometimes,” added Tara.

So, said Sanker, “We do a lot of cuddle time together.”

Tara enjoys painting and drawing, pitching in the Vienna Girls Softball League and reading the “Diary of a Wimpy Kid” series. She also likes “Mickey Mouse and all the Disney characters more than princesses.”

But that’s when she’s not worn out from the chemo. Her problems began March 8, 2012. Her dad Craig is a letter carrier with the U.S. Post Office in Oak Hill and her mom’s a medical biller who works out of Inova Fair Oaks Hospital. So Tara goes to a babysitter in Chantilly after school.

“She and the other children were outside and she’d fallen and scraped her elbow,” said Sankner. “Then she said she didn’t feel good, and she had a seizure — her whole body convulsed for 10 seconds. I was already driving there to pick her up and arrived immediately afterward. We called an ambulance and went to [Inova] Fair Oaks’s emergency room.”

A CAT scan revealed a spot on Tara’s brain, so the ER doctor called her pediatrician — who’d done her 7-year checkup, the week before, and given her a clean bill of health. The pediatrician ordered an MRI done and it found two spots on her brain. But at that time, said Sankner, doctors thought Tara had encephalitis caused by a common cold.

“They then did a spinal tap and transferred her to Inova Fairfax [Hospital] for 10 days for IV antibody treatment,” said her mother. “Then she got post spinal-tap headaches and anemia and needed a blood transfusion.

Returning home, Tara had follow-up exams by the Neurology Department of Children’s National Medical Center and MRIs every three months. In August 2012, she had a 48-hour EEG (electroencephalogram) to make sure she wasn’t having any silent seizures. Then her care was transferred to Dr. Roger Packer, head of that hospital’s Neuro Oncology Department.

“There was no change until the beginning of December 2012,” said Sankner. “I noticed Tara was having short-term memory issues and problems in school remembering what she’d just heard in class. So I called Dr. Packer and, on Dec. 18, he did another MRI and a full neuropsychological evaluation, as well.”

That’s when doctors realized that the front left cortical lesion on Tara’s brain had grown. “Then a third spot popped up,” said Sankner. “They’d thought it was a cyst, the year before, but it looked like the other two spots now. So we went to the neurosurgeon, Dr. John Myseros, at Children’s; and on Feb. 13, he did a brain biopsy at Inova Fairfax.”

It was sent to Johns Hopkins Hospital for a clear determination and, on Feb. 26, Tara was diagnosed with an astrocytoma, a type of brain cancer that’s treatable, but never goes away. “It can potentially go into remission and resurface 10 years later,” said Sankner. “Because she has a spot in her brain stem, they can’t operate there. Another’s in her mid-thalmus and the other’s in the left front cortex.”

And for all they know, there could be more. Said Sankner: “Dr. Peter Burger at Hopkins thinks all three spots are connected underneath and are just what’s visible on the MRI.”

After such a diagnosis, Sankner wondered why and how something so terrible had happened to her only child. “She had no other symptoms — no headaches, weaknesses or other seizures,” said Sankner. “I couldn’t talk, I felt lost, I was crying. I was thinking, ‘This can’t be; no, they’ve got the wrong diagnosis.’ It didn’t click to me that day that it was cancer until the nurse practitioner said, ‘We’ve got to stop these cancer cells from growing.’”

“Once I realized it, I was completely devastated,” said Sankner. “But I decided we’d take it a day at a time and see what the doctors wanted to do.” Tara’s now under the care of Dr. Jeffrey Knipstein, an oncologist at the cancer center in Falls Church affiliated with Children’s. And Sankner’s compiling a binder of her test results, consults, bills and any organization that’s helped their family.

Tara knows she has cancer, said her mom, “But not to what extent — she’s 8. She said, ‘Mommy, I’m sorry this happened,’ and I tell her it’s not her fault. I call her my rock star because she’s been a rock through this whole thing. She’s not letting this get her down; she’s telling me, ‘We’re going to get through this.’”

She started chemo March 13 and, in preparation, her class at school gave her a backpack full of arts and crafts to do to keep her occupied, as did her mom’s co-workers. “Her teacher, Vicki McGorty, has been phenomenal,” said Sankner. “She calls me every night before and after chemo — and even during spring break — to check on Tara.”

And, added Tara, “She visited me and gave me the last three “Wimpy Kid” books.” McGorty also joined Tara and her mom last Thursday, April 12, after Tara reached a milestone in her condition.

“Tara decided to take charge of her hair,” said Sankner. “It was really falling out, so we went to get it shaved off. She was awesome and I couldn’t be prouder of her. I get a lot of my strength through her.”

Since Tara’s medical bills are more than her family can afford, McGorty and Fair Lakes resident BethAnn Telford — also fighting brain cancer — put in motion some fundraisers for them. Rita’s Italian Ice held one last week, and on Saturday, April 20, from 6-9 p.m., Tara will have a fundraising table at Chantilly High’s annual Track-A-Thon. She’ll also receive part of the proceeds from the Joe Cassella Foundation 5K Race, May 19, in Great Falls.

“I think it’s amazing how the community has come together to help, and so quickly,” said Sankner. “I never thought, in a million years, that I’d have a child battling any sort of condition and that we’d need help. She’s my only child — my life revolves around her.”

“When Tara’s having a tough time, I sit there helpless and think, ‘Why can’t I take this away? Why can’t it be me, instead of her?’ That’s my hardest part. I’m a mom and that’s what moms do — but it doesn’t make it any easier or make the tears stop flowing.”