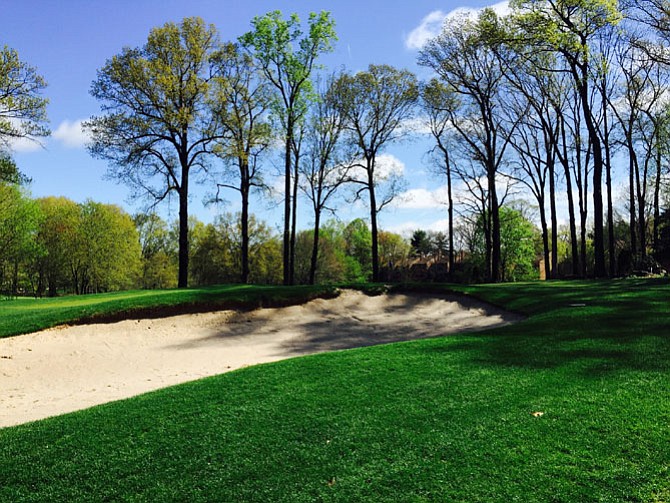 Connie Hartke, of Rescue Reston, sat in Fairfax Circuit Courthouse courtroom 4E for more than two hours Friday, Nov. 6 just as she did at the Board of Zoning Appeals in April.

Again, Hartke listened to an attorney for RN Golf suggest or hope that some judicial or county authority promise some type of assurance that it be allowed to develop Reston National Golf Course or parts of it for residential housing.

“When will they understand that no means no,” said Hartke, outside the courtroom.

Minutes before, inside the courtroom, Circuit Court Judge Michael F. Devine made a ruling that protects Reston National Golf Course from being developed, at least until the owners of a golf course navigate the proper channels to seek a land use change, or continue to appeal this case.

“The circuit court ruling on Friday, Nov. 6, is considered a defeat for the owner of the golf course and is significant because any redevelopment of the course must now be preceded by the filing of specific plans with the county, which will then be compared with the ‘Development Plans’ approved in 1971,” said John McBride, RA’s legal counsel.

“These plans are in the county zoning files and clearly limit use of the land to a golf course, open space and driving range. Any change to these approved plans will require amendment approval by the Fairfax County Board of Supervisors. The golf course owner had sought to avoid this requirement for a plan amendment by seeking by-right use status for a number of residential and other uses.”

“The property owner of Reston National Golf Course is back to square one. Their choices are: appeal to Virginia Supreme Court, follow County process to attempt a land use change, accept that no means no,” she said.

Hartke said that golf course investors knew that the property was designated as permanent open space before they invested in the golf course in 2005. “They’ve been told the same at least three times since then,” she said.

THE HEARING lasted two and a half hours, and first included legal debate over which sets of attorneys should be included.

Randall T. Greehan represented Rescue Reston. “We’ve got landowners relying on the zoning,” he said. “This land is intended to be a golf course and open space, that is what the plan says.”

“This land is intended to be a golf course and open space.”

McBride represented Reston Association. “Back to square one, which is exactly where we should be.”

And Scott D. Helsel represented the owners of RN Golf. “I’m asking, what is the existing zoning’s permissible uses?”

Laura Gori represented Fairfax County. In the end, it was her motion for summary judgment that Devine ruled in favor of.

“RN Golf was only seeking an advisory opinion,” she said, when it made its appeal to the Board of Zoning Appeals. “RN Golf didn’t submit any development plan.”

“The issue does come down to whether RN Golf had the right to appeal to the Board of Zoning Appeals,” said Judge Devine.

“The appeal here by RN Golf requires it has to be aggrieved,” he said. “In this case, there is no denial of a right; nothing has been changed.”

“Is residential use a by-right use? We say it is. Zoning appeals says it is not,” Helsel said.

“There is a significant cost to submit a PRC plan that could be dead on arrival,” said Helsel, tallying a $100,000 application fee and half a million dollars necessary for engineering, environment, sewer and stormwater plans to be able to submit an application,

“That’s an expensive way to find out an answer to the question we want an answer to,” he said. “Every landowner has a property right under existing zoning.”

Devine said the cost doesn’t add up to being aggrieved or harmed.

“You’re not stopped from doing anything,” said Devine. “It doesn’t prohibit you from submitting the plan.”

RESTON ASSOCIATION’S CEO, Cate Fulkerson, was pleased by the ruling. "Now, if pursued by the owner of the golf course, any proposed redevelopment of the golf course property or any portion thereof will have to go through the proper county and community review process,” she said.

The next round is still to be determined.

“We are pleased with the court’s ruling which requires that RN Golf must go through a formal plan process before it can redevelop the golf course,” said Hartke. “However, while we have won this round, the fight is not over and RN Golf still has other options available to it, including appealing today’s ruling or attempting to amend the Fairfax County Comprehensive Plan. We must remain prepared to continue the fight so long as RN Golf remains committed to its attempts to destroy our community’s valuable open space.”